The final day of Iceland’s 2019 Dark Music Days festival was characterised by a back-and-forth between prosaic and profound. The penultimate concert i attended, titled ‘Sound Mass’, was an extreme case in point. Once again located in Harpa’s Kaldalón Hall, of the three works performed it was hard to do much more than shrug at Þórólfur Eiríksson‘s short electronic work Rafboð [electrical signals]. Though technically a brand new piece, receiving its first performance, it could have been composed half a century ago; not in itself a problem (the composer’s stated aim was to create a “pure old school electronic piece”), but its conveyor belt of ephemeral morsels were of literal passing interest only, superficial shapes that entirely failed to cohere into a meaningful larger whole. At 30 minutes, Circular Flow by Ríkharður H. Friðriksson was a lot bigger but hardly much better. To look at the plethora of pedals and boxes surrounding Ríkharður, processing the output from his pair of guitars, one expected something quite spectacular. Yet what ensued was like a cross between Aidan Baker and Markus Reuter, but lacking the brooding intensity of the former and the passionate, free-wheeling invention of the latter. It was hard to believe such a quantity of technology was required to create such elementary ambient, clichéd plinky-plonk guitar noodling utterly drenched beyond saturation point in reverberation. Circular Flow was far from an unpleasant experience – in fact it brought to mind soaking in the hot pots at the local swimming baths, the deeply relaxing way most of my days during the festival began – but it was impossible to take seriously music that so grandiloquently pretended that meandering was searching, and that artificial reverb and echo were a substitute for genuine profundity and depth. 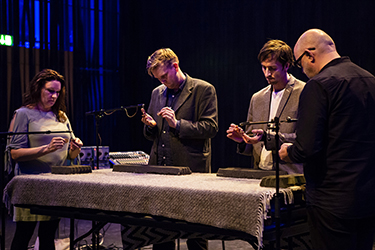 Through much simpler means – just a cluster of electronic tone generators and eight gold bullion coins – Niels Lyhne Løkkegaard achieved something immeasurably more impressive. His Music for Krügerrand began with the coins being struck together like crotales (each of the four players wielding two coins) and held close to microphones, greatly amplifying their softly vibrating high frequency resonances. As they began to overlap more, the effect became a more cogent cloud of pitch (spanning roughly a minor third), shimmering due to the beats caused by their close proximity. It was a piece best listened to with eyes shut, and not only because it prevented one being distracted by the players’ actions but because it meant it wasn’t immediately noticeable when Løkkegaard began to introduce the generators. With closed eyes, i slowly began to realise that some of the resonances were lingering far more than seemed possible – until the realisation dawned that the coins and generators were now coexisting and coalescing into an even more intricate mélange of gently clashing high frequencies. i’m guessing Løkkegaard opted for bullion coins in order to obtain a purer resonance when they were struck together, but either way, Music for Krügerrand was completely riveting, a kind of miniature firework display made up of discreet little sparks colliding with each other somewhere in the atmosphere.

The self-styled “Grand Finale” of the Dark Music Days brought to Kaldalón Hall the Reykjavik Chamber Orchestra and conductor Bjarni Frímann Bjarnason, for an all-Icelandic programme. Of the three shorter works in the concert, the world première of Ingibjörg Ýr Skarphéðinsdóttir‘s að elska er að sökkva [to love is to sink] was practically impenetrable. The four players faced away from each other; walked around the space arbitrarily; toyed with a few ideas, all of them essentially gestural; acted independently though at one point all ended up in the same register; the flautist broke off for a time to stroke an amplified cactus while reciting poetry (again, no text/translation was provided). The piece might have been mildly amusing if it hadn’t gone on and on for so long; its eight-minute duration passed infuriatingly slowly. i can only guess, using the work’s title as an absolute last resort, that að elska er að sökkva was some kind of testimony to a romantic experience that proved to be not entirely buoyant. 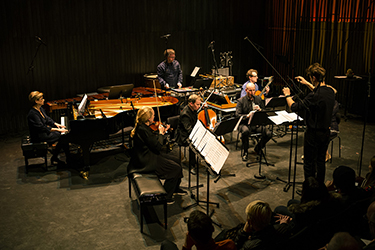 Helgi Rafn Ingvarsson‘s new work Loom, also a first performance, made a striking impression despite being almost so brief that it seemed to have barely begun by the time it ended. The orchestra, initially giving the impression of waking and warming up, struck an interesting balance between sounding individual and acting as a group, their material nascent, slightly whoozy and sleepy. Arriving at a sustained point acted definitively to unite everyone, their music becoming lively and light, leading to a kind of inverted plateau similar to the opening. Equally brief and arresting was Fields by Anna Thorvaldsdottir, being performed for the first time in Iceland. An exercise in low register, avant-garde noir, a lyrical cello and double bass duet wended its way within an unsettled, somewhat oppressive atmosphere of rumbles, clicks and bursts of noise. The work has a conflicted quality, both meditative and obsessive, split between calm and restlessness. Its unstoppable melody – later joined by bass clarinet – suggested a kind of determination in the midst of encroaching nightmares.

Steingrímur Rohloff‘s The Sinus Experience exhibited a dichotomy that had been something of a recurring theme throughout the Dark Music Days festival: stark alternations between inscrutable, somewhat indefinable quantities of pitchless gestures and highly lyrical episodes. Here, the music elastically oscillated so that melody acted as a focus, gathering the players together, interspersed with more chaotic passages. The impulse to work together seemed to be of greater significance, developing beyond melody, the ensemble falling into new patterns of group behaviour like a cluster of friends collectively following their noses (bearing in mind the title, no pun intended). However, something of the earlier oscillations remained, these group behaviours sometimes splintering into multi-faceted ideas before uniting to articulate near-unison lines. Hearing the orchestra flex in this way was fascinating, as was the even more demonstrative conclusion, Rohloff ramping things up to a clamorous series of swells before causing everything to evaporate.

But the standout piece in the concert was unquestionably Eq. IV: Windbells by Hugi Guðmundsson. From the outset it was exquisitely beautiful: rich, consonant chords that sounded as if they had been rained upon, causing their clarity to be obfuscated such that they retained much of their identity while being coloured by a myriad microtonal distortions. This established the harmonic tone for all that followed; only occasionally would things settle and become stable for a time, the players here preoccupied with gentle figurations. As for the rest, Hugi progressively broke things up (or should that be down?) from sustained notes to small, resonant attacks before rudely shattering the mood entirely, the orchestra now loud and frantic. The music subsided but remained spritely, quasi-honky tonk tunings in piano and guitar acting like rapid ripples running across every phrase. Wonderful.

[…] hear music by Icelandic composer Ríkharður H. Friðriksson. Though i’d been underwhelmed by his performance at the Dark Music Days in January, his fixed media piece … e mezzo, heard in the reverberant Niguliste Church on Friday […]