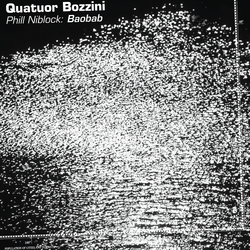 One of the more memorable events at last year’s Huddersfield Contemporary Music Festival was the late night concert at Bates Mill given by Quatuor Bozzini, featuring music by Éliane Radigue and Phill Niblock. A few weeks ago, the Bozzinis released an album featuring two works by Niblock, including the one they played in Huddersfield, Disseminate as Five String Quartets. i have to admit that i was sceptical about the extent to which the experience could be adequately captured in a recording. Niblock’s endless waves of juddering pitch had made Bates Mill seem not simply filled but saturated, one minute feeling as though we were submerged in water, the next suffused with dazzling light. Either way, it was a veritable flood.

This recording goes a long way to living up to that mesmeric live encounter. Both works, in fact, inhabit this same soundworld, both starting life as orchestral pieces that Niblock reworked for a live string quartet plus four additional prerecorded quartets. Disseminate as Five String Quartets sets out with only the implication of stability, harmonically complex from the outset with something that may or may not be dronal at its core. This develops into a conflict where apparent stasis (the piece, after all, is built upon slow moving, drawn-out pitches) is continually undermined by strange undulations and shifts in its tonal makeup. Often, one becomes aware of something only after it’s actually been present for some time, and it’s similarly difficult to track the evolution of the work’s harmony, which from around halfway through has become seriously smeared, still dronal but tonally clusterfucked.

By contrast, Baobab begins in the utter clarity of octave unisons, which gradually shift out of alignment, allowing other notes (at first, only fifths) to encroach. Due to the proximity of the near-unisons in the first third of the piece, the combined texture resembles a vast squadron of planes, or perhaps the aural sensation of sitting at the dead centre of a hive of bees. Alien pitches in this context seem all the more jarring, threads out of alignment in an otherwise perfect weave, leading to a lengthy central episode where the opening octaves could hardly seem more distant. All the same, Baobab doesn’t explore the same range of harmonic complexity as Disseminate, instead playing more actively with how stable the music seems, on one occasion dropping out the lower register notes to give a brief illusion of balance.

With both pieces it’s more than usually the case that how one perceives them is going to be entirely unique. This is not merely due to individual perception, but the way and the specific locations (harmonic locations, i mean) where one focuses attention, which can be radically shifted by the slightest turn or tilt of the head, drastically altering the apparent pitch-content and pitch-emphasis of the music. It’s perhaps never been more true that multiple listens to the same recording result in completely different experiences.

The Bozzinis excel at this kind of intricate, infinite music – what we might call ‘upper case’ ambient – and it’s no hyperbole to say this recording really is almost as good as having them there in the room with you. Apropos: i’d recommend not listening to this album through headphones, which for me had the effect of making the textures sound reduced and diminished, even somewhat deadened. To get the desired effect, be sure to play through speakers – loud! – and thereby be overwhelmed by Niblock’s endless, extraordinary flood.

Phill Niblock: Baobab is available on CD from actuellecd and as a digital download from Quatuor Bozzini’s Bandcamp site.