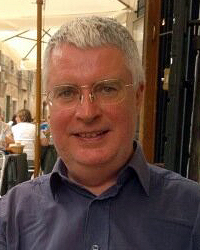 British composer James Clarke‘s output has moved away from having poetic or allusive titles, and for the last 12 or so years his works have either been given a codename indicating the year followed by a letter (e.g. 2013-V) or are simply ‘Untitled’. The fact that the latter are numbered suggests, if not continuity, then at least a putative connection, though the instrumentations of the Untitled works vary widely: a large ensemble (No. 1), piano and orchestra twice (Nos. 2 and 8), solo piano on three occasions (Nos. 3, 5 and 7), voices and string quartet (No. 4) and soprano and five players (No. 6). The latest, Untitled No. 9, composed in 2017, is Clarke’s first to be written solely for orchestra. It’s an episodic and elemental piece, two qualities that are in many ways at odds, the episodic structure indicating organisation and clarity, acting in opposition to the elemental nature suggesting wildness and untempered behaviour. Brought together in Untitled No. 9, the result is unsettling yet beguiling, and in an unexpected way they end up complementing each other.

The piece really is all or nothing, either unleashing the full force of the orchestra in vast, dense, unwieldy eruptions or compressing it down to almost infinitesimal levels of barely detectable activity. The shifting focus and, more importantly, its wide sense of depth and perspective suggests Clarke has the orchestra under a microscope, twiddling its dials to view different elements at varying levels of magnification. This sense is important as, in general, individual ideas in Untitled No. 9 are less interesting than the way these ideas interact with and follow each other. The work’s huge opening salvo, for example, sounding like a chorus of squeezeboxes pushed almost to breaking point under incredible amounts of pressure, though enormously striking remains somewhat anonymous and impenetrable until a brief moment of clarity, 30 seconds in, reveals just a couple of pitches. This tiny detail is immediately swamped when the melée resumes, but the musical perspective has changed.

Likewise, elsewhere Clarke often sets things up such that a more demonstrative idea – gently hopping woodwinds; loud brass blurts – is layered above something more static and/or slow-moving, usually taken by the strings, who at various points in the piece lurk and shiver in the background. As such, the strings are responsible for the most miniature material in the piece, sounding even tinier in the wake of the brass (who throughout Untitled No. 9 are, to say the least, incorrigible, always tending towards clamour rather than calm). They’re responsible for some of the most memorable music in the piece, agonisingly tender and delicate, and all the more tantalising for co-existing in such a harsh sonic habitat.

Which is not to suggest that Untitled No. 9 is just beautiful or brutish. At the opposite extreme, many of the more powerful episodes are marvellous to behold: the strings using their bows like scimitars, loudly slicing their instruments; a sequence of brass swells microtonally slip-sliding their way upward, and later transitioning into string accents gradually winding down. These are mesmerising ideas that take Bruckner’s approach of organising orchestral structures in big blocks to an altogether more flamboyant and effusive level. It’s not all chop and change, though, there are structural interconnections to be found, certain ideas from earlier that return: loud brass outbursts yielding to reveal tremulous strings (around the 5-minute and 8-minute marks), the scimitar strings that start slashing again later on, and the minuscule string details from near the start that make a late reappearance shortly before the end. Elemental Untitled No. 9 may be, but it’s never out of control, always subject to a discreetly guiding creative presence. Indeed, the dramatic end of the piece could and perhaps should be heard as a return to (or an extension) of its beginning, not materialising fully-formed as at first but now assembled note by note, each pitch forming a single stratum within an increasingly dense orchestral rock face.

The world première of Untitled No. 9 took place at the 2018 Tectonics festival in Glasgow, performed by the BBC Scottish Symphony Orchestra conducted by Ilan Volkov.

This is shaping up to be another fine Lenten collection of pieces, Simon! This particular one reminded me very much of Xenakis on first listen – never a bad thing. Very little late Rubbra to be had, though, disappointingly.

Hear hear, Chris. We could well do with having some late Rubbra on this blog…

Unlikely to happen, Dan. Not only are all mentions of late Rubbra on this blog (bar the first) nothing more than a running joke, I strongly suspect it’s a joke that needs to stop running…