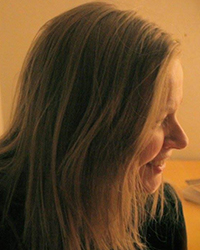 One of the things i particularly enjoy when listening is the sense of not knowing where i am, uncertain of what exactly the music is doing or where it’s going: of being kept, for a time at least, in the dark. It’s this kind of ‘darkness’ that i think typifies the orchestral piece In Praise of Darkness, by Icelandic composer Kristin Þóra Haraldsdóttir.

Much of the work’s first half exhibits an interesting ambivalence, caught between impulses towards reticence and confidence. The latter can be heard both in a repeated-note idea that appears near the beginning, starting in low flutes and migrating through the winds, but most strongly in loud, deep notes intoned by the brass. The former manifests in a more global sense of caution that pervades the whole orchestra, in which sounds feel placed with fastidious consideration and care, and where no particular idea has sufficient impetus to cause a catalytic effect. As a consequence, details emerge and dissipate, and everything seems to be hanging in space with the range of movement of a mobile.

Change comes, around the halfway point, in the most unpromising of ways: a slow dissolve reveals a vague, slightly moaning motif in clarinet and bassoon, which gains momentum like a steam train starting up, gradually developing into a dronal, communal motivic behaviour. The strings take it over, their oscillations eventually flattening it into a thin, tremulous band. When this too dissolves, solitary pitches – like the end of an imagined melodic phrase – precede a passage featuring more dense but still pitch-focused clusters, initially wide then becoming more high and narrow. This in turn leads to a sequence of swelling undulations, through a collection of pitches forming a complex suspension – quite ‘fifthy’ but muddied by deep registers – before becoming a clear perfect fifth alongside a plaintive oboe and bassoon.

Throughout all of this, there’s the palpable sense of an orchestra (and maybe a composer) following its collective nose, groping around in the dark, discovering and handling things unseen, trying to figure out what they might be. The word ‘handling’ seems significant: there’s something deeply tactile about the way each new idea is encountered and pondered, and the ambiguity of the nature of these ideas, their short- and long-term significance (if any) and of the whole dramatic/structural nature of the piece lends the music a heightened, disorienting atmosphere that’s potent, immersive and full of tension. It’s the best kind of darkness: freeing and firing the imagination to try to resolve what the music keeps deliberately obscure – a darkness definitely worth praising.

The first UK performance of In Praise of Darkness took place on 6 May 2018 at the Tectonics Festival in Glasgow, performed by the BBC Scottish Symphony Orchestra conducted by Ilan Volkov.