Nearly but not quite everything that took place at this year’s Borealis festival was light years away from the world of conventional concert performances. The most notable exception to this was the first event i attended, at the Nykirken on Friday evening, given by Sjøforsvarets musikkorps, the Norwegian Naval Forces Band, conducted by Ingar Bergby. They presented three works, two by Norwegian composers and the other by British composer James Clapperton. Written in 2012, Clapperton’s Doroga Zhizni was by far the most overtly earnest of the three pieces. A saxophone concerto written as a commemoration of the Siege of Leningrad, it was difficult to know to what extent this considerable layer of baggage helped or hindered the work. Which is not to say it wasn’t an enjoyable experience. Though its musical language was staunchly conservative, often channelling post-minimalistic prettiness, the interplay between soloist René Wilk (for whom the work was written) and the band was at times highly dramatic. This was the piece at its best; when Clapperton sought to tap into the emotional heft of his subject the music became a generic kind of insipid ‘In memoriam lite’, pseudo-emotive blather that did its inspiration neither any favours nor sufficient justice. It would perhaps have been best to hear the piece without any knowledge of its supposed backstory; as it was, reconciling what we heard with Clapperton’s aspirations proved all but impossible. 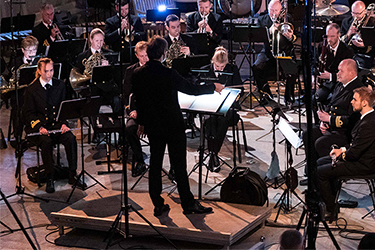 It was also quite difficult to square the notes for Therese B. Ulvo‘s Excavation – which spoke about digging away at the brilliance and beauty of the wind band, causing it to be “stripped down to its bones”, and exploring what remained – with the music itself, but in practice it hardly mattered. The piece threw together various opposites, initially managing to sound simultaneously refined and primitive (distantly evoking something of Stravinsky) and putting equal emphasis on melody and noise. In addition to this, while the band as a whole were generally in consensus about their activities and behaviour, the harmonic nature of the music floated completely freely. Only later did it more demonstratively draw nearer to the implications of its title, ideas becoming ‘stuck’ and being explored at length, almost as if they were being worn down and eroded. The weirdly fanfaric way Excavation developed a fin de siècle quality later on was fascinating and the latter half of the piece in particular was deeply engrossing, ultimately unleashing walls of noise so enormous they practically blew themselves out. Best of all was Ørjan Matre‘s Instant Music, its six short movements acting like windows into distinct and alluring sonic worlds. Veering between intense focus and a sprawling sense of direction, between bubbly turbulence and introspection, Matre made each piece just the right duration while leaving one keen to hear more. Despite their brevity, the amount packed into them was often considerable, particularly the crash-bang-wallop fifth movement that sounded like a collection of science experiments bubbling and exploding at random. Yet more compelling, though, were the quieter passages, nowhere more so than the final movement, blissed out and solemn at the same time, a long melody unwinding over dissonant low chords and occasional distant bells. Gorgeous. 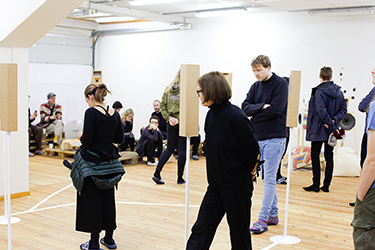 Saturday afternoon at Borealis brought the opportunity to hear two multi-channel works at Wrap, an artist-run space to the south of the city, in the imposing shadow of nearby Mount Ulriken. While elaborate multi-channel speaker setups continue to be regarded by rather too many as the ne plus ultra of electronic music presentation, things here were more than a little different – for the better. Speaker Park is an audiovisual initiative comprising 24 speakers, all of which are handmade and essentially unique in design. While some took the oblong form of conventional loudspeakers, many if not most did not: a few resembled plant-like trumpets emerging from the ground, others were wrapped in knitted yarn and suspended from an ornamental tree, some were skeletal, their drivers crudely attached to skeletal frames, while one playfully looked like an alien, its single woofer and twin tweeters acting, depending on your interpretation, as eyes, mouth and/or antennae. Being conceived as a park, the idea is that the 24 speakers are arranged throughout the space with the audience free to move around them at will. 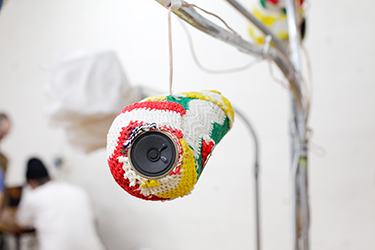 We heard two works by Mari Kvien Brunvoll and Antti Sakari Saario, and the first thing to say – and it’s important – is that from the outset there was absolutely no indication that we were listening through a comparatively rudimentary speaker system. This fact was instantly immaterial: the sound was rich, detailed and clear, it not only filled the space but emphasised both the scale and shape of the space, and so could absolutely be described – though i detest the term with a passion – as immersive. Brunvoll’s piece, Songs From The Inside of Outside, was the more delicate of the two, lyrical and intricate, vague rumblings and metallic shimmer forming a context for the core of the piece, which featured a voice. Moving through the ‘park’, the piece often gave the illusion that speakers were responding to one’s presence, enhancing the experience further, as did the work’s circular quality, its sounds and ideas seemingly wrapping around either as before or changed (or seemingly changed). Saario’s Above the Blackened Skies. Beneath the Remains was more generalised, textural and drifting in a way that discouraged moving around; before long we had all found a position where we remained, absorbed in its slow evolutions. The Speaker Park was an ear-opening experience that went a long way to confirming my long-held feeling (reinforced further by last November’s Sound-Image conference in Greenwich) that there’s something more than a little misguided about putting ever more quantities of energy, money and faith into ever more large-scale, elaborate and expensive multi-channel speaker systems. This was so much more deeply engaging. 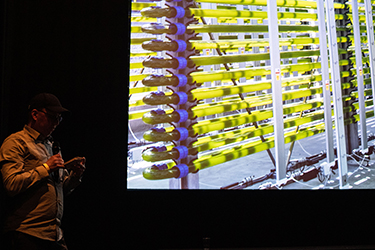 Sound of a more tangible nature was heard on Sunday morning at the impressively-named Reality-based Audio Workshop. Presented in one of Bergen’s cinemas, this was the result of a collection of sound artists who had spent time at the industrial refinery Mongstad, where carbon dioxide is captured and researched (though not, as yet, stored). On the one hand, there was a deeper motivation at work in this project, seeking to assert – in contrast to such diabolical concepts as ‘post truth’ and ‘fake news’ – the importance and authenticity of recordings grounded in reality, and which can in turn perhaps explore the differences and form connections between truth and fiction. This liminality between source and art is the essence of what has always driven and continues to drive acousmatic music. It’s not about the veracity of those sources, though: sound-objects (in the Schaefferian sense) don’t merely record a source but allude, evoke, interpret, complement or even ignore that source. The 60-minute piece we heard was certainly tilted more towards reality than art, though while it felt distinct from acousmatic conventions it would be pushing it to regard it as simply a form of ‘creative reportage’ (hmm, a new euphemism for ‘fake news’?). The sounds of the Mongstad plant fell broadly into four categories: machine-generated pitch; noise of assorted bands, colourations and kinds; voices talking; and underwater sounds, which rather wonderfully stemmed from ponds containing CO2-munching algae. All of these formed the basis for a collage that, at its best, abstracted the tangibility of its sounds such that they became more alien, and it became impossible to disentangle where one element ended and another began. Juxtaposed beside noise, the voices (helped by the musicality of the Norwegian language) fascinatingly started to sound like elaborate melodies; later on in the piece, drones and buzzes generated by industrial machines evoked some of the earlier work of the Radiophonic Workshop. The piece didn’t really justify its hour duration, but it was really good (perhaps even a corrective) to experience sound art that made the evidence and details of its sources such a high priority. 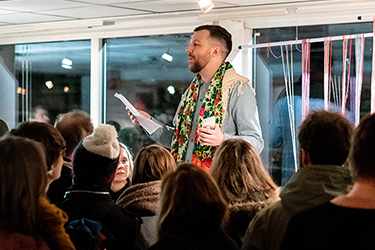 Borealis 2019 was an outstanding festival in many ways, but one of the things that really set it apart from the usual festival experience was how personal it felt. This was in part due to the intimacy of many of the performance spaces, and the lack of any meaningful sense of us and them separating artists and audiences, with warm and excitable conversations surrounding each event. But it’s worth singling out Borealis’ artistic director Peter Meanwell, who wasn’t merely present throughout but warmly welcomed the audience to each and every performance. All artistic directors care about their festivals and their audiences, of course, but i’m not sure i’ve seen that care articulated with such personality and passion as it was here.

Perhaps as an indication of the warmth being shared during Borealis, the festival ended with the first performance of a work titled ♥ LOVE. A collaboration between The Icelandic Love Corporation, composer Juliana Hodkinson and assorted members of Ensemble Adapter, the piece took place in Bergen’s International Cultural Centre, within which the atmosphere was fragrant, sensual, opulent and increasingly expectant. 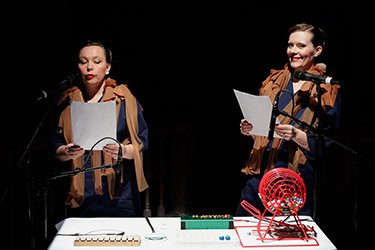 We had each been given a number on entering, and as we all reclined on plush cushions on the floor, numbers were called, bingo style, from the front; those lucky enough to be called were escorted away from the space for a more private performance. Ensemble Adapter – dispersed and hidden within these unseen nooks and crannies – created an all-encompassing sound environment that, despite the ebb and flow of the number-calling – and the possible frustration for those waiting to be called – maintained a heightened atmosphere, their abstract soundscape filled with sounds that felt intimately tactile, while rather kitsch and gaudy projections covered the walls and ceiling. The way the piece played with our engagement was fascinating, particularly the tension it caused between our hopes and expectations (“will my number be next”?) and our imagination, not being able to see the instrumentalists nor what was going on when those called went off to be with them.

Above all, though, it played with our understanding of what on earth the piece actually was. Which brings me back to my opening remarks about Borealis 2019, and its primary role as a vehicle for “eksperimentall musikk”. Was ♥ LOVE a composition? A live installation? Performance art? Was it even music? It was and it wasn’t all of these things, and a little over a week since the festival concluded i’m still marvelling at the ways Borealis challenged our definitions of and understanding about how music can be harnessed for the most radically imaginative and personally affecting creative ends.