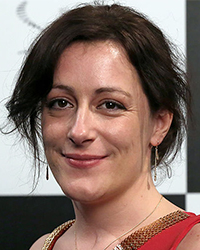 All flesh is like grass
and all its glory like the flower of grass.
The grass withers,
and the flower falls…

Words from the biblical book of 1 Peter, set to music in Brahms’ German Requiem and thereby alluded to in the title of Hungarian composer Judit Varga‘s orchestral work …alles Fleisch…. Composed in 2013, the piece commemorates flautist Zoltán Gyöngyössy, who died two years earlier. In her programme note (see below), Varga describes the piece as a requiem, though the soundworld is quite far removed from the kind of connotations that that word might immediately suggest. Certainly, considering the meaning of the word ‘requiem’, there’s very little rest in the piece. Or, rather, what traces of rest there are are militated against by a continual strain of tense, fidgety restlessness. Sometimes these two elements seem superimposed, as if they were parallel but disconnected from each other, while elsewhere they seem to be permeating each other in a complex, discomfiting amalgam of mood.

Another way of putting this is to say that the music seems to have two fundamental impulses. One is triadic, a desire to articulate itself softly via chord progressions in a state of semi-suspension. Music that floats and drifts into eternity. This is how the piece begins, its first chord slowly materialising one note at a time. The other impulse is the opposite, inclined to dynamic swells and percussive impacts. Music that is short-lived and transient, all about the moment in which it happens. Both as individual accents and textural accumulations this can be heard peppering the harmonic underlay established at the start, causing accelerating rhythmic chugging, loud taps and bangs, and leading to a slip-sliding smudging of the pitches in the chords.

It’s a decidedly odd atmosphere, caught between rest and disquiet, quite unlike the more hackneyed kind of conflict of elements one encounters in much orchestral music. The way these opposites impinge on each other, and manifest within each other, is fascinating – and, arguably, the entire point of the piece: sharp impacts become beautiful tinkling notes on metallic percussion, and the broken-up fragments of material become ever more distant, to the point that the music appears to be playing out in the middleground, as if we were listening to it from some distance away.

Structurally, Varga has used a concertina approach, bringing back the opening five-minute section twice more, each time more compressed and varied than previously. The second iteration (beginning a little over five minutes in) is much more muddied, in terms of both harmony and detail, both of which are undermined by a tendency to slide around. Its conclusion is remarkable, a sequence of weak chords as if pressed from an asthmatic squeezebox. The third iteration (starting 10 minutes in) goes the other way, a little explosion leading to climactic pounding, but in barely two minutes has blown itself out. What follows is an amazing, drawn-out coda consisting of almost nothing: halting string chords, sufficiently high and faint as to be indistinct, the merest whiff of music keeping the piece going. Low growls and an infinitely rising harp join in at the last, ascending to a delicate, slightly off-balance conclusion, giving off just a faint glow of radiance.

My piece …alles Fleisch… was composed in 2012 on the request of the Philharmonic Orchestra of Budapest. Its first performance was on 10 October 2012 at the Italian Cultural Institute in Budapest, by MÀV Symphony Orchestra conducted by László Tihanyi. The piece is a requiem, and commemorates the flute artist Zoltán Gyöngyössy [who] tragically died in [a] car accident.

The piece is practically a huge spiral representing the periodicity of life, its continuous repetition, and within itself symbolises its own self return. We hear the same musical material and dramaturgy process over and over again, but never in the same way. Time is getting shorter during repetitions, the substance thickens. While the first period lasts 5 minutes, its second appearance is only three minutes, and the third repeat is again shortened and takes only a minute and a half. Finally, the music process is compressed so much that is merely the essence, so by just a few beats It is possible to play a chordal construction from the soft scratch that comes back to the same nothing at the end of the arc.

In this structure there is as much a schenkeri[an] way of thinking as in the humans there is the relative time perception. While teenage years appear to be eventful and infinitely long, an ageing man in vain “fulfils” the same in one year, yet he feels the time is running. But in this monumental variation series not only the thickening can be observed, but also the enrichment: a new, complex music layer appears as a contrast to the basic idea, but in the meantime it again and again falls to nothing by the end of the period. The more advanced the piece is, the more extensive and more complex musical layer is built up in a given section, the stronger the breakdown is – in both dramaturgy and sound moods. The round and soft tune of the tutti orchestral sound is increasingly broken by noise, rattles: col legnos, scratched sul ponticellos, dissected piano repetitions, tremolos, and totally devastating tonality and intonation stringed glissando-s.

Passing away is an integral part of life as indicated by the title and motto of the piece: “alles Fleisch ist wie Gras und alle Herrlichkeit Der Menschen wie des Grases Blume. Das Gras ist verdorrt und die Blume abgefallen” (Brahms’ Requiem item 2, Letter of Apostle Peter 1:24). The music process is self-directed and practically writes itself: it is unstoppably and organically rushing toward its end, where the basic idea, the first 5 minute period shrinks to the smallest yet noticeable music unit, and then disappears in nowhere. This ending is predestined by the first sound of the piece, just as birth predestines the death.

Now, however, this will not be the conclusion of the piece, but after a quotation borrowed from the aforementioned Brahms’ Requiem, I’ll cut the spiral with a sharp impulse. This moment can be considered an analogy to a car accident, since the event is going to be very clear with movie-like sounds. But we can consider this a necessity, because such a heaped up and massively progressing mass can only be stopped by another mighty force.

The epilogue symbolises the shortage: the chamber ensemble is as quiet as much as playing. Here the music is happening practically amongst the sounds, in pauses. Instrumentation is also programmed: the flutes are naturally missing, on the other hand the metallic strings and the airy high clarinets play an absolute typical flute choral texture.The scale of the solo harp steadily moves upwards, but sometimes it turns back to itself, so it seems practically timeless, endless.

The solution (and ultimately almost absolution) is given by the Bach chorale quotation, which seems a new substance and alien only at the first glance it. But as we listen to the heavy Baroque quarters, the retrospective experience becomes clearer, this Bach quotation was present from the very beginning of the piece, and was heard already in countless transformations, since these chords have marked the formal boundaries, and always stitched the music itself. As an atheist this is the way I imagine the power that accompanies the life of a believer.