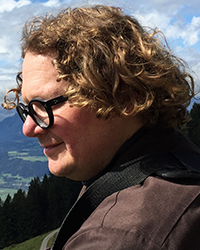 What happens in a composition, both in terms of moment-by-moment activity as well as long-term direction, can sound highly organised and micro-managed or spontaneous and accidental (not necessarily reflecting the way in which they were composed, of course). More interesting is when a piece blurs that distinction and sounds like a complex mixture of the two, as is the case in Canadian composer Marc Sabat‘s 2018 orchestral work The Luminiferous Aether. The work’s title comes from the mysterious material once postulated to exist throughout the universe, comprised of a substance that would act as the medium for carrying light (luminiferous) while, miraculously, having no effect at all on any of the bodies moving through space. The aether was disproven conclusively in the late 1880s and subsequently consigned to history with Einstein’s theory of relativity. Yet the historical conception of the aether – of something manifesting everywhere yet being neither understandable, explainable nor detectable – is one of the driving forces behind Sabat’s piece.

As i’ve already indicated, there’s a clear sense pervading The Luminiferous Aether that order and chance are equally likely to be the cause of what happens in the music. It’s not difficult to hear the work as akin to a journey through space, randomly encountering varying quantities of density and void, disarray and alignment. As such, it brings to mind Poul Anderson’s 1970 hard sci-fi novel Tau Zero, where a damaged spacecraft – stuck in the unfortunate position of being in an unstoppable state of permanent acceleration – passes through huge intergalactic distances in relatively short periods of time, arbitrarily encountering regions of emptiness, matter, pattern and noise. Quite apart from its resemblance to what happens in The Luminiferous Aether, what i also like about that analogy – though i’m not for one moment implying the music has any connection at all to the novel – is that it introduces a cosmological aspect that might not suggest itself when listening to the piece, that of vast distances and speed manifesting in apparently slow rates of movement and change. It’s a valuable paradox to hold in mind.

The essence of the work’s ostensible liminality between carefulness and caprice, and of its fundamental gradual state of flux, is in its harmony. All the way through one is forced to reappraise the nature of the music’s harmonic language. The opening few minutes act as a paradigm for the whole piece, seemingly reinforcing various fundamental pitches as potential ‘tonics’, while at the same time giving the indication of not only chord progressions but even moments one might plausibly call ‘cadential’. There is in these opening minutes an almost overwhelming impression that the music is proceeding with such care of note and chord placement, and the juxtaposition of its passing ideas, that it couldn’t be arbitrary or unplanned, and must be more than simply sounds coalescing. Yet militating against this is the ambiguity of the harmony and the questionable character and even existence of these supposed ‘chords’ and their putative ‘progressions’ and ‘cadences’. It might all just be imaginary.

Sabat adds to this ambiguity by making extensive use of just intonation. There are plenty of times when the brain simply ‘retunes’ these microtonal pitches automatically and minimises their impact, but elsewhere their effect on the work’s harmonic palette is enormous. Pitch no longer feels connected to rung-like degrees of semitonal arrangement but float between or buzz against them. In one lovely moment, as if the sun were suddenly shining on the orchestra, a rising harmonic series appears, its purity swiftly followed by siren-like undulations and quizzical drones that render it moot. And as i already said, The Luminiferous Aether is just as structurally enigmatic as it is harmonically, sometimes opening out into episodes of near total inactivity, elsewhere passing through deep oscillating ripples as if bobbing on gravitational waves. In the long-term the dramatic effect is similarly cryptic: small-scale climaxes appear from nowhere; passages possibly building towards something end up doing nothing of the kind. What’s deliberate and what’s not? What’s real and what’s not?

Ultimately, what this engenders from a listening perspective is an equally liminal state of rest and unrest. One might almost call this polarisation ‘ambient’, pulling continuously between passages of (to borrow Brian Eno’s terms) ‘ignorable’ and ‘interesting’ material. There’s certainly no linear narrative to the piece, and more than a slight sense of circularity, of music occupying a steady state – like the aether, another disproved astronomical concept – that could conceivably play out like this forever. Furthermore, every single time i’ve listened to it, the piece never sounds the same – indeed, sometimes, it sounds almost entirely different. It’s a fascinating and beautiful essay in questioning, even confounding states of musical ambiguity.

The Luminiferous Aether is harmonic space music, drawing inspiration from the gradual unfolding of tonal interactions and connections which characterises the Dhrupad style of North Indian Hindustani music. The underlying principle of a consonant tanpura drone, commonly sa and pa, is projected here into a spine of perfect untempered fifths extending from the Violins’ open E string downward though the open strings of Violas and retuned Violoncelli in an unbroken chain to the F and Bb of the open brass. Within each of these perfect fifths, the instruments are exploring gradual movements upward in small melodic steps,embedded in simple phrases and counterpoints. The music successively reveals shadings and harmonies based on the untempered intervals of the 7th, 11th, 13th and finally 5th natural harmonics from the various open string fundamentals. Over the course of the approximately 18 minute composition, these small “microtonal” steps gradually approach the simplest melodic counterpoint: passing from a perfect fifth to a perfect fourth by the interval of a tone.The title refers to an imaginary medium,postulated in 19th century physics, which was believed to permeate the universe,thus allowing the transmission of electromagnetic vibrations.It is also reminiscent of the unheard primordial vibration of all things described in Indian conceptions of sound: nada, that which reveals and is revealed by time.

This Nørgård fan found much to enjoy in this piece…although, of course, Sabat is nobody but himself.

Thank you for this poetic and inspiring review of a piece that grew over a long time in equal measure structured and intuitive. We composers work months alone lost in our imagination and nothing is more touching than hearing of another’s experience and response to the music.