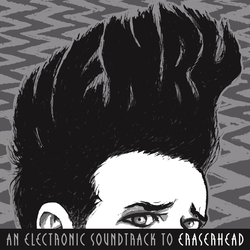 The word ‘sacrilege’ doesn’t hold a lot of meaning for me, yet it was this very word that popped into my mind when i was contacted a couple of months ago by Boston musician Mike Langlie, a.k.a. Cat Temper, to let me know of his latest project Henry, being a new soundtrack for David Lynch’s 1977 debut movie Eraserhead. Longer-term readers of 5:4 will know that when i’m not composing, critiquing or listening to music, i’m usually to be found watching movies. Cinema is a life-long passion of mine, and David Lynch was one of the very first directors whose work i fell in love with during my early, highly impressionable teenage years. Eraserhead was, and remains, an astonishing achievement – a complex, immersive, disorienting dive into a surreal world that may or may not be part of our own, or indeed happening all or in part within the fevered imagination of its protagonist Henry Spencer. Furthermore, as with all of Lynch’s projects, the music and sound design – becoming one and the same thing, impossible to separate – are an integral component in Eraserhead‘s cinematic language. Put simply: you don’t fuck around with it; to do so would surely be sacrilege.

Yet, sitting down to watch Eraserhead a couple of weeks ago – sound muted, now synchronised with Cat Temper’s new score – i can happily admit to having goosebumps from the outset. This was a double-bill, in fact: i watched the film in its original form first, in order to re-imprint its sound-image relationship and thereby be better placed to appreciate the effect of Temper’s music. The first thing to say is that Henry never overtly seeks to emulate the film’s original soundworld: in place of Lynch’s industrial mise en scène we are presented with an intense, brooding, synth-laden score filled with restless riffs and pulsating rhythms – David Lynch as if reconfigured by Nicolas Winding Refn. Quite apart from its potential effectiveness, opting to take such an entirely different, even opposite musical approach as this has got to be applauded: whatever else it may be, it’s bold, it’s brave and it’s ballsy.

And as i said, from the start of the film’s prologue, soaring over the surface of an ominous planet, it had already won me over. The nervous energy in its bristling rhythms and basslines seemed to herald the start of a kind of synth-rock opera, and evidently a deeply unsettling one. As the next few scenes unfold, there are times when Temper does move slightly closer to the original, though his use of industrial clangs and stings, acting to punctuate periods of hovering atmosphere, feel like preparatory impacts that later become formalised in rhythmic patterns. This use of rhythm as the basis for a score is interesting: at one early point i was considering the way the music seemed to be ‘treading water’ (as so much film music tends – and needs – to do), or whether it only appeared to be doing this because it was rhythmic. Temper’s pulsing arrangements tend to occupy each scene for most of the time – there’s not a lot of silence – but this is also the case with the original, Lynch filling the film with an abstract sound design that one would never describe as ‘treading water’, and which feels oppressive precisely because of its omnipresence. The rhythmic nature of Temper’s cues underlines their capacity to mark time passing, but maybe their circling patterns are just as much creating and maintaining an omnipresent atmosphere as the original.

There’s something else to say about this. The extent to which the original soundtrack appears to be diegetic is ambiguous: is the sound we’re hearing actually present in what we’re seeing on screen, or is it part of Spencer’s convoluted psychology? The same is true of Henry: beyond the simple progression from scene to scene, there are plenty of times when Temper’s score synchronises perfectly with events in the film – the first close-up of the planet; when Spencer puts a record on; the appearance of a cuckoo clock; and so on – that imply a direct connection to the film’s narrative, yet its pervading presence suggests it’s more than that, something ‘outside’, non-diegetically imposed onto this strange world.

There’s more to the tone of Henry than just driving riffs and rhythms, though. Temper plays up the absurdity and grotesqueness of the film’s imagery in various ways. Deep, glowering chords to accompany the awkward confrontation between Spencer and the mother of his girlfriend, Mary; weird off-kilter lullabies during appearances of the baby; evocations of swing music for the Lady in the Radiator, replete with wobbly stings for the sperm-like creatures around her feet; and for those who can’t contemplate Eraserhead without its iconic song ‘In Heaven‘, Temper has created a new rendition of it that suits the tone of the rest of his score, the one example in Henry where he directly alludes to the original soundtrack.

Yet while there are occasions when the persistence of beats feels a touch out-of-place – continuing more for musical than narrative reasons – for the most part it’s impressive in the way they transform, enhance or otherwise recolour the nature of certain scenes. Spencer’s meeting with the Beautiful Girl becomes a darkly threatening yet erotically-charged confrontation in Temper’s seductive, pounding electronica (hints here of NIN); the pencil-making machine feels like an unstoppable factory production line; and the rapid jump-cut edits that follow in the wake of Spencer’s cutting opening the baby’s swaddling bandages are wonderfully matched with abrupt, punchy beats and basslines.

In its heavy use of synths Temper’s score has a roaming retro vibe to it, often evoking the 1980s, sometimes the earlier 1990s, but there’s no real sense of pastiche running through the music. i’ve no idea what the rest of Temper’s music is like (this is my first contact with his work), but insofar as ideas like this are inevitably in part derivative of existing works of electronica, industrial / electronic rock and dark ambient, as a whole it nonetheless sounds authentic and personal.

Most of all, though – and this is what matters most – it’s pretty convincing. What i realised, around a quarter of an hour into the film, is that the experience of watching Eraserhead with Cat Temper’s score is very much like watching a movie from the silent film era. This experience was no doubt bolstered due to the film being in black and white, but in the same way that one merges the otherwise obviously disconnected entities of image and sound when watching a silent movie, this happened for me when bringing together Lynch’s Eraserhead with Temper’s Henry. Regarded in this way, the only thing missing were intertitles for the dialogue – but i watched the film with subtitles switched on, which did the job nicely.

There will, no doubt, be Lynch purists and obsessives for whom even the notion of replacing Lynch’s original sound design would be unthinkably sacrilegious. For everyone else, i’d recommend giving it a shot. Not only has it widened my appreciation of the original movie, it’s got me thinking again about the relationship between films and their scores and the extent to which soundtracks should be regarded as definitive or potentially replaceable components in a cinematic narrative.

Henry (an electronic soundtrack to Eraserhead) is available as a digital download from Cat Temper’s Bandcamp site, and comes with clear instructions on how to synchronise the music with the film.

Hmmm…I may listen to this out of sheer curiosity, but I’m not sure I’m in a hurry to couple it to the film. As a (by the sound of things) equally impressionable 20-year-old undergrad watching it during the long summer break (with – accordingly, and perhaps tellingly – little else to occupy my mind), I was more freaked out by it than I have been by anything before or since (I remember having difficulty sleeping for about a week afterwards). While there’s Lynch with which I’ve either happily re-bamboozled myself, or can imagine myself doing so (Blue Velvet, Wild at Heart, Mulholland Drive – hell, even Dune), Eraserhead has never tempted me back during the succeeding 20-plus years.

I agree that Eraserhead is a much more disquieting experience than those films you mentioned (but, i would say, on a par with both Lost Highway and INLAND EMPIRE, both remarkable films), i do think you’ll find the experience radically shifted with the Cat Temper score. My advice would be precisely not to listen to it first, so that the way it works with the movie won’t be pre-empted in any way. Try it!