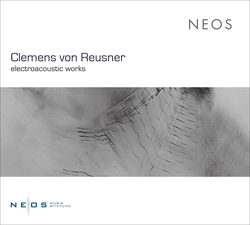 In contemporary electronic music it can be hard to find a good balance between a robust sense of purpose while retaining the possibility of spontaneity. To an extent, the sculpted nature of fixed media works tacitly tends to enforce the former over the latter such that, like the dialogue in most movies, everything we hear is not merely interesting or relevant in the moment but necessary to the larger-scale direction of the work’s inner narrative. With that in mind, it’s been good to spend time with an anthology of electronic music by German composer Clemens von Reusner, where precisely this kind of balance between order and whim is demonstrated.

Aside from the fact they were all composed within the last decade, if the seven works on the disc have something fundamental in common it’s to be found in Reusner’s general attitude with regard to the handling of his materials. The title of one of the pieces, Sphären der Untätigkeit (‘Spheres of Inactivity’), might do well as a description of this attitude. At pretty much no point is there a sense that Reusner is pushing things on or overtly marshalling them toward a certain end or outcome. Instead, sounds – both on their own and as part of larger textures – are given time to establish themselves, allowing us to get to know them, before they change and/or develop into something new. What that means is that the impression of structure in these pieces is just that, an impression, one that ostensibly arises more from the inclination and interaction of each work’s elements than from an underlying scheme within which they are designed to conform and fit.

Various implications arise from this, the most obvious being that listener expectations serve little purpose, not only with regard to the unpredictability of the music, but also to the laid-back sense of momentum that these pieces exhibit. Put crudely, not only do we not know where we’re going, we don’t know why it seems to be taking so long to get there, but for the most part this turns out to be absolutely no bad thing. Anamorphosis, the work that opens the disc, is a case in point. Reusner sets up a creaking textural jitter that sounds as if it has significant potential energy. Yet this is matched by a tangential element that drapes long sustained pitches, varying in their quantities of inner noise, across the space. Neither predominates, and indeed it’s questionable to what extent they interact and interrupt each other or simply take turns to speak. There’s a nonchalance to its drama, and while in certain contexts that could easily push listeners away, here it’s surprisingly compelling, drawing one into its inscrutable habitat. KRIT acts in a similar way, juxtaposing soft, shimmering tones and gentle ripples amidst loud burble and noise. It’s easier here to interpret a subsequent taking over of the noise as having the effect of wiping out everything else, yet the way those ripples return and establish a wide, fluttering environment, plus the work’s development into a a dense, stratified object where heft and lightness coexist, question such quick conclusions. The same applies to Topos Concrete, where even more polar opposite elements are thrown together but, again, don’t so much fight to prevail as capriciously dance in and out of the spotlight.

This kind of relationship is more playful in HO, a work created using Csound. Focusing on the interplay of heavily foregrounded pitches and fluttering granular elements – all floating in a vast reverb chamber – there’s a highly effective mix of suspension and movement, as well as clarity and blurring. Dominated by periods of drawn-out pitch with minimal interaction, the drifting nature of the elements in HO rather nicely makes it a work apparently with no real beginning or end but which acts more simply as a window into a strange and beautiful (and very much larger) world. Something of a behavioural opposite, Definierte Lastbedingung (‘Defined Load Condition’) demonstrates how dramatic can be the consequences of allowing structure to unfold in such an off-hand way. Though its progression through deep drones, weighty layers of dripping granules, quasi-mechanical clatter and bursts of rushing pitches, sounds organic and evolutionary, every time i listen to the piece i find myself repeatedly wondering exactly how we got here. Considering the sedate pace of the music, there are times when its development can feel bewilderingly rapid. Like HO, the aforementioned Sphären der Untätigkeit is primarily concerned with pitch, heard individually and in crude clusters and agglomerations. This is Reusner at his most ‘ambient’, sufficiently improvised in nature that the word ‘structure’ practically loses all meaning. Similarly, cause and effect have no place here either, replaced by a fascinating and often extremely beautiful interplay of sound objects that may or may not be doing anything at all, or simply subject to the vicissitudes of virtual light playing across their surfaces.

It could be argued that in some cases, including KRIT and most notably in Dry Friction (the most conventional piece on the disc, somewhat at odds with the rest), Reusner allows himself too much nonchalance, and that the unpredictability of these sonic journeys – though, as i’ve said, one of their most striking aspects – leads to the appearance of longueurs. They’re as much a product of the disorientation of the narrative, but that doesn’t make them any less apparent. That being said, though, they by no means dominate Reusner’s musical language as demonstrated here; what emerges most forcefully is the delicately nuanced and fluid way that Reusner creates his compositions – without, it’s tempting to believe, getting personally involved at all.

Electroacoustic Works is released on the NEOS label, and is available on CD and download.