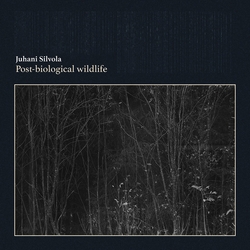 We might call it “conjectural anthropology”. What i’m referring to here is music (or any art, for that matter) that seeks to fabricate and/or otherwise be inspired by fictitious notions of organic life and activity. We find examples of this in, among other places, the strange electronic languages being uttered in the two volumes of Rashad Becker’s Traditional Music of Notional Species, in the wildly theatrical simulated-ethnographic rituals and dances of Paul Dolden’s Histoires d’histoire, and in the dual attempt to question and (re)invent an ancient magic in Gabriel Dharmoo’s Futile Spells. While none of these works seeks to effect real plausibility – focusing instead on the inherent joy arising from playing fast and loose with conceits of pseudo-reality – it’s surprising how effective and authentic they can feel, and as a consequence, how much we want them to be real. Similar feelings arise when listening to Post-biological wildlife, the latest album from Norwegian composer Juhani Silvola.

Rather than conceptualising a long-distant past, Silvola’s outlook is staunchly forward, looking ahead to a futuristic vision that may or may not involve people. Or, at least, ‘people’ as we currently understand the term: the “post-biology” at play here is evidently a convoluted amalgam of human, animal and machine elements. Opening track ‘Ritualrytmikk’ (itself a lexicological amalgam) brings together an assortment of percussive taps and beats amidst electronic blips and bleeps such that the distinction between them, though always evident, seems irrelevant. Occasionally surrounded by deep gongs and high chimes, the ritual aspect of the music is articulated with ice-cold simplicity and clarity, forming a nice counterpoint to the capricious irregularity of its rhythmic patterns. More relaxed but connected in parallel, ’20th Century Meditation’ turns metric regularity into a steady state textural foundation over which gentle plinky-plonky melodic fragments meander. As such, it evokes the progenitors of ambient music (hinted at in both parts of its title, “20th Century” and “Meditation”) while sounding unequivocally new. The title track is equally committed to just a single idea, setting up a habitat within which ersatz bird- and insect-sounds proliferate, joined later by gusts generated by an artificial storm.

Aside from this track, the rest of the album, despite its overall name, generally resists such direct invocations of organic life in favour of soundscapes indicative or descriptive of how such life might be enacted, or the nature of the environment they inhabit. Two tracks, ‘Speculative Phonography, pt. 1’ and ‘Vaster Than Empires’, do this from opposite directions. The former is something akin to a counterfeit field recording, not simply because of the nature of its sound elements – including wind, rain and water, alongside less identifiable scratchings and clatter – but in the strikingly hands-off way the piece unfolds. One of the longest tracks on the album, its development is sufficiently slow that at times it’s as if one had been transported into Silvola’s imaginary world and were simply listening to events playing out naturally. It is a construct, though, a fact made most abundantly clear in a culminating sequence of pounding metric thuds, heard in bursts interspersed with some uncanny-valley renditions of birdsong. ‘Vaster Than Empires’, by contrast, rather than being a seeming by-product of this imaginary world instead steps outside it, acting like a kind of non-diegetic slice of soundtrack. It breaks away from the timbral ambiguity heard elsewhere, obviously drawing on the sounds of a Hardanger fiddle (performed by Silvola’s wife, Sarah-Jane Summers) as the basis for its music. While that makes it the most immediate of these six tracks, it’s also the most volatile, moving violently back-and-forth between low episodes of friction and violent explosions, soft creaks and juddering soundmasses.

Most direct of all in its biotech allusions is ‘Machines of Loving Grace’ (the title of which evokes both the optimism of Richard Brautigan’s original poem and the pessimism of Adam Curtis’ documentary series), where alternately growling and shrill pitches suggest a dial being wildly rotated on dated electronic equipment, in the process becoming caked in distortion. This is to an extent balanced by gentle drones and light tickling sounds – suggesting diverse forms of abstract organisms – though these are something of an interlude within glowering walls of throbbing noise, creating an interplay between regularity and uncertainty, redolent of the collision – or should that be melding? – between machine-like and organic sonic forces.

Post-biological wildlife is a beautifully strange and evocative album, often so vivid that its soundworld becomes all-immersive, like strapping on a virtual reality headset. Despite the dour presentation of the album’s artwork – draped in near-black, adorned only with a night photo looking towards thin trees – there’s little about it that seems overtly dystopian. Juhani Silvola’s futuristic vision is full of clunk and crunch, squawk and squall, but ultimately conveys a mix of equally frail analogue tech and organic entities existing in an intimate symbiosis.

Released earlier this year on Silvola’s own Eighth Nerve Audio label, Post-biological wildlife is available on CD and download.