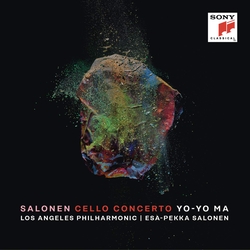 One of my highlights from last year came at the end of the summer, during the final concert at the Baltic Sea Festival in Stockholm. An occasion given over to celebrating composer and conductor Esa-Pekka Salonen (which i reviewed elsewhere), the concert included a performance of Salonen’s Cello Concerto given by soloist Truls Mørk and the Swedish Radio Symphony Orchestra, conducted by – who else? – the composer himself. Originally premièred in early 2017, i didn’t know the piece beforehand but came away enormously impressed at its language and attitude. So, while it’s often true that new works can take an irritatingly long time before becoming available, it’s great to see a CD of this piece has been released, performed by the work’s dedicatee, Yo-Yo Ma, with Salonen conducting the Los Angeles Philharmonic.

Having the opportunity to spending time with the piece again, at length, has clarified things enormously. The first and most important thing to say is that it’s just as deeply impressive on repeat listening as it was on first contact in the Berwaldhallen last September. Salonen writes in the accompanying notes about not being bothered about tradition, and that “a concerto does not suggest a formal design the same way a symphony does”. At first glance, that seems an odd assertion to make considering his own concerto is structured in three movements that broadly conform to the convention of fast-slow-fast. Yet that’s about as conventional as the work gets, and it’s more accurate to characterise the content of those movements as the product of improvisatory whim and élan. As such, structure comes across more like an ’emergent property’ than a clear, prefabricated design underlying things, and even that fast-slow-fast description, when immersed within the piece, seems to be of secondary importance at best.

A great deal of the first two movements occupies a kind of dreamscape, with all the connotations of confusion and unpredictability that that suggests. In the first movement (which Salonen, in his sketches, titled “Chaos to line”), this manifests primarily through a push-pull interaction between forward movement and suspension, with soloist and orchestra alike frequently seeming compelled simply to pause and marvel at their own fantastical textures. This creates a highly effective form of tension with the presence of line running through the work: while melody is clearly important, it’s not all-important, at least not in the way it tends to be in more traditional concertos. Salonen’s cello is one happily prepared to fall silent; to let notes, chords and textures play out and resonate; to take time in its impulse to move along. That being said, there’s a clear-cut relationship at work, the orchestra operating primarily to support and surround the cello at its centre. Yet they exercise that support with considerable autonomy: it’s the orchestra that instigates the work’s rich, even opulent harmonic and timbral palette, thereby providing the colour to the cello’s intricate but monochrome line. In tandem with this, they suggest putative ‘cadences’, moments that don’t so much structure the piece as add pivot points about which it can flex. And just like the cello, the orchestra also isn’t afraid of pulling back to pretty much nothing, at times providing so little accompaniment you’d be forgiven for thinking they’d vanished.

But it would be wrong to characterise the relationship between soloist and orchestra in Salonen’s concerto as hierarchical. The emphasis is more on respective responsibilities, and within that, it’s a very real dialogue, and a flexible one at that. In both of the first two movements there’s an increasing quantity of counterpoint, the woodwinds in particular taking the most assertive turns to engage in one-to-ones with the cellist. In the second movement, there’s a vague echo of Messiaen in the way these contrapuntal episodes occupy its sedate sleepiness, like birds engaging in drowsy discourse. At its dramatic apex, Salonen even goes so far as to construct a tapestry of quasi-bird calls from falling glissandi, that subsequently evolve into an ethereal canopy to the movement’s vague but emotionally impactful closing melody, another lengthy sequence where the cellist sits in silence.

While there are numerous instances of radiant stasis in the first and second movements, Salonen turns over the third to energy and momentum. There are times when it evokes the kind of ritualised dance of Stravinsky’s Rite, though the overall emphasis is on a more generalised fun and liveliness, the concerto essentially coming out of the other side from the profundity and ecstasy of earlier. At 13 minutes, this final movement is the only one that sounds a touch over-long, the cello taking the lead and guiding the members of the orchestra through more and more episodes of diverse merriment, each one characterised by a different form of percussion accompaniment. There are therefore occasions where the spontaneity of the preceding movements becomes more of a liability, the movement starting to tread water in a way that suggest a paucity of ideas rather than a surfeit. However, at the same time this sense is all but dismissed as churlish due to the hugely enjoyable and amusing nature of the music, often evoking the ebullient, syncopated convolutions of Walton. Ultimately, it’s in keeping with all that went before, Salonen directing its unpredictable caprice into a party atmosphere, but its stratospheric closing moments hint that the earlier tone of reflection remains an integral part of its music.

Salonen’s Cello Concerto is a really marvellous addition to the repertoire, throwing clarity and uncertainty together in such a way that it reinvents the concerto’s classical identity. Beyond that, though, the opening two movements are surely among the most beautiful, sumptuous music for cello and orchestra ever written.

The 35-minute album is released by Sony Classical and is available on CD and download.