Composers generally tend to shy away from admitting their music to be overtly autobiographical, but in the case of the latest Proms première, by Finnish composer Outi Tarkiainen, the piece is a clear extension – a manifestation, even – of the composer’s way of experiencing the world. In her answers to my pre-première questions, Tarkiainen wrote of her synaesthetic response to harmony, perceiving it as “various colour-shades of light, and my compositions make extensive use of modality, of ‘scales of light’, as it were.” This perception in turn feeds into a larger inspiration drawing on her experiences of arctic light, which is “rich in hues and varies steeply from one season to another”. Her new work, Midnight Sun Variations, can therefore be regarded as something of a double portrait, capturing an aspect of the natural world, and of herself: “In this work I am very openly what I am.” 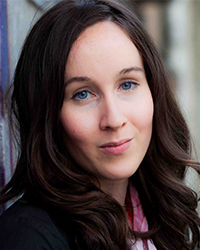 Synaesthetic responses suggest a kind of restlessness, of colours continuously dancing and wheeling in unbidden response to external stimuli. Furthermore, light (like everything in nature) never stays still, but is constantly changing and evolving. This is at the heart of Midnight Sun Variations, and is in fact what Tarkiainen is getting at in the final word of that title. The piece is not so much about (in the conventional musical sense) variations as much as variegation: music always shifting and changing, varying its emphasis, its hue, its quantities of brightness and shadow, of clarity and obfuscation.

This happens on both the work’s micro- and macrostructural levels. On the small scale, Tarkiainen sets up a glistening environment that’s all flux: spanning considerable height and depth, gestural ideas rising and falling in spirals and torrents, a small melodic kernel twisting round on itself. One detects abstract bird calls within this habitat, even the makings of a hypothetical dawn chorus in these opening minutes. Though always on the move, the palette is limited; these ideas recur and rebound off each other, in the process becoming familiar. Tarkiainen plays with notions of temperature too, tilting away from the relative coolness of this prologue into a much warmer episode couched in brass chords and the start of a strange kind of chugging repetition that will become one of the work’s main recurring ideas.

It goes without saying that all of this is textural in nature: it’s not about specific details but the agglomeration of them, all jostling and intermingling. One of the most interesting, somewhat embedded but sufficiently off-kilter to stand out, are the weird, slightly microtonal chords that are integral to the repeating idea; every time they appear it’s as if the music were starting to tip over onto its side.

On the large-scale, following an unexpected climax around halfway through, the entire nature of the music also changes. From being a textural network of slithering ideas, Midnight Sun Variations becomes more obviously melodic and harmonic in emphasis. It’s a good structural point to bring about a significant behavioural change like this, though while the transition itself isn’t exactly jarring, as time goes on the change sounds increasingly strange and incongruous. Where previously we had been roaming, semi-disoriented, in light-flecked clouds of ambiguity, the piece seems increasingly to draw on filmic tropes. Initially – straight after the climax – it’s literally as if we were suddenly thrown back into an early 20th century movie, the strings evoking a kind of dated romantic scene, and later on it suggests more recent cinematic fare. Eventually, despite the presence of the repeating chord idea, it’s not even that obvious that the latter half of the work stems from the same musical language as the first. Maybe that’s all a part of the work’s inherent state of flux, but personally, each time i’ve explored the piece it seems more and more like two separate ideas welded together to form a diptych.

It’s not remotely enough to ruin the piece, but it’s sufficient to distract and detract. The first half promises an engrossing and enchanting personal response to the complex play of light, so its ultimate transformation into an all too familiar and generic soundworld is a significant disappointment.

The world première of Outi Tarkiainen’s Midnight Sun Variations was given by the BBC Philharmonic conducted by John Storgårds.