None of the premières so far at this year’s Proms has left me with a more conflicted first impression than Dieter Ammann‘s new Piano Concerto, given its first performance on Monday by Andreas Haefliger with the BBC Symphony Orchestra conducted by Sakari Oramo. The basis for that reaction is wrapped up in trying to decide whether the piece is full of contrasts or contradictions. Considering its essential behaviour, if were a 5- or even 10-minute work it would be quite easy to write it off as all – or at least predominantly – superficial froth. Yet at over 30 minutes’ duration, that’s not the case at all, it’s not a work that can be taken lightly. Yet the extent to which – and the way in which – it can be taken seriously is another quandary. One thing that’s certain, though, is the importance of its subtitle: “Gran Toccata” – any ‘toccata’ worthy of the name is going to consist of a fair amount of fleet-footed material that twists and turns in unpredictable ways. Ammann’s Piano Concerto doesn’t simply do this, it embodies this. 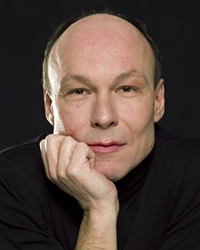 The word that’s recurred to me most when listening and re-listening to the piece is ‘obsessive’. This extends as much to the composer – who admits in his programme note to a “scrupulous, perfectionist way of working” (which accounts for the fact that the piece has taken Ammann two-and-a-half years to compose) – as to his material: art mirroring life, perhaps, or simply music made in its creator’s image. This obsessive quality manifests in two key respects, both of them underlying urges: both the ongoing sense, apparent throughout every moment of the music, that it should keep going, that there’s more left to be said, and in its restless, even irresistible, need to switch between highly contrasting modes of expression.

In terms of the “more left to be said”, what exactly the piece has to say is something else that feels conflicted. There’s more than a modest amount of noodling, particularly in the solo piano part, whose default position seems above all to be preoccupied with gesture, often flamboyantly so. A great deal of the Piano Concerto is gestural and surface-focused, yet as i’ve indicated, what this adds up to over the course of half an hour is a great deal more than that description implies. The way Ammann charges up and unleashes energy in the piece is complicated: from the outset, barely 30 seconds in, the pulse that the work’s opening accents kick-start is instantly made irregular and halting, then interrupted by a transfixed moment of ethereality. And even when it does eventually get its motor running properly, the floridity of the piano part adding to the sense it’s all gearing up for something big, the music again moves into a parallel place of ecstatic repose, before Ammann throws in a couple of sharp accents that appear at first to be blowing out the work’s fire completely, but instead switch things into a new direction.

There’s a kind of shape-shifting quality to all this, morphing from turbulence into stasis into momentum into ecstasy into cadenzas (full of faux-Romantic stylings). One could say that just as an idea is identified it’s already become something else, but i wonder whether Ammann’s concerned even with the concrete notion of an ‘idea’ – his concern seems primarily to be articulating flux, constantly transforming with barely a pause for breath. Yet such pauses are there, and they’re one of the key factors that keeps the Piano Concerto engaging, preventing it from becoming a mere exercise in perpetual change. Sometimes they’re ephemeral, as in a sequence around 10 minutes in when the piece hits a small climactic point, the piano’s repeating chords abruptly surrounded by shimmering string surges and distant wind dissonance; and another, a little under halfway through, consisting of a sort of inverted climax that’s both reduced and sustained yet which feels like a quiet apotheosis. Yet increasingly these shifts into slower, more drawn-out material – which never halt the piece but nonetheless allow it (and us) some space – gain significance, transporting the music into a place where everything floats freely, tethered only by a prominent or dronal pitch that maintains the music’s ongoing continuity.

It’s not really these passages that Ammann wants to focus on, but rather the huge quantities of energy that billow and bluster through its latter half. Yet just a few minutes before the end, the piece veers into its most mesmeric episode, tumbling into a soundworld where the piano sits in front of slowly rising, possibly microtonal strings, with occasional chimes. If ever there was a “how did we get here?” moment, it’s now, and it’s completely weird and hypnotic in equal measure. Without passages like this, i’m not sure there would be a single memorable idea in the Piano Concerto. For the most part, there isn’t – yet while it’s happening, the piece is about as exciting and engaging as anyone could hope for, which does at least make for a memorable overall experience.

i’m sure there will be those who just find it to be a bit of an indulgent and/or irritating schizoid farrago, but i’ve come to find its compulsive behaviour increasingly compelling. At first i wasn’t sure what to think about this piece; gradually i’ve found myself liking it more and more – and i can’t help feeling that, eventually, i’m going to absolutely love it.

Great review Simon – you raise plenty of interesting points here. I really enjoyed this piece, perhaps because it’s so flamboyantly OTT, but I can understand why some people might have found it irritating.
I must say I was surprised to hear what sounded like several direct quotes from Stravinsky’s Petrushka, particularly around the 25 min mark. That being said, the quotes didn’t sound forced or unnatural, and seemed to arise naturally from the musical material. Not that there’s anything wrong with quoting other composers, of course. Stravinsky himself was surely renowned for his brazen pilfering of other people’s ideas, even if he did manage to make them entirely his own. Good composers borrow, great composers steal…

During some parts of this I thought of Keith Emerson’s Piano Concerto, though I liked that piece a great deal more than this.

i keep coming back to this over and over, most days of this last week that ive been off work. his music has captivated me since his music of today portrait with philharmonia three years ago. a fascinating balance of flamboyance and delicacy. some direct quotes from earlier work (around 16′ theres an extensive reference to ‘le reseau des reprises’ which is my (possibly now second) fav piece of his.

Thank you for this thoughtful and profound review, dear Simon Cummings.
And for the attentiveness of people like Oscar Ridout (Merci!) or the secretorganist.
To starry: I don’t know the Piano Concerto of Keith Emerson (didn’t even know that there is one) but will catch up on it.

Thank you Mr. Ammann! I must say I was unfamiliar with your music, but on the strength of this concerto I’ll certainly be searching out more of your work.

Thanks for the interest in what I create.

I’ve listened to this 4 times now. Yes, I really do like this piece. I also hear something like Petrushka, in my case it seemed to surface, at about 2.30. What’s that at 2.41? -I’ve heard something like that before. Then is that Bernstein at 6 plus minutes? Ravel, Rimsky-K; at one point my wife said “oh Debussy”.This happened time and again. Now this sounds like a criticism but no, no, no. I loved it. I’m not sure how much of the music was quoting other pieces- I think it was just messing with my mind. And I’m a willing “victim”. Thank you, Mr Ammann.

@Simon Jarvis
Except a kind of texture of Petrushka, there is no quote of any other music in the Concerto.
But what I let appear in my compositions are all the unconscious resonances of music that I have heard and internalized once or several times in my life.