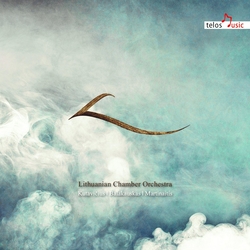 i’ve written a lot about Estonian music on 5:4 in the last few years, but i’m conscious that i’ve given relatively little attention to the other two Baltic states. That’s more to do with a lack of opportunities than a lack of enthusiasm, but while i’m still relatively clueless about contemporary music from Latvia, i wanted to flag up an interesting disc of orchestral works that i received from some very nice people in Lithuania. Recorded by the Lithuanian Chamber Orchestra, conducted by Adrija Čepaitė, the disc features pieces by a trio of senior figures in Lithuanian music.

Stylistically, the three works on the album are quite different from one other. The most mainstream of them is the Concerto for oboe, harpsichord & strings, a work from the early ’80s by Osvaldas Balakauskas. The first of its three movements (traditionally arranged fast-slow-fast) is the most engaging, perhaps because there’s something vaguely Tippett-like about its clean, bracing counterpoint. Brisk but lyrical music robustly led by the strings, the harpsichord focuses on reinforcing and punctuating the ends of their phrases, as well as providing transitions between them, while the oboe interjects here and there, occasionally moving into the spotlight. The oboe takes centre-stage proper in the slow movement, a pretty but not especially memorable idyll (most interesting in some briefly darker hues introduced from the strings), while the final movement is an exercise in rambunctious post-Romanticism that at first seems glistening in its rapid rhythmic drive but comes to feel more dull due to Balakauskas’ emphasis on gesture and momentum rather than crafting interesting details.

More involving by far is Bronius Kutavičius‘ Dzūkian Variations, which takes as its starting point – both materially and literally, being heard at the start of the piece – beauštanti aušrelė, the folksong originating in the Dzūkian region of Lithuania. It’s tempting to say that fans of Henryk Górecki’s famous Symphony No. 3 will find much to like about this piece, but it’s worth bearing in mind that the Dzūkian Variations, composed in 1974, predate that piece by several years. Kutavičius’ string textures during the earlier variations bring to mind the overlapping lines of material in the Górecki, channelled here to create a progression from delicate filigree to a sumptuous interlocking network of what is, in essence, all comprised of the same basic thing, creating a hall of mirrors effect where everything is both source and reflection simultaneously. Subsequent variations shift into quite different territory. One of them nicely reduces traces of the original folksong to little more than a tantalising vestige, barely detectable amidst shivering tremolandos, while another transforms it into a ghostly manifestation emerging from a previously unheard cimbalom, becoming a decidedly uncanny presence. Rather bravely, Kutavičius lets the music eventually peter out onto a single note, before revisiting the overlapping strings idea from earlier, now over a drone, forming an introduction to the work’s climax, where a choir performs a grand but sympathetic four-part rendition of the folksong. It’s a beautiful work that never loses sight of an underlying contemplative impulse, even during its most full-force sequences.

For me, the highlight of the disc is Algirdas Martinaitis‘ 2005 work for tenor, flute, oboe, harpsichord and strings, Musical Offering. As the title suggests, the piece emerges from material by J. S. Bach (it was composed to celebrate the 250th anniversary of Bach’s death), though its relationship with that material is difficult to describe. This is, in fact, what’s most deeply engrossing about the piece, the way that Martinaitis slips so effortlessly around a continuum the poles of which are directed entirely toward and away from Bach respectively. What this means is that, on the one hand, Musical Offering is undoubtedly an earnest homage, one that borrows a plethora of motifs, modes of behaviour, chord sequences and patterns, and orchestrational mannerisms from Bach, while on the other hand always feeling a world away from pastiche, unquestionably new in its use of (ancient and modern) musical languages. So through the course of the four movements (which i won’t even attempt to try to describe here), there’s a simultaneous sense of being rooted in Bach yet with complete freedom to meander about. Furthermore, the presence of the tenor – singing words from the book of Revelation (unfortunately not included in the CD booklet) – lends the piece something of the quality of a cantata. This is significant, as works of this ilk can come across as mere entertainment, the product of a composer mucking around with some well-established historical tropes. But the tenor part – sung absolutely exquisitely by Giovanni da Silvia – makes the piece feel lofty, even elevated. That being said, Martinaitis is clearly having a great deal of fun in his homage to Bach, in the music’s wildly rhapsodic character, in its dense passages of counterpoint, in the various cadenza sequences that are about as far removed as it’s possible to get from Bach, and most cheekily at the very end, when the final cadence gets suspended just before resolving, shifting sideways into a strange, halting epilogue. It’s all absolutely marvellous.

To what extent these three works exemplify Lithuanian 20th and 21st century music is a question i’m still a long way off from being able to answer. But this disc is nonetheless a fascinating introduction to Lithuanian orchestral music, one that’s left me wanting to hear much more. To be continued in due course. Meanwhile, this disc was released in the UK late last year on the Telos Music label, and is available from all the usual outlets on CD and digital format. More information can be found on the Music Information Centre Lithuania website.