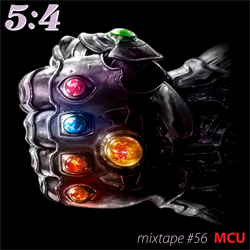 Considering that, when i’m not doing something musical, i’m most often to be found in front of a movie, it’s perhaps surprising that none of my previous mixtapes have been devoted to film scores. Until now, that is. Over the summer, the Beloved and i have been working our way through all the films in the Marvel Cinematic Universe. So the latest 5:4 mixtape is a homage to and celebration of the MCU, which for my money is one of the most ambitious, fantastical and exhilarating experiences i’ve had in my cinema-going life. For this mix i’ve allowed myself just one – or, in a couple of cases, two (because they’re really short) – track from each film, moving through them in the order they were released.

i’m conscious of the fact that it might seem a little ironic to turn to the MCU in particular for a musical celebration like this. It is ironic: while some of these movies are among my absolute favourites, very few of their scores adequately live up to the range of imagination and invention that we witness on screen. As was explored in the video ‘The Marvel Symphonic Universe‘ on the excellent, now sadly-defunct YouTube channel Every Frame A Painting a few years ago, a great deal of the music composed for the MCU is bland, generic, superfluous and completely forgettable. Indeed, each time i’ve made the transition from big screen to loudspeakers after seeing each movie for the first time it’s usually proven to be, at the very least, something of a crestfalling experience. But then, that experience is more of a Hollywood problem in general rather than being peculiar to the MCU.

Regardless of all that, i contend that, if you’re prepared to pan for sonic gold, there’s still a lot to enjoy in the music from these movies, and more than a few surprises along the way. i really like the meditative innocence of Ramin Djawadi‘s score for the original Iron Man – when none of us had any clue as to the scale of story-telling that would ensue – which John Debney would subsequently coat in nu metal hooks and riffs for the first sequel (one of the best scores of the franchise). Alan Silvestri‘s theme for The Avengers is as memorable as it is stirringly effective, setting up one of the few really telling points of musical continuity in the series. While we’re talking about themes, Christophe Beck‘s and Michael Giaccino‘s approaches to Ant-Man and Spider-Man respectively are both lovely mélanges of noir, heist and caper, while Brian Tyler‘s setting-up of Thor: The Dark World perfectly captures the film’s mix of mythology and swagger. It was brave of Mark Mothersbaugh to surround this hitherto epic character with retro synths and stylings for Thor: Ragnarok, but it’s brilliantly suited to the gaudy shift in aesthetic, not that far removed from Tyler Bates‘ awe and wonder approach to the two Guardians of the Galaxy movies, echoed by Christophe Beck in his Ant-Man and the Wasp music conjuring up the mysterious and gorgeously-rendered ‘Quantum Realm’. Though it was ludicrously over-hyped (much like the film itself), Ludwig Göransson‘s extension of the series’ soundworld to encompass African tropes in his score for Black Panther is refreshing. Most notable of all, though, is Henry Jackman‘s unique contribution to the MCU in Captain America: The Winter Soldier, channelling his inner Trent Reznor to create an unsettling score unlike any other in the series (all the more obvious in this mixtape), filled with unrelenting jabs of marvellously razor-sharp, edgy electronica. And while the accusations of a lack of memorable music have merit, there’s some potent lyrical writing to be found in the saga’s more intimate and anguished moments, particularly from Patrick Doyle in Thor and, above all, Alan Silvestri‘s moving emotional high points of tragedy and heartbreak in the colossal Avengers two-parter Infinity War and Endgame.

While technically the complete ‘Infinity Saga’ includes 23 films, for my purposes – due to its overwhelmingly cathartic point in the narrative, which makes a much more convincing point to close this first epic chapter of the MCU – i’ve made Endgame the conclusion of this mixtape. Though i’ve worked through the films in order, i haven’t sought to retain a clear sense of the saga’s ongoing narrative, nor have i necessarily selected tracks that are highly representative of their respective scores as a whole. This mix simply explores some of the most interesting musical episodes to be found in the Marvel Cinematic Universe, some of which are happily at some remove from the conventions of Hollywood histrionics.

Over 45 hours of cinematic saga distilled to just 78 minutes of musical mayhem, malevolence and magic; here’s the tracklisting in full, including time positions and links to buy the music.