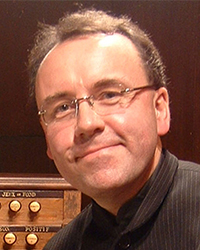 One of the minor passions of my listening life, which i rarely write about here, is organ music. It doesn’t come up very often in the world of contemporary music, but it did a couple of months back in the gala recital at this year’s OrganFest at Llandaff Cathedral. Performed by David Briggs, on the cathedral’s newly-installed instrument, the entire second half of the concert was given over to a brand new symphony completely improvised by Briggs, grandly titled Symphonie Improvisée on Three Welsh Themes. i’ve been fortunate enough to experience a number of Briggs’ live performances, and i’ve never heard any organist who has wowed me more – both his abilities at improvisation as well as his astonishingly effective transcriptions of well-known works of orchestral music (especially his Mahler symphony arrangements). The use of French in the title of this new improvised symphony connects the work to the 20th century French organ school tradition, though due to its three movement structure, and the nature of those movements, it resembles less the suite-like symphonies by the likes of Widor or Louis Vierne, being more closely-related to those of Marcel Dupré.

The three Welsh themes used as the basis for the symphony are among the most well-known tunes associated with Wales: Men of Harlech,

Ar Hyd y Nos (All Through the Night),

and Hen Wlad Fy Nhadau (Land of my Fathers – the Welsh national anthem).

All really great tunes, and in this context they’re a nicely connected and contrasting mix; some of them share certain features, such as metre and rhythm, though in terms of character they’re each very distinctive: an anthem, a march and a lullaby.

Not that any of them retains – or, at least, exclusively retains – these characteristics within Briggs’ extensive symphonic treatment of them. Though evidently created on the spur of the moment, in real time (prior to the performance Briggs remarked that the symphony was “completely made up on the spot … you create the construction about 10 seconds before you start to play…”), there’s a consistent approach taken to the use of these three themes. Each movement focuses primarily on one of them, but uses the next theme as a kind of ‘second subject’ which, to varying degrees acts as a foil, a counterpart or even a distraction from the ‘first subject’.

The theme predominating in the opening movement is Men of Harlech (MoH), though for the first few minutes you’d be hard pressed to know that. The symphony begins as if emerging from some kind of miasmic ooze, traces of melody barely detectable within its nascent, rumbling texture until they rise above a certain altitude. Ar Hyd y Nos (AHyN) is the counterpart here, and in fact it’s hints of that melody that just about appear first, though its definitely MoH that’s the first clearly-stated idea, erupting out of rapid, reedy, toccata-like material. Though it’s called a symphony and i’ve used terms like first and second subject, none of the movements exhibits a clear sonata form – if anything, the one element from that structure that genuinely permeates every minute of the Symphonie Improvisée is development, Briggs embellishing these themes and their component motifs pretty much as soon as we hear them. The whole work can essentially be thought of as one giant swirling maelstrom of development, a huge rhapsodic fantasia. The first movement sometimes gets fixated on the dotted crotchet-quaver motif of MoH, later on taking on the qualities of Edwin Lemare’s organ transcription of Saint-Saëns’ Danse Macabre, cheeky and light, its timbres coated in mixture-laden overtones. AHyN appears around two-thirds through the movement (7:27), in a contrasting episode where momentum is lost and the music enters an initially stodgy but later tranquil environment. It works as an effective period of repose before Briggs uses MoH to create a climactic march, though instead of ending the movement in a kind of militaristic fervour, he rather nicely dissolves the music via a blissed-out sequence and then an ever more quietly frivolous collection of florid runs.

AHyN comes to the fore in the second movement (11:49), positioned within brisk, florid but chugging material. Very soon, though, Hen Wlad Fy Nhadau (HWFN) pops up as the counterpart (13:12), the music seamlessly shifting into triple metre. Personally, i wonder whether this movement suffers somewhat from an excess of filigree. Having stated HWFN strongly, several minutes of in-depth development ensue, to the extent that it starts to feel just a touch insubstantial, as if Briggs were dancing around on bubbles of froth – though even as i write that, perhaps it’s no bad thing that the symphony goes in this direction, and it is at least consistent with the general character of this middle movement. The music emerges from the bubbles by coalescing onto the note C in octaves, which then get beautifully smeared into clusters, with a rhythmic pulsing going on within them. AHyN returns to prominence, first in a heavily elaborated version and then completely clear (19:15) within a juddering texture that’s used to increase intensity. Once again, though, Briggs is less concerned with amassing epic quantities of overload than with attaining a different kind of zenith, here ending up in a place of serenity.

If the previous two movements weren’t sufficiently impressive as a display of improvisation, for the final movement (22:16) Briggs gets stuck into, of all things, a fugue. Though HWFN is nominally the focus here, the entirety of the movement is a pretty combative back-and-forth between it and MoH. Often the shifts between them are abrupt, though they also appear superimposed on each other. Earlier on in the movement (26:34) the main rhythmic motif of MoH appears higher up while HWFN is on the pedals; a minute later HWFN moves up slightly while an ongoing torrent of counterpoint swirls past above, and later still MoH finds itself on the pedals as the fugue turns into a toccata. However and wherever these themes appear, though, they both get regularly broken up or otherwise interrupted by hectic outbursts of leaping chords, which manage to seem borderline chaotic while still sounding incredibly accurately-placed. The chords eventually take over, Briggs squashing everything under their immense weight, before letting off a few final fireworks prior to the symphony’s closing sequence of emphatic full stops.

Even by David Briggs’ standards, the Symphonie Improvisée on Three Welsh Themes is an absolute whirlwind of improvisational invention. Even more than is usually the case, a single listen is nowhere near sufficient to grasp all of the intricacies and details going on within its complex movements, which often blur the distinction between counterpoint and texture. But even more than being an astonishing musical achievement – in terms of both composition and performance – it’s just enormous fun.

Perhaps it’s worth stating the obvious: this is, technically, a world première, but if it really is as completely improvised as Briggs says (and there’s no reason to believe it isn’t), then this performance constitutes not only the work’s first but also its last performance – at least, in exactly this form. Reflecting on that somehow just makes it seem yet more incredible.