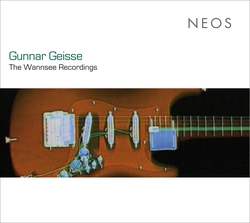 The Wannsee Recordings is a double album by German composer and improviser Gunnar Geisse, released on the NEOS label earlier this year. In some ways, that sentence is about as certain as i can be about the album because, to be honest, i was as impressed by it as i was flummoxed by it. Usually, when an album ramps up its flummox factor it doesn’t take too long for it to become unengaging and ultimately boring, but in the case of The Wannsee Recordings, despite the fact that i regularly found myself staring at the speakers in a certain amount of disbelief, something about it kept me hooked for its complete 150-minute duration.

Let’s back up a bit: the album is essentially an anthology of 34 individual improvisations, ranging in length from 58 seconds to well over 13 minutes, performed by Geisse using a special laptop guitar rigged up to a MIDI controller and a laptop enabling the instrument to transform into a host of other instruments and sounds. Sometimes the guitar stays fairly close to its own identity, but in most cases it would be impossible to tell that what you’re hearing is emanating from a guitar. Opening track ‘VII.4 [10100111_A7_⋆167]’, for example, is described as being for “electric guitar, brass, percussion, timpani and celesta’, whereas one of the most ambitious, ‘II.4+V.4 [100100+1100111_24+67_⋆36+⋆103]’ comprises “electric guitar, saxophone, drum set, woodwinds, strings, piano, choir, noises and trombone”. It’s not stretching a point to describe these improvisations as encompassing orchestral forces and scope.

In terms of its stylistic and methodological traits, The Wannsee Recordings brings to mind the late work of Frank Zappa, particularly his glorious swansong Civilization Phaze III. Zappa’s Synclavier-driven faux-instrumental high jinks (using samples recorded by Ensemble Modern) occupy a heightened, psychedelic hinterland of absurdity and wonder, and in the same way Gunnar Geisse’s improvisations inhabit uncanny, impossible soundworlds that are breathless, heady and at times borderline insane. The comparison isn’t an entirely fair one, since Zappa’s music was (and, more importantly, sounds) composed rather than improvised, but where Geisse’s pieces become problematic is precisely in the nature of their improvised behaviour, which might generously be described as ‘rhapsodic’, but other words like ‘haphazard’ or even ‘schizophrenic’ would suit many of them just as well. Put simply, it’s the difference between frenetic and manic, and while it’s fair to say that in none of these improvisations does it ever sound as if Geisse has lost control, the same isn’t necessarily true of the plot. There’s a pervading sense in many of these pieces that its sense of direction is arbitrary, that the software Geisse is using is glitching his materials to the point that while their integrity is maintained, their place within an ongoing continuity is much harder to comprehend.

For this reason, i found myself gravitating to the tracks where the pace was significantly slowed, or the ones with extended duration, where Geisse tends to give himself more time to let sounds speak and to structure and shape their forms more convincingly. Thankfully, there are many of these, of which ‘VII.1 [10011111_9F_⋆159]’ (steel string guitar, piano, string, drum set (brushes), vibraphone, woodwinds) is so wonderfully Zappa-esque it almost sounds like an outtake from Civilization Phaze III, laden with slithery strings threatening to derail a slow, ongoing melodic train of thought. Similar in tone is ‘VII.12 [10110011_B3_⋆179]’, where an assortment of wind multiphonics ring out amidst a glowering string texture laden with filmic menace, while ‘II.1 [11010_1A_⋆26]’, one of the longest pieces, channels its capricious shifts into an insistent but elastic underlying pulse (again, very Zappa-like) within a long-form, expansive narrative that, for me, ranks not only as the highlight of the disc, but one of the most exhilarating things i’ve heard this year. By contrast, ‘VII.6 [10101011_AB_⋆171]’ avoids conventional instrumental sounds almost entirely, focusing instead on intense, abrasive, abstract formations derived from field recordings and processed noise. This track is something of an aberration, but even when using more familiar sounds and timbres, Geisse’s tendency is to make pitch feel completely fluid, leading to beautifully Harry Partch-like harmonic convolutions.

Despite the fact that a great deal of The Wannsee Recordings plays exceptionally fast and loose with notions of continuity or coherence or even sense, it somehow never stops being compelling. This is probably due in equal parts to its ear- and mind-mangling levels of WTF and its underlying, irrepressible sense of sheer glee. Either way, i think the only thing i can say with certainty about this remarkable album is that the more i spend time with it, the more i find myself giving into its deranged charms and feeling less and less concerned about trying to make sense of it all. Ultimately, it really is enormous fun.

The Wannsee Recordings is available on double CD and digital download.