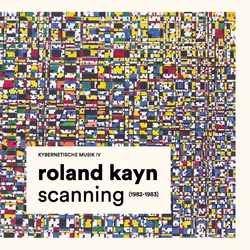 There aren’t many new releases that require you to free up huge chunks of time in your schedule, but then Roland Kayn isn’t like many composers. Two years ago, 14 hours were required to explore the vast expanse of his A Little Electronic Milky Way of Sound, which i ended up doing in a couple of 8-hour shifts across two days. The latest release of Kayn’s music, Scanning, lasts a mere 10 hours that, in contrast, seemed to pass with surprising briskness.

This wasn’t due simply to it being significantly shorter than its predecessor; i think it’s primarily to do with the nature of the music – particularly the kinds of materials Kayn uses and, most importantly, the way that they’re shaped, articulated and structured. It’s feasible to think of many of the 24 movements of Scanning as examples of what i’ve previously called ‘meta-ambient’, where a generalised steady state reigns over the long-term behaviour of the music, leading to in essence an equilibrium, within which a constant evolution takes place, sometimes involving abrupt shifts or alterations in its details. Long-form structural designs are of course nothing new in Kayn’s music, yet the specific way Scanning behaves sets it apart, i think, not only from A Little Electronic Milky Way of Sound, but from a great deal of his previously-released output. When writing about A Little Electronic Milky Way of Sound a couple of years ago, i commented on its generative, hands-off aspect, and on that occasion cited Autechre as a point of reference. Scanning also possesses this hands-off aspect, but a more fitting aesthetic reference this time might be the music of Andrew McKenzie’s The Hafler Trio project, particularly (but not exclusively) his last major releases from around 2003–2005. This is down to the way that pretty much every part of Scanning plays with and explores the relationship between pitch and noise. In some respects – and this is perhaps the only strong connection to A Little Electronic Milky Way of Sound – its 24 movements are almost variations on this theme.

So there are some movements that place pitch front and centre, perhaps none more so than the pair of pieces titled Cycloids. The first resembles the kind of slow-moving, cautious but glowering music of David Lynch’s collaborations with Angelo Badalamenti, low and ominous, essentially triadic yet always losing focus. The second arranges its pitches into an interlocking sequence of semi-frozen strata, where seemingly familiar chords (including, at the start, an almost clear major 7th) become uncannily weird. Cycloids II is also one of the most breathtakingly beautiful parts of the entire cycle, rich, variegated and deeply engrossing.

The opposite end of the continuum i’m describing here is, of course, noise, yet it needs to be stressed that it isn’t noise in the sense of a chaotic morass of undifferentiated elements. Noise in the context of Scanning is always apparent as being the accumulation or agglomeration of large quantities of pitch; in other words we never, ever fail to recognise pitch as being the origin and the cause of what we’re hearing. That doesn’t mean that Kayn doesn’t turn it into something abrasive; the third of the Anisotropic Modulations movements is an example of the extent to which these pitch-masses can be atomised into an abrasive granular force. But in fact this end of the continuum is used sparingly, and for the most part Scanning avoids extremes of density to the end of setting up complex shifting balances between clarity and vagueness.

Sometimes the music becomes akin to a mobile, bands or shards or sheets of floating pitch impacting upon, intersecting, interrupting or emerging from each other. Sometimes they form into clouds of varying nebulosity, where for long stretches their inscrutable inner mechanisms yield almost nothing tangible until – ah! – suddenly one or more pitches will puncture their surface, brightly shining out. Similarly introverted are movements that meander and seem preoccupied with themselves, bumbling and burbling along, surging at random, switching suddenly between rapidity and suspension. This kind of behaviour appears in numerous movements, most interestingly in Radi, the entire structure of which is a behavioural oscillation between high, rapid, twitchy ‘melodies’ – for want of a better word – and drawn out, transfixed chords. Kayn ramps up the density of the former to the point that they become the most dense blocks of activity – even more so in later movement Allotropic Radi – while the latter act as periods of relaxed respite where we can get our bearings.

i mentioned before how, like A Little Electronic Milky Way of Sound, Scanning also has a hands-off quality, and this means that in most of the movements there’s something of the ‘interesting’ / ‘ignorable’ dichotomy at the heart of Brian Eno’s definition of ambient. That’s not to say that any of Scanning is boring – it most certainly isn’t – but that there are times when the music actively pulls us in, or directs our focus, or startles us, and times when it’s prepared to do its own thing as if the very notion of a listener hadn’t even been conceived. Interestingly (as with all good ambient), these instances of interest and ignorability, change and homogeneity, vary from listen to listen – and no doubt from person to person – and while i’m not for one moment claiming Scanning to be an example of ambient music, many if not all of its movements demonstrate a similar kind of interplay with quasi-arbitrary structures and forms of long-term isotropic behavioural stasis.

That being said, often – very often – Scanning doesn’t merely attract but grabs our attention. For me, nowhere more powerfully than in one of the final movements, Counter Radi. Here, as in some of the earlier sections, the distinct timbre of analogue synthesizer technology is prominent, present both in wavering, tonally ambiguous melodies and cascades of blippy torrent textures. Yet Kayn shapes these into the most mesmerisingly wonderful yet disarmingly strange form of lyricism, forming the kind of dark, looming synthscapes that would perfectly suit one of Panos Cosmatos’ movies. This is Roland Kayn at his most spine-tingling, the music’s ongoing impression of possible algorithmic origins transcended by its immediate, direct tangibility.

All of which barely scratches the surface of the 10 hours of Scanning. It’s an outstanding and audacious achievement, and unlike A Little Electronic Milky Way of Sound it’s possible, even preferable, to explore it not in one or two herculean marathon sessions but in relatively short periods of listening. The cycle is up against some serious competition from other works in Kayn’s magnificent oeuvre (especially Tektra, another cycle with fascinating pitch/noise relationships), yet Scanning nonetheless contains some of Kayn’s most enthralling, palpable music – much of it at a tantalising liminal point blurring whether it’s human- or machine-made (or both) – as well as simply some of the most jaw-droppingly ravishing electronic music ever created by anyone.

Scanning comes in a handsome box containing the 10 CDs and a short booklet providing some sparse (but largely unnecessary) introductory notes, available directly from the Roland Kayn website.