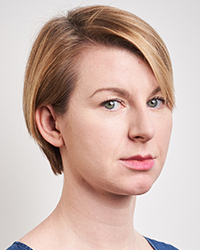 This morning (at 4:19am to be precise) saw the winter solstice, making this the northern hemisphere’s shortest day and the start of not only the season of winter but also a host of traditional festive periods. Being the day when we’re dominated most by night, it’s an ideal moment to spend time with the latest work by Maria Kõrvits, Darkness and Deeper Dark. To an extent, it continues a preoccupation from Kõrvits’ previous work Öö [Night], premièred earlier this year at the World Music Days, though where that piece was concerned with obscuring the distinction between melody and embellishment, her new work inhabits a place where any notion of such things is more or less lost entirely.

Composed for strings, a great deal of the piece behaves in essence like a noise study. Indeed, for the first couple of minutes pretty much all we hear is pure friction, creating a thick band of noise within which faint traces of individual pitches can just about be discerned. A few pitches protrude a little more after this, but they become lost in what by now is becoming a densely cluttered ball of seething movement: activity absolutely everywhere, details nowhere to be heard. Only when it dies back to a whisper does something a little more tangible begin to emerge, though in the form of tremulous surges like gangs of angry hornets, creating buzz-clusters around various possible pitch centres that, as a result, are all massively smudged.

What’s so fascinating about this is the way the ear and brain collude to make sense of such tantalising confusion. It brings to mind the texture works of Ligeti and Penderecki, in which we are caught between engaging with the mass effect or the bombardment of perceptible but impossible-to-grasp individual sonic actions, or – more directly pertinent – aspects of Marko Ciciliani’s Pop Wall Alphabet, where the ear practically conspires against the brain (or vice versa) to conjure up imaginary materials where they literally cannot be present. In the same way, each time i listen to Darkness and Deeper Dark, i find myself ‘hearing’ things within the melée that, until i eventually look at the score, i have absolutely no idea – and certainly no confidence – whether or not they really exist. Sometimes i even believe i can hear a melody in there, some fully-formed musical idea being swamped by the swirling mass of sound that turns everything into a monochrome blur.

Perception and aspiration play equal parts in this, a mixture of the things we believe we might be hearing and the things we believe we ought or want to be hearing. If music, like all the arts, speaks to us (at least in part) based on what we bring to it, then perhaps what we find in Kõrvits’ ever deeper darkness is entirely unique to each and every one of us. Only towards the end of the piece do things recede and clarify a bit, separating out into layers, polarising into low and high bands, and what may be the spectre of a large 7th or minor 9th chord – or which may just be yet another aural illusion. Whatever it is (or isn’t), it too vanishes in a network of faint tappings that brings the piece to an end.

This is music that doesn’t just depict darkness but makes it real and tangible. We don’t just hear it, we are confronted by it, we live it, we experience it; as such the piece is not simply about a literal darkness but also a figurative one, in which we as listeners inhabit a world lacking almost any clarity, full of uncertainty. In every sense we are kept in the dark.