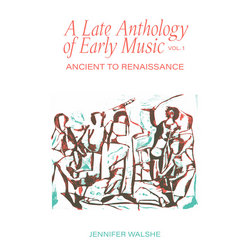 There are times, believe it or not dear reader, when i honestly wonder if i’m starting to get a little bit jaded. Listening can feel like a chore, and the endless parade of the novelty and the newfangled can blur into a torrent of ‘musica generica’ that becomes (at best) boring and (at worst) suffocating. Enter Jennifer Walshe. If there’s one artist whose work is always guaranteed to beguile, intrigue and fascinate, it’s Walshe. Above all, she is endlessly refreshing, presenting unexpected ideas in unexpected ways that are often as hilarious to experience as they are engrossing and confusing.

To say her latest release is no exception is to put it very mildly indeed. It’s essentially a collision between acoustic, in the form of Walshe’s voice, and electronic, in the form of machine learning duo Dadabots. The latter set to work training their neural network on recordings of Walshe singing through centuries’ worth of music history. The first remarkable product of this unique collaboration is A Late Anthology of Early Music Vol. 1: Ancient to Renaissance, 40 minutes of sonic disjecta membra that Douglas Adams might have described as being almost, but not quite, entirely unlike vocal music.

Anyone with a passing understanding of machine learning from the perspective of music will perhaps know what to expect here. Machine? – check; learning? – hmm, not so much. The extent to which it’s obvious in these 17 tracks that their origins lie in Jennifer Walshe’s vocal cords varies extremely widely. Not that that matters, of course; what’s more important here isn’t the fidelity of the process but the evolution of the process, the ongoing strenuous effort being made to attempt to parse, understand and reproduce – and then beholding the startlingly marvellous results in all of their discombobulating ineptitude.

The most far-removed are practically impossible to fathom: Gregorian chant rendered into gusts of synthetic wind; Jacob Senleches and John Dunstable draped and filtered into dense, spasmodic fugs of unclarity; Adam de la Halle transformed into a complex swirling maelstrom with glass-like motes glistening on its surface. Other pieces suggest organic sources but of a more animalistic kind. A ballade of Guillaume Du Fay is rewritten like a flock of birds, only hinting at its conclusion that something human is involved; organum by Pérotin is similarly avian, subjecting the calls of its exotic bird species to what appears to be crossfire from laser beams. Most of the time it is apparent that a voice is evidently in there – somewhere – yet it’s relentlessly subjected to diverse forms of distortion and obfuscation. The most ancient musical composition in existence, Seikilos’ Epitaph, acts as both an overture to the album as well as a paradigm for these pieces, reducing Walshe’s voice to weird blurts that could be speech or song, it’s impossible to say. Elsewhere the computer appears to be mangling Walshe’s material in real time, on several occasions subjecting it to strange grids of rhythmic regularity, almost as if the machine were trying to apply an elementary sense of order in the hope that it might bolster its attempts at realism.

Oftentimes there’s the distinct sense of a song lurking deep beneath the surface. Music by Hildegard of Bingen, Ockeghem and Jacob Arcadelt lie somewhere underneath delirious collections of whistling, burbling, spitting and buzzing (in the case of Arcadelt, having a child-like quality, like a sing-song gone catastrophically wrong). A madrigal of Gesualdo’s sounds for all the world as if it’s emanating from a mouth hopelessly filled with saliva, contorted into a mass of quicksilver sibilance peppered here and there with more tangible fragments. One of the more disturbing examples of this is Walshe’s version of Dowland’s ‘Flow, my tears’, where something akin to an instrument plays dumbly beside a mess of mumbles and synthetic shrieks.

Perhaps the most stunning of these pieces are the ones where the underlying vocality is strongest. Though hugely convoluted, a motet by Josquin des Prez is a cacophony of cut-up vocal remnants struggling to be heard through a stormy exterior. Another motet, by Victoria, speaks as a wavering lone voice sustaining impossibly, emerging from a chaos of percussive collisions and ominously aggressive whispers all around, as if the text were a subversive messages being articulated discreetly but urgently. Most striking of all is part of Palestrina’s Missa Papae Marcelli, the closest these pieces come to something unmistakably vocal: a chorus of sustained tones that clearly have the makings not only of a choral texture, but even harmonic progressions. There’s something heartbreakingly poignant about it.

Using a word like ‘heartbreaking’ may seem odd in a context such as this. As with a great deal of Walshe’s output, it’s possible to regard A Late Anthology of Early Music Vol. 1 as a large-scale tongue-in-cheek act of musical mischief. Yet for me the experience turned out to be infinitely more serious and thought-provoking than i had expected. It repeatedly brought to mind the experience of listening to Leyland Kirby’s hauntological epic Everywhere at the end of time, particularly its latter stages. In the same way as there, in Walshe’s material too there’s a permanently precarious signal to noise ratio, tilting dangerously between lucidity and confusion, moments of clarity and longueurs of bewilderment. Yet here we are at the other end of the spectrum, errors caused due to the nascence of neurons rather than their deterioration. In place of Kirby’s decrepitude, death and oblivion, Walshe’s music is formative, full of life and learning. It has a long way to go – a long way to go – and to that end it strives in the same way as Kirby’s dementia-ridden music strives, but its trajectory is altogether more optimistic and hopeful, and can surely only go upward. That being said, considering the power and intensity (and humour) of these 17 bizarre creations, one can’t help hoping that the machines will need plenty of time to get their processors around what really makes music tick.

A Late Anthology of Early Music Vol. 1: Ancient to Renaissance is released on 21 February on a limited edition cassette and digital download, both available from Walshe’s Bandcamp site.