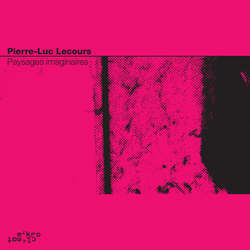 Another release on the Mikroclimat label that it’s taken me far too long to spend time with is Paysages imaginaires by Montréal-based composer Pierre-Luc Lecours. As the title – ‘imaginary landscapes’ – implies, the five tracks on this half-hour album create and inhabit artificial environments conjured up through the combination of real-world sounds with synthesizers, electric guitar and bass clarinet (the latter played by Charlotte Layec).

Some of these landscapes allow for a meditative engagement, in part due to a greater sense of passivity in their construction. Final track ‘Suspension’ is the best example of this, the sound of the clarinet a central (even catalytic) presence amidst gently swelling agglomerations of pitch and noise. Over time these swells seem akin to slow accents with extended resonances, embellished later with an assortment of clarinet trills. But for all its movement and detail, there’s a stillness at the heart of this piece, its notes hanging uncannily in the reverberant air. ‘Amor Fati’ is similar, comprising whoozy, vaporous chords and faint plucked string drifting through space. The environment is shaken by a number of restrained blows from its depths, triggering the appearance of numerous tolling bells; but again, the tone remains relatively calm and there’s the impression that this activity is happening at some distance – without actively seeking our interest – and we’re hearing it from afar.

More ambitious but still conveying a similar kind of passivity is ‘Passages’, where Lecours introduces sounds indicative of train travel. Around these are a collection of diaphanous floating notes and chords, as well as a low drone that only slowly emerges, while the clarinet is concerned with minimalistic gestures, primarily repeated notes and arpeggios. This palette of sounds becomes the basis for a music that continually tilts between light and shadow, speed and stasis, vagueness and clarity, intimacy and distance. Placid noodlings are answered by deep throbs; high clarinet squalls (sometimes not unlike animal calls) have their energy quickly dissipated in the atmosphere; clattering, hard-edged momentum is countered by smooth melodic shapes. The result is a curious equilibrium in which, to a greater extent than in ‘Amor Fati’ and ‘Suspension’, every action is to some degree a counterpoint to the preceding one, the total of all these actions being a kind of zero sum. Again, ‘Passages’ invites a meditative form of engagement yet its music happily fits few if any of the clichés and conventions associated with that kind of listening.

The other two pieces on the album have a greater sense of drama, and as a consequence make a more striking impression. Unlike the previously-discussed tracks, ‘Accalmie’ displays real unpredictability in its narrative. Its soundworld also has a more palpably three-dimensional quality (in both literal and cinematic senses), creating depth and perspective through the superposition of discrete layers. It’s impossible to say how many layers are present, but there almost seem to be as many as there are individual sound elements, each one – fast tappings, sustained tones, vague shuffles and scrapes, pitches by turns looming and twitching – occupying a unique position from foreground to background. It takes time for this dense habitat to be unveiled, whereupon Lecours courageously destroys it with a thunderstorm. The aftermath is a like a crude palimpsest, traces and echoes of former materials all but erased beyond recognition, all the while continuing to be spattered with rain. What appears to be a rapidly ascendant move towards a hefty climax turns out to be nothing of the kind, unexpectedly taking a left turn into a place of simultaneous rest and unrest. Expectations are thwarted everywhere in ‘Accalmie’, yet that only makes it more fascinating to behold.

But for me, the highlight of Paysages imaginaires is ‘Ton souffle’, five minutes of intensity full of fire and aggression. Layec’s bass clarinet becomes a vast, ominously imposing presence, first turning the sky black, and then almost cracking it open with heavy-tongued accents that cause deep ripples to resonate through the air, accompanied by angry buzzing. This exhilarating doom leads to a blasted wasteland coloured with quasi-demonic horn blasts and sonic disjecta membra, relics of an apocalypse that, somehow, become transfixed in a gorgeous moment of soft hovering shimmer at its close. Real-world sounds are to all intents and purposes absent here; aside from the bass clarinet, the origins of this landscape are unknowable, and all the better for it. This is electroacoustic music for the end of the world – what a marvellous way to go.

Paysages imaginaires is a digital-only release available from the Mikroclimat Bandcamp site.