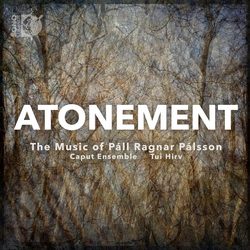 One of the first works of contemporary music that i ever got to know was Dérive 1 by Pierre Boulez. i fell for the piece pretty hard, and one of the main reasons for that infatuation – which hasn’t really subsided in the decades since – was the way Boulez constructs pretty much the entire fabric of the work from tremulous fibres that constantly vibrate, shimmer and thrum as if an electric current were coursing through them. Paradoxically, a palpable stillness emerges despite all this surface movement (not unlike the surface of water covered in pond skaters), creating a soundworld pulsating with life while conveying an air of quiet solemnity. A similar quality permeates the five chamber compositions on Atonement, a new portrait disc of music by Icelandic composer Páll Ragnar Pálsson.

The connection is reinforced by the fact that all of these works use a similar instrumental line-up to Derive 1, performed in this recording by Iceland’s premier new music group, Caput Ensemble. All but one of them also feature a voice – soprano Tui Hirv, the composer’s wife – exploring texts that draw on folk hymns, Icelandic poetry and the screenplay of Andrei Tarkovsky’s film Stalker. The nature of the active/static paradox is arguably most telling in the one instrumental work, in no small part because of the challenge thrown down by its title: Lucidity. On first contact, it’s tempting to consider that there’s something ironic about the idea of clarity or revelation coming from its tangled textures. But, it seems to me, the essence of what makes all five of these pieces tick is to be found in this piece. There’s the distinct sense that what we’re hearing, what the ensemble is doing, is less about cause than effect: an inner response to an outer stimulus, like a mind or soul being made to shake and resonate by something external. It’s rather like hearing the output of a seismograph – not an unreasonable analogy for a composer who has also written pieces titled Quake and Afterquake – with each instrument’s tremulant material the indication of some deep, profound movement.

The relationship the ensemble has with the voice is interesting. In Midsummer’s Night (recited by the poet, Ásdís Sif Gunnarsdóttir, herself), it’s the one occasion when this distinction between the explicit internal and implicit external is undermined. The words speak of an intense and ecstatic intimate encounter – “When we walked in High Volume / the clouds were opened and / You opened your mouth / a drink of gold dripping from sky / sun shining as we walked towards it / glowing into you / the bliss of a new day / holding hands…” – but are delivered with an impassive mode of speech, almost neutral in tone. Yet this serves as a potent external source to which the ensemble responds, the players’ swells and surges setting free and articulating something of the considerable emotional range locked away in those words. By contrast, in Wheel Crosses Under Moss the externals are perhaps more imagined than real. The text, taken from Swedish hymns, brings to mind the language of the service of Compline, a prayer at the end of the day in preparation not only for the night but also for night’s dread metaphorical twin, death. Now the trills and vibrations running through the ensemble become the perceived “perils and dangers of this night”: darkness, tiredness, being alone, temptation, the world, dying. The instruments form a close-fitting arrangement around the soprano, moving cautiously and carefully with, around and in response to her words. It’s refreshing to hear a nocturnal prayer like this expressed in such an unconventional way.

The monologue from Tarkovsky’s astonishing 1979 film Stalker speaks of this same relationship between internal and external worlds:

Let them believe. And let them have a laugh at their passions; because what they call passion actually is not emotional energy, but just a friction between their souls and the outside world.

It develops into a paean celebrating the importance and necessity of weakness, tenderness and pliancy, which are held to be “expressions of the freshness of being”. Perhaps this indicates that the tremulous nature of so much of the material in these pieces – the twitching pens of the imaginary seismograph – are a demonstration of that acute sensitivity, reacting to the slightest wafts of external stimuli, whether physical, emotional or spiritual. As in Wheel Crosses Under Moss, the relationship between the voice and ensemble in Stalker’s Monologue is intimate and interconnected, moving together in a halting fashion, with occasional lurches forward that stutter and slow. It’s the most breathy of the four vocal works, and in tandem with this enters the most vague, mysterious musical territory, the players forming a kind of abstract mandorla around the soprano. The piece also has a slightly more ‘exotic’ air due to the role of the harp and gongs in its seductive soundworld. The title work, Atonement, utilises the ensemble’s quivering, restless textures like worried waters; the soprano moves through them, the instruments seemingly parting around her. She sings of summer, personal epiphany, losing fear and “Coming to terms with a new world”, captured in a slow, steady melodic line that feels all the more smooth and secure flowing through such an agitated, turbulent soundscape. That being said, some of the most sublimely gentle music is to be found in Atonement, and its conclusion, the first response to this “new world”, is wonderful: reduced to almost nothing more than the implication of breathing or a heart beating, the one point in these pieces where the music’s inner response becomes implicit, to mesmerising effect.

There’s no indication that the five pieces on this album are a cycle, yet their similarities suggest a close kinship that makes them sit exceptionally well together and illuminate each other. Taken together, they’re a superb demonstration of the potency and poetry of Páll Ragnar Pálsson’s smaller-scale music: understated but powerful, strange but deeply personal.

Released today by the label that’s done more than most to promote Icelandic music, Sono Luminus, Atonement is available on CD/Blu-ray audio and download.