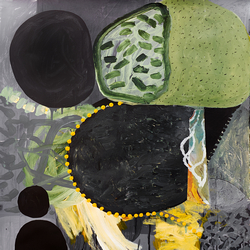 Despite being located at opposite ends of the aesthetic / behavioural spectrum, i’ve recently been finding that two new releases pose the same questions about the distinction between long- and short-term listening. In the case of Arboreal, the latest album by Canadian musician Jamie Drouin’s alter ego Liquid Transmitter, this arises out of its affiliation to the conventions of ambient music. Its eight relatively short tracks are all archetypal steady states, setting up simple modes of behaviour that are then maintained for four to five minutes. Furthermore, like its predecessor Meander, which Drouin released a few months back, the emphasis in these states is on their harmonic content. Each piece has a certain kind of modality that defines the limits of its pitch content. The title of Meander was a direct clue to its musical behaviour, and in Arboreal the emphasis of that title is less on the suggestion of multiple tree-like agglomerations (which don’t occur anywhere) than on, in Drouin’s words,

Half-seen limbs plot paths across the night sky – presences made known solely by the patterns in their wake.

This suggests a kind of ‘implied music’, about effect rather than cause. Certainly, the individuality of each piece makes it easy to think of it as a separate ‘limb’ from the others, and their overall behavioural similarity indicates that they are all part of, or offshoots from, the same ‘tree’. But let’s not labour the metaphor: it works but it’s perhaps nicer to keep it as a poetic background layer.

As i indicated at the start, what i’ve been finding particularly interesting about Arboreal are its long- and short-term distinctions. Steady states are all about this liminality, caught between perceptions of short-term change and long-term stasis, finite windows into infinite worlds. In Arboreal 1 (and elsewhere) there’s the impression that the specifics of its light plinks and plonks might be cyclical, though this is due to the limits imposed on them, both in terms of register and mode. The former (playing out over a low Bb drone) has some latitude, while the latter uses a pentatonic system comprising notes I, III, V, bVI and bVII – the two flattened notes causing the Bb major stability to ever-so-gently teeter back and forth. The same pentatonic system occurs in Arboreal 2, though there the modality – now rooted on C – is challenged by lacking a warm underpinning (it’s mostly in second inversion), and partly for this reason has a semi-frozen quality, as if the individual notes were coated in ice crystals, freezing as we hear them. The flattened 6th takes on a different role in Arboreal 8, acting as a pivot for the music to oscillate slowly between tonal centres of G and Eb while bands and flecks of pitch make its music similarly oscillate between disquiet and peacefulness.

Arboreal 3 and 6 are more passive pieces, both occupying reverberant spaces, the former presenting sparse intervallic twiddles (usually fifths) in an A major-implied modality, the latter one of two tracks on the album that are tonally ambiguous, consisting of resonant fuzzy pitch formations that, similar to parts of Meander, emerge like droplets floating in a liquid. Both of these pieces come across like processes that have been begun and then left to run unchecked for a time, which is interesting in the way it clarifies the other pieces as, despite first appearances, sounding distinctly more creatively active and considered. Arboreal 5 is a case in point; even more tonally ambiguous than 6, its atmosphere is polarised between depth, mystery and shadow, and occasional notes that glimmer and shimmer overhead. Within its narrow behavioural limits it could be randomised, but to my ear it sounds more purposeful than that – but then, in the best ambient music the boundary between active and passive decision-making is so often obfuscated and rendered moot.

In all these pieces, one’s attention is forever pulled between the microscopic and the macroscopic, between the effect of adding an individual note or dyad and the broader context within which it sits. For me, the most hypnotic piece is Arboreal 7, where the pitches take the timbral form of tolling gongs, lending them both metaphorical and virtual weight, and bestowing on the piece an extra layer of solemnity. Here too there’s the impression of possible circularity but, again, it’s an illusion caused by behavioural and registral limits, drawing us into a hypnotic environment where, more than anywhere else on the album, long- and short-term are perceived simultaneously throughout. 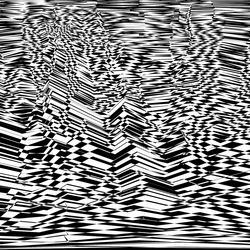 Where Jamie Drouin carefully places stable sound objects into a reverberant space, Jeff Carey‘s approach in index[off] seeks to flood a dry space with objects that are in a constant state of volatility and flux. In that respect it could hardly be more different, though Carey imposes similar limitations on his materials. Nothing is recognisable, there are no sounds here suggestive of anything other than synthetic (and/or massively processed) monochromatic building blocks, either percussive (impacts) or granular (wind-like). To an extent, conventional notions of ‘pitch’ and ‘noise’ are almost meaningless in this context, not because they’re absent – they’re obviously not – but because of the restless, ceaseless driving momentum with which Carey drives them along, causing them to constantly mutate.

As such, it’s not particularly meaningful to speak of what’s happening moment-by-moment in the 12 parts of this album (grouped under three headings: infinite queue, memory cell and gravity assist) as, from this short-term perspective, you could say that no sooner has a detail been heard than it’s already been swept aside by one or more details in the ongoing, outpouring torrent. That might suggest that a short-term focus is impossible or even irrelevant, yet the forcefulness of these micro-details makes them irresistible, continually grabbing our attention. Beyond this, though, despite their ephemerality we’re always being made aware of the quantity and quality of these transient inner details, some of which, it slowly becomes apparent, are part of larger – though still often gone in a matter of moments – sound formations, that are themselves part of even larger bursts of cohesive creativity. What this means is that the distinction between short- and long-term perception in index[off] is not a simple binary but a continuum of scales, resulting in a somewhat elastic form of listening.

If there’s a criticism to be made it’s twofold, resulting from the sheer relentlessness of this creative torrent and its somewhat limited sound palette. As a consequence, there are times when it’s possible to glaze over somewhat, an instinctive response to such non-stop input – though it’s important to stress that this is subjective insofar as when this happens (if it happens at all) will differ each time; it’s not a specific problem at a particular point in any individual piece. That being said, i value the unstoppable exuberance conveyed in these 12 tracks, particularly as they exhibit fascinating and highly dramatic extemporaneous structures. The rapidity of flux in infinite queue 2 is tempered by a persistent underlying rumble, which later becomes the aftermath of a sequence of little bursts, while memory cell 1 and 3 take the form of dull accents and nebulous swells in the midst of rapid ticking.

Where index[off] is at its best is when regularity breaks down, and when Carey’s gloves truly come off. In infinite queue 5 pitch emerges out of the juddering shapes that emerge from its volatile materials. Lacking any rhythmic impetus, it feels more organic and tactile as a result, as if we were hearing sound physically folding over and onto itself, like the way molten lava moves – and just as unsettling. Similarly irregular is gravity assist 1, a cavalcade of highly intense real-time mutations, and above all memory cell 4, where aggression is ramped up to maximum for an overwhelming onslaught of the most glorious scattershot electronica, shot through with brief, laser-like bursts of buzzing incandescence.

Both of these are are digital-only releases, Arboreal from the Infrequency Editions Bandcamp site, and index[off] from Jeff Carey’s Bandcamp site.