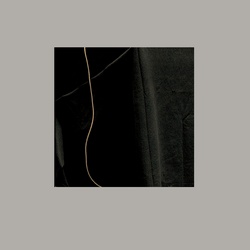 One of the most interesting things to emerge amid the massive glut of stuff released last Friday – in order to coincide with Bandcamp’s latest fee-waiver day; interesting how this has come to dictate so many musicians’ output during 2020 – is something that, once upon a time, would have been called a ‘single’. v03b-[ds.nla] is a digital release from long-time collaborators John Wall and Alex Rodgers featuring two tracks that amount to around 9½ minutes of music. In many ways, they feel like a continuation of last year’s album Soar, yet each track has something that sets it apart from their earlier ventures, either in terms of content or context.

No Longer Alone occupies familiar territory. Rodgers’ voice (consisting of parts of a poem by Allen Fisher) narrates and soliloquises, describes and lectures, referencing scientific and statistical notions and methods, sitting in the midst of polarised material from Wall: a hovering, rather static, pitch-focused background and a busy, percussive foreground. The combined effect brings to mind the similarly lectural Three Ways Of Saying Two (1986) by The Hafler Trio. What makes this track distinctive is the context in which Rodgers’ words are heard; while some of the content is lost in the (generally very restrained) plunks and thwacks of Wall’s soundscape, certain phrases pack a particular punch all the more forcefully being heard during the ongoing pandemic. Rodgers describes how “small populations plan to get off the planet before this / their baggage remains on the runway”, and how “our physics of forgetting coexists / with our absence of care / aspiration to the intervention of intelligence / has been cancelled”. Perhaps consequentially, scientific outcomes are thereby “determined by the stupidity of our decisions / there is no next time / we’re all in this together”, while also mentioning social distance, pathogens and the titular idea that we are “no longer alone”. i don’t want to make too much of this, and i certainly don’t want to suggest it’s a piece about or a comment upon what we’re all currently living through, yet this aspect of the text nonetheless gives the track a palpable extra resonance.

Wrongfoot the Servants & Darkshop is something unlike Rodgers and Wall have ever created before. It’s a song! At least, Rodgers’ voice (now conveying two texts of his own) has been autotuned – by Rodgers himself, not by Wall – in such a way as to become an uncanny, unreal cantor. As a consequence, the inscrutability of the text – as incomprehensible as it is strikingly evocative – is immaterial, soaring high and plunging low according to the sharp, accidental crenellations of its newly-imposed melodic contour. Rodgers pseudo-sings over a network of, among other things, what once might have been beats, mangled and crunched by Wall into submission so as to form a chop-change, stop-start environment, by turns punchy and blissed out. The second half of the piece finds Rodgers now rendered into a filtered growl, Wall pulling back (in a similar way as on Soar) to allow the words a largely unblemished centre stage.

In both tracks there’s the very clear sense of a more still, even placid background (sometimes, in Wrongfoot the Servants & Darkshop, more implied than present) in contradistinction to a volatile, shifting surface. For a long time this kind of thing has been absent in John Wall’s work; his highly minutiae-oriented output tended to lead, perhaps inevitably, to an utmost focus on the microscopic and the momentary. Here, though, the music has much broader and deeper scope, has room to breathe, and is open to the idea of the infinite rather than just the infinitesimal. Indeed, it’s such a contrast that there’s something, dare i say it, almost restful about the musical language here, though that’s mitigated by Rodgers’ voice which, no matter how it’s treated, is always compelling, forcing us to pay attention and take notice. It’s so great to hear this fascinating collaboration finding ever new ways to be articulated.

v03b-[ds.nla] is available from John Wall’s Bandcamp site; in keeping with the precedent established by Soar, full texts for both pieces can be found on the website.