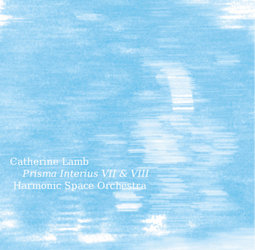 Back in 2017, when writing about the fifth and, at the time, latest in Catherine Lamb‘s ongoing series Prisma Interius, i talked a lot about consonance and dissonance, the way that its pitches began life around a central point from which they emerged and split off, ultimately creating a harmonic language that i characterised as “provisional”. And last year, when Lamb’s Atmospheres Transparent / Opaque featured in my Best Albums of 2019, with regard to Prisma Interius IX i remarked on the ambient quality of its behavioural language. All of these things can also be said of two other works in this series, numbers VII and VIII, which have recently been released together on a new album. The commonality this suggests means that it’s easy not only to hear these two pieces as a single work – the latter a continuation (or alternate rendition; or expansion) of the former – but as part of an over-arching, long-form, multi-faceted but single strain of compositional thought.

That being said, there’s much to distinguish between them. Prisma Interius VII is a duet for violin and ‘secondary rainbow synthesizer’, the latter being the name for a device “that uses the live environment outside the performance space as a noise generator for basic subtractive synthesis. The intention is to dynamically fuse the outside world and acoustic instruments and what emerges is a sort of Aeolian harp residue highlighting the spectral information the listener might perceive in a given moment.” The contribution of this instrument, as in all the Prisma Interius works, is extremely subtle but, perhaps precisely because of that subtlety, becomes the key element that gives the music real electricity and excitement. The violin’s material is slow and considered, positioning a variety of sustained tones in close microtonal proximity to each other, while the synthesizer initially sounds like a far-off continuous marimba roll. Over time, though, both parts grow in complexity, both inwardly and outwardly.

The language of the violin pitches becomes less certain, with more of a tendency to roam, in the process (by around the mid point, around 20 minutes in) conveying a significant melodic impulse. The synthesizer provides a context for this, an atmosphere around it. Yet it’s more than just that: slowly one can infer a strange kind of dialogue taking place, like a conversation playing out in ultra slow motion. All is stillness and intimacy, given a timeless quality due to the way the music seems cyclical (reinforced by continual stops and starts) while avoiding a clear sense of repetition. It’s a form of steady state, behaviourally consistent while its details continually change though, as i’ve indicated, with the most gentle dramatic arc. That drama, i admit, could be and probably is imaginary, but what isn’t imagined is its timelessness. This manifests in the fact that, like all music with a true ambient sensibility, the music could feasibly continue like this forever, and it’s worth noting how, at 38 minutes’ duration, this rendition of the piece is much longer than its 21-minute first performance at the 2018 Borealis Festival. Clearly it’s not only the harmony in these works that’s provisional but also their form.

Harmony plays a much more complex role in Prisma Interius VIII due to its greater number of players, comprising tenor recorder, viola (played by Lamb), cello, double bass and a pair of secondary rainbow synthesizers. Though behaviourally similar, the way the material alludes to notions of harmonic movement (often coalescing around possible major thirds and perfect fourths) leads to a fascinating push-pull of implied (non-)progressions. This defiance of expectations extends to the sound palette of the ensemble, which often becomes timbrally neutral, a collection of anonymous slow tones largely devoid of strong instrumental origins. Only at the start and end of each halting sequence do the instruments become briefly but clearly identifiable. Furthermore, equally hard to pin down or define is any kind of implied emotional tone. In practice, like the other aspects already mentioned the music’s relationship to such conventions is, at most, implied, but in the same was as the harmony appears to progress it’s impossible not to feel a gentle movement between quiet poles of happiness and discontent in its constant slip-sliding between sweet and sour major-minor connotations.

The combination of all this with the permanently inscrutable synthesizers here makes for true magic. Its middle- or background presence doesn’t simply act as an atmosphere but as a kind of glimmering light source, bestowing on the instruments a sheen or patina that, like everything else, is in continual flux. Thus, in ways that are hard to qualify Prisma Interius VIII becomes strangely moving, stunningly beautiful, achingly fragile – in fact, despite the greater number of players the piece often sounds far more delicate than the smaller-scale Prisma Interius VII. The pauses that keep recurring are an important part of this: while everything is moving and sustaining its intensity is so potent that it comes as a shock to hear it so effortlessly silenced.

The fact that a great deal of what one gets from these pieces is either imagined or imposed upon the music from one’s relative, entirely subjective, listening perspective hardly matters. These pieces continually draw us in and push us away, allusive one moment and elusive the next, familiar and alien at the same time. Perhaps the only definitive statement one can make about this music is that, from start to end, it is utterly mesmerising.

Released by Sacred Realism, Prisma Interius VII & VIII is available on CD direct from the label and also on CD and download from Catherine Lamb’s Bandcamp site.