It’s a work i’d very much like to write about in more depth at a later date, as there’s so much to say about it… 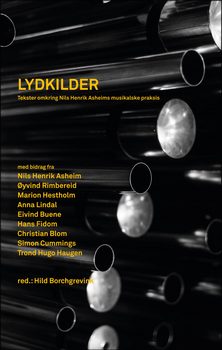 i wrote those words following a concert that took place almost exactly a year ago, before the time when lockdowns were a thing and i was up in the Arctic Circle at the Nordic Music Days in Bodø. i was referring to Muohta, a work for choir and strings by Norwegian composer Nils Henrik Asheim that was performed at the festival. i’m extremely glad that i did write those words, as i was subsequently invited to contribute a chapter about the piece to a new book about Asheim’s work, which was published last week. Titled Lydkilder (‘sound sources’), the book features contributions from an exciting collection of international writers (plus me), examining a wide range of aspects of Asheim’s musical practice, in addition to a number of texts by Asheim himself. My own chapter is titled ‘Reading the surface: an introduction to Muohta ‘, where i explore, among other things, the fundamental relationship between the work’s snow-based inspiration and the life, history, culture and place of the Sámi people. More about this below.

Lydkilder is published by Pelikanen, though if you’re interested in obtaining a copy, bear in mind that all but two of the chapters are in Norwegian. 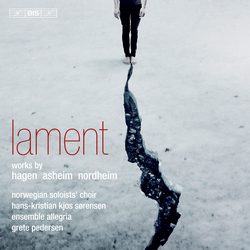 It’s a happy coincidence that Muohta is included on a new CD of Norwegian music released on the BIS label. The disc also features a pair of electroacoustic choral works: Lament by Lars Petter Hagen (from which the album takes its name) and Aurora by Arne Nordheim, all performed by the Norwegian Soloists’ Choir conducted by Grete Pedersen. In each piece the choir acts as a kind of fulcrum, conveying a behavioural cohesion in the midst of, at times, a much less certain environment. Nordheim’s Aurora is directed upwards, drawing on Psalm 139 and the conclusion of Dante’s Paradiso to construct a work focused on radiance and light. The addition of two percussion groups lends the piece something of a ritualistic quality, heightened by the voices veering between loud, boisterous assertions, quiet, rather intimate speech, and soft, transfixed notes. The piece essentially tilts over halfway through. The first part, setting the Psalm, is focused on the self, Nordheim matching this through the clarity and homogeneity of his choral writing. The second part, setting Dante, is focused on something altogether more transcendent, the choir now becoming more fragmented, sometimes vague, sometimes forceful and/or lyrical. More importantly, without us really noticing it, a huge sense of scale and space has developed, the choir’s actions being the fore- and middleground activity while a diffuse network of electronic textural details hovers in the background. There’s real ecstasy here, echoing Dante’s closing lines (the booklet uses Longfellow’s translation but i prefer Mark Musa’s):

I felt my will and my desire impelled

by the Love that moves the sun and the other stars.

By contrast, Lars Petter Hagen‘s Lament is directed downwards, conveying stark melancholy. Using a very early poem by E. E. Cummings, the music is polarised: slow-moving sustained notes in the voices, periodically disturbed and menaced by low but powerful electronic growls and percussive rumbles. The words are articulated as a kind of stretched out vocalise (individual words and syllables are often hard to make out), forming a generally restrained keening, abstract but deeply reflective. As in the Nordheim, the choir is again transfixed, yet here lost in its own aching, endless sadness, which briefly at its centre unleashes more overt anger. The musical language is consonant but complex, varying in terms of the clarity of its tonality. The overall effect is stunningly beautiful – not so much excruciating as exquisite pain, a perfect encapsulation of acute bittersweetness.

Nil Henrik Asheim‘s Muohta comprises 18 short sections, each titled after, inspired by and seeking (in part) to depict one of the hundreds of words in the Sámi language that describe different forms of snow. Reindeer herding is a primary activity for the Sámi, and snow – its presence or absence, its location, and its qualities – is a crucial factor in the way this herding is carried out. The Sámi language has therefore developed to incorporate a large number of ways to succinctly indicate and describe the nature of snow conditions and their implied impact upon the way the community plans and carries out its activities. The title of the work is the most commonplace Sámi word for snow, with the 18 sections using more nuanced words from their snow lexicon, including ‘áinnádat’ (fresh snow covering tracks, without making them disappear completely), ‘muovllahat’ (snow so deep that you have to wade to get through), ‘skárta’ (thin, ice-like snow on the ground, frozen into lichen and moss) and ‘jolas’ (trails in the snow, revealing animals have followed one another). For the choir, the sounds of the words are important, becoming the sung text; for the strings, it’s the definitions of the words that are paramount, functioning as descriptive and behavioural inspirations for musical material. However, these are not so much separate roles as priorities, and throughout Muohta there’s a clear sense that the choir and strings are not just intimately connected but are in fact twin facets of the same expressive ‘voice’.

Though abstract and impressionistic in nature, Asheim’s musical language often has an inviting immediacy that’s not difficult to read. In section 6, rádnu, we hear a parallel for the traces of animal trails in its network of sonic impressions, largely made up of whispered or indistinct notes and tremolos. Likewise in čiehpa, section 11, the emphasis of this word’s definition on being a place where animals sleep can be heard in the gentle, nocturnal atmosphere of the music, filled with soft sustained pitches and light tapping sounds. By contrast, Asheim taps into the playfulness implied in the skiing-oriented doavdnji by making section 9 an overlapping sequence of downhill sliding and scurrying, peppered with exuberant wild shouts. An opposite level of pace is heard in section 5, muovllahat, where the impression of difficult, deep snow is conveyed in laborious music. Rising syllabic phrases in the voices sound as if they are hauling themselves up, while upward scales in the strings are covered in tenuto lines, making each ascent strenuous rather than simple.

Something i explore in my chapter in the Lydkilder book is the ways that these different ‘snow surfaces’ can be read with respect to their cultural connotations, particularly in regard to the difficult and damaging relationship Norway has had with its Sámi community. But from a purely musical perspective the work is a by turns delightful and disconcerting exploration of both the quiet and the uproarious majesty of nature, its 18 short studies acting like windows into a series of adjacent worlds, each one akin to a miniature snowglobe that Asheim shakes up and briefly watches before moving on to the next.

Lament is available on CD and download. Also, the performance of Muohta that i experienced at the Nordic Music Days in Bodø, performed by Vocal Art with the Arctic Philharmonic Chamber Orchestra, is available to watch on YouTube: