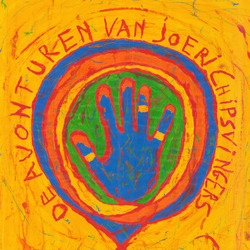 One of the shorter albums i’ve heard this year, but nonetheless one of the more arresting, is by the improbably named Joeri Chipsvingers (nom de guerre for Belgian composer Michiel de Naegel). Titled De Avonturen van Joeri Chipsvingers, it comes across as a sort of unhinged electroacoustic chamber farrago in eight movements, lasting just under half an hour. Stylistically, it embraces and mashes up the bold instrumental audacity of Frank Zappa and the frenetic postminimal stomping of Louis Andriessen or Steve Martland, with a dash of a drunk Michael Nyman and just a whiff of Carl Stalling for good measure. All this perhaps indicates something that’s overtly frothy and tongue-in-cheek, and while that’s undoubtedly true of De Avonturen van Joeri Chipsvingers, there’s more to it than that.

But let’s not dodge the fun at the heart of this album. Having opened with a minute’s worth of a voice calling out for Joeri, in the midst of a dense speech texturescape – he responds at the very end, “yeah?” – the opening salvo comes in the form of a ‘superrrrtheme’, a wild, tub-thumping romp in which seemingly every note being played needs to be reinforced by everyone present. Rhythm practically takes over completely (from time to time bizarrely bringing to mind Laura Branigan’s ‘Gloria’), though on two occasions the music tilts sideways, softening into a more lyrical mood. This is something of a paradigm of everything that will follow, a tension between wanting to just run amok while also inclined to reflect, and maybe even emote.

Track titles like ‘Labiel Trutje’ (unstable bitch) and ‘Spitante Raveteef’ (outspoken woman attending a house party – i hope those translations are more-or-less right) give some indication of the tone that pervades De Avonturen van Joeri Chipsvingers. The former track is unsurprisingly erratic, though it veers more towards restraint, focusing on nervy, hopping, out-of-sync staccatos that occasionally lurch into streams of rapid runs. The latter starts in similarly reserved, almost cautious fashion, with a bassoon taking the spotlight, but it soon enters its main sequence, a weirdly uncomfortable tutti where the instruments all seem to be wanting to work together but the result is straggly and eccentric, permanently off-balance; even when it gets the minimalistic momentum going there’s something strangely ponderous about it, like someone dancing under duress.

On two occasions the album cuts away to short passages that are electronic rather than instrumental. ‘Opschudding in de Pickles Groeve’ (turmoil in the pickle grove) is a wobbly, heavily-processed environment melding speech with queasy bass clarinet twiddles that end up in abyssal depths, whereas in ‘Hoop in de Toekomst’ (hope in the future) the spoken words are foregrounded against mysterious hanging pitches and a complex cloud of noise formed from what appear to be stretched out sounds. Though lasting only around a minute each, they’re both genuinely fascinating digressions, connecting back to the opening track and forming a parallel musical narrative that’s all the more tantalising for its extreme brevity.

Aside from the ‘superrrtheme’, the high points of the album are the fifth and sixth parts, ‘Joeri Chipsvingers en het Paprika Pact’ (and the paprika pact) and ‘Joeri Chipsvingers en het Lays Lament’ (and the lays lament). They’re by far the most substantial sections of De Avonturen van Joeri Chipsvingers, where the underlying dichotomy of reserve and agitation are explored most extensively. This is more the case in ‘Joeri Chipsvingers en het Paprika Pact’, where repetitious swagger, laden with accented melodic strands, eventually comes crashing into a climactic final third where all of its clarity and certainty are lost in a wonderful intense smearing, accompanied by an assortment of piano and percussion tollings. Following this, the ‘melody’ that manages to unite the ensemble at its close sounds fittingly weird, and rather forced. By contrast, ‘Joeri Chipsvingers en het Lays Lament’ occupies a more nocturnal soundworld, where notes hang and gently undulate in the air, sounding like gossamer sirens. There’s a vague noir quality introduced via a muted trumpet and, later, a walking bassline, the latter of which forms the basis for a stronger tutti section. Here, though, the dichotomous aspect of the album manifests primarily as a tension between energy and relaxation (or maybe resignation), resulting in ambivalent music prone to a kind of introspective melancholy, which is ultimately channelled into a solemn, communal hymn. This is a huge contrast to most of the rest of the album, and it not only makes this section feel all the more emotionally potent, but also highlights that there’s a lot more going on here than just a composer having a laugh.

i’ve been reflecting lately about how much music i’ve been listening to lately is either stultifyingly polite or just boringly vague. De Avonturen van Joeri Chipsvingers is neither, it’s a leftfield excursion into a by turns silly, solemn and surreal cavalcade of ideas that manages to be both touching and outrageous.