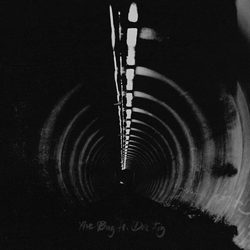 In order to write about In Blue, the new collaborative album from The Bug and Dis Fig, i need to break a couple of personal ground rules. #1: Don’t do nostalgia. #2: Don’t write about yourself. The reason i need to break those rules is because of the way In Blue has been making me reflect on my relationship with beats.

The age of 9 was a pivotal year in my life: i began to buy records for myself, and at the same time i was introduced to hip-hop. From then on, my teenage years revolved around the various evolutions and iterations of beats that permeated the 1980s and early 1990s: hip-hop, electro, house, techno, acid, trance. My musical proclivities were as eclectic then as they are now, and a plethora of other things passed into my ears, but i came to think of these beat-based idioms as something of a core or an undercurrent to my life, a baseline (no pun intended) of sorts that i’d regularly return to that offered a peculiar kind of affinity – an affinity that wasn’t simply intellectual and emotional but also physical.

i say physical yet, despite being so engrossed in these beats, i was never much of a dancer. i wasn’t by any means a stranger to dancefloors, nor was i particularly fussed about what anyone in the club around me might be thinking about my particular brand of movement. But the way the music impacted on me was such that i inclined not to move in time with the music but instead in an altogether more arrhythmic way. The beats were an asymptote that, here and there, from time to time, i tended towards. i suppose the by turns fluid and angular shapes my body made were therefore more a sympathetic resonance than anything else, not so much simply going along for the ride as responding to it. From my perspective it was as close as i would get to using the word ‘sacred’ about a personal experience: to be immersed in the beats and the basslines and the melodies was simply ecstatic: they defined the contents and the limits of my universe, within which i floated as a pale blue dot (or, more likely, purple), strangely gyrating through its sound-flooded void.

It’s a while since i last set foot on a dancefloor, but In Blue has resurrected these memories and made them all vividly real again. For, somehow, In Blue manages to capture and encapsulate the essence of that experience. Each of its dozen tracks becomes a self-contained, all-enclosing world. These worlds are constructed from the most rudimentary of sonic building blocks: beats, bass, voice, to the extent that they don’t so much sound like archetypes but prototypes, fundamental and primordial, their obvious modernity coloured by an impossible sense of the archaic. It brings to mind Leyland Kirby’s The Death of Rave in the way it pulls one into an environment that transforms the present into a sonic encounter with both past and future, though here in a much less specific, more elemental way. (In reference to Kirby, while it would be pushing it to describe In Blue as ‘hauntological’ i’d be lying if i said it didn’t have something of that quality too.)

These individual worlds sit within the bigger universe that is In Blue, each track bleeding and blurring into the next, the brief moments of pause between them feeling (just as they always did in the clubs) like yawning, aching lacunae, abject emptinesses desperate to be filled. The tracks ring out as variations on the same basic theme: shuffling rhythms at the centre, underpinned by buzzing, throbbing, athletic basslines emerging from abyssal depths, crowned by ethereal, even angelic vocals drifting from empyreal heights. On occasions, such as in ‘Take’ and above all ‘Forever’, the bass originates from a place so low that it becomes a kind of liquified tectonic plate on which everything is formed. (It reminds me of a performance i attended by The Orb in the early 1990s where the bass was so overwhelming i actually passed out.) In the aptly-named ‘Destroy Me’, Dis Fig’s sublime voice turns into sharp shards of reverberance hissing all around. Here and elsewhere she becomes a siren-like figure: though often not so much singing as whispering, and despite at times sounding distant and hard to make out, she nonetheless sits as a point of mesmeric stability and focus within these massively shifting and vibrating environments.

It’s a paradox that as a whole In Blue demonstrates again and again. In its encapsulation of an entire experiential world it is both timebound and timeless, deep inside us and everywhere around us, exquisitely intimate and unfathomably infinite at the same time. And via final track ‘End In Blue’ it concludes in the only way it possibly could, a breathless, blissed-out drifting return to the real world under the pull of its soft gravity, gently massaging our fibrillating hearts back to normality, while Dis Fig’s mantra-like voice gradually disintegrates into first crystals and finally vapour. In Blue is magical, mysterious, marvellous and majestic – and quite apart from being one of the best things i’ve heard all year, it’s easily the album that i’ve been compelled to play the loudest. Ditch the headphones; let it flood the space.

Released by Hyperdub, In Blue is available on CD, vinyl and download.