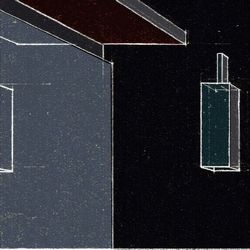 It was earlier this year that i first encountered the label Elli Records, self-described as “an independent label focused on music made by humans, for humans, with computers”. Nothing particularly unusual about that, but while i’ve only just begun to scratch the surface of their five years’ worth of releases, what i’ve heard so far as left me keen to explore all they have to offer. Apropos: Starflux by Paris-based, Italian composer and cellist Deborah Walker.

i guess this isn’t necessarily what the composer had in mind, since the last of its three tracks isn’t technically by Walker herself (though it also kind of is), but the way the album unfolds to the climax of its final track is not only deeply satisfying but also causes a reappraisal of all that went before. It opens with Starflux, a work for solo cello in which two simultaneous actions are performed: regular repetitions where the four strings are struck near the nut, and a slow glissando down the strings from the nut to the bridge. This results in an engaging contrast of dull thuds overlaid with continually shifting and dancing overtones (very similar to Fritz Hauser’s Shong, discussed in one of my Forum Wallis 2020 articles, where a similar effect is achieved with a snare drum). Sometimes reverberation makes its presence felt, and occasionally certain pitches become extruded, but otherwise the music is held in this tension of opposites.

The second track, Banda Starflux, is an electronic response by Walker to this piece, in which she sets out to explore the effect if more of the overtones were audible than tends to occur in practice. Her simulation of this is an expanding network of sine tone descents, initially parallel but becoming (or at least seeming to become) more convoluted over time. Eventually the clear sense of descent gives way to a more abstract environment of quasi-random shimmering pitch collisions, the nature of which evokes the world of bells and their complex harmonics.

Final track Pharus Novae, created by label-founder Emanuele Battisti, is a reinterpretation of these two pieces, where they are overlaid. The real and the imaginary thereby become integrated into a new, hyperreal version of Starflux in which its potential harmonic richness is allowed to fully ring out. Additional reverb can often feel like a cheap way to create a sense of awe and wonder, but the addition of it here works surprisingly well. Very appropriately, considering the original work’s title, the ethereally floating sine tones now become stars and constellations floating in space, driven along by the earthy clunk of the cello, resembling a motoric machine driving everything along at the centre of the universe.

Released earlier this year, Starflux is a digital-only release from Elli Records.