NB. While this article does not contain any specific plot spoilers, it does discuss various aspects of Saint Maud; anyone yet to see the film may wish to postpone reading further until afterwards.

For a long time i’ve been itching to write a large-scale text about the relationship between avant-garde music and horror film soundtracks. Now is not that time, and this is not that text, but i can perhaps scratch the surface of this subject a bit by considering one of the best movie soundtracks that i’ve encountered this year.

Saint Maud, by director Rose Glass, was released in October, and either side of the UK lockdowns i’ve been fortunate to see it twice on the big screen. As her first full-length feature, Glass is giving herself a tough time, as Saint Maud is not only one of the best horror films of recent years but one of the best films full stop. Even as i write those words, though, i wonder whether it’s fair or accurate even to refer to it as a ‘horror’ film, for many of the same reasons that it’s hard to place Ari Aster’s Midsommar into that same generic category. It’s so much more than that. Like Midsommar, Saint Maud ultimately plays out as an intense, intimate character study; and like the figure of Dani in Aster’s film, Maud – brilliantly portrayed by Morfydd Clark – is someone similarly damaged by past trauma. Saint Maud unflinchingly explores how this kind of damage, coupled with loneliness, inadequacy, bitterness and fear, are at the heart of the blinkered unthinking, blind acceptance and militant proselytizing aggression and judgementalism of devout religious belief. Beyond this, i won’t go into any details about what transpires in the film, as i’m sure there must be many people who’ve been unable or unwilling to get to a cinema to see it (it’s released on Blu-ray on 1 February next year). Suffice it to say that the word ‘scary’, thrown around so freely with so many 2nd- and nth-rate horror films, doesn’t even come close to describing Saint Maud. It is genuinely frightening, and its very last second of footage (literally, right before the credits start) ranks among the most heart-stoppingly horrific moments in all cinema.

Movie soundtracks today have become dismally predictable, falling into line with musical tropes and clichés that are the equivalent of the visual ones on the screen. Almost all of them – particularly the ones accompanying the most massive Hollywood productions – are instantly forgettable, the product less of a creative compositional imagination than the bland output of a thousand formulas. An exception to this, and it’s an exception that goes back historically a long way, is with films that to some degree align themselves with aspects of horror. It’s true that horror is just as trope- and cliché-ridden as any other genre – there must surely be more low-quality horror films released than any other genre – yet, perhaps due to its bold, often transgressive nature, fearless and bereft of squeam, i’ve been struck over the years at the number of times that horror-related movies have provided the perfect vehicle for a genuinely imaginative musical narrative. Among the more notable of these in recent years have been Bobby Krlic’s Midsommar, Colin Stetson’s Hereditary, Jóhann Jóhannsson’s Mandy, Jeffery Alan Jones’ Most Beautiful Island and Mark Korven’s The Lighthouse. Where some, even many composers mistake mere dissonance as a sonic synonym for scariness (with correspondingly empty results), in these notable exceptions to the norm the composers have embraced the whole musical spectrum in order to paint vivid and/or delicate musical tapestries perfectly matched to their images, as challenging as they are immersive. 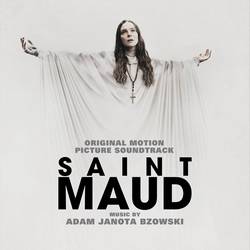 The score for Saint Maud, created by Adam Janota Bzowski (also his first time working feature-length), deserves to be added to this list. Considering the scale and power of this film, it’s to Bzowski’s credit that he’s taken such a restrained approach in his music. The fact that the soundtrack has a duration of a little under 29 minutes is significant; i’m not sure if every morsel of music used in the film has been included here, but if so it means that only one third of the film’s 84-minute runtime has accompanying music. Thinking back to the two occasions i’ve seen Saint Maud this feels right – but in any case Bzowski’s approach is a world away from the attitude that’s become stubbornly and stupidly entrenched in the minds of so many film (and TV) composers, convinced that the score must permeate each and every moment of the movie, like a kind of musical cancer.

Instead, Bzowski doesn’t so much create an aural context for the on-screen narrative as provide a psychological parallel of it. The more time i’ve spent with his score, the more i’ve realised it’s what i imagine Maud’s mind would sound like if translated into music. One of the main areas where this manifests is in its contrasts – or, more accurately, collisions. Musical ideas break off and interrupt each other, sometimes with considerable force, sometimes effortlessly. It gives the impression of multiple strands of understanding sitting in stark contrast and conflict with one another, a confused train of thought, and above all the desperate need – and, at times, inability – to subjugate or repress more painful perceptions of truth in favour of a less challenging, anodyne fiction.

Stylistically, the murkiness of this soundworld is suggestive of dark ambient. This is another over-used trope of horror movie scores, a more amorphous form of the ‘dissonance = scary’ fallacy. i’m reminded of another film focusing on a religious antagonist (though one positioned at the opposite end of the piety continuum), Paul Schrader’s First Reformed, a remarkable film blighted by blank, pseudo-portentous glower-rumbles courtesy (if that’s the right word) of Lustmord. Though far removed from Hollywood, it’s no less lazy an approach to scoring (or, indeed, music-making in general), projecting the belief that merely farting deeply and slowly into a space is enough to create a meaningful ‘atmosphere’.

By contrast, in Saint Maud Bzowski’s dark ambience is full of personality, shot through with a welter of elements that range widely in their tangibility. One of the more forceful is a clunking wooden percussion motif that recurs at various points. Both its closeness and its dryness come as something of a shock in the midst of the more distant, nebulous fug within which it usually appears. Throughout his score, impacts are invariably dull and muted yet extremely close, creating a deeply claustrophobic sensation. Perhaps the greatest force is heard in horn-like calls that erupt unexpectedly; in one of the most breathtaking tracks, ‘Revelation’, their power is such that they positively thunder, causing ripples through the landscape. In conjunction with this are massive bass pulses that inject menacing momentum and ramp up intensity. This track is also an outstanding example of the abrupt volte-faces in the score: at its high point, Bzowski cancels everything out completely, abruptly switching to faint, floating music with warm strings and the strains of a far-off music box. i’m not sure i’ve heard a music box in a horror score since Christopher Young’s masterful work on the first two Hellraiser films (apropos: Bzowski’s horn calls bring to mind Young’s Leviathan music from Hellraiser II), but it sounds every bit as a creepy and distressing in this context.

There are times when the music evokes the later portions of The Caretaker’s Everywhere at The End of Time in its burying of ideas deep within a largely impenetrable sound mass. What Bzowski calls the ‘Main Theme’ demonstrates this at the start of the score, setting up a deep drone with some vague wind noise, within which faint instrumental shapes can be heard moving. Likewise, in the score’s other theme, ‘Maud’s Theme’, as well as in later track ‘Bedside Manor’, voices can be made out, chant-like and whispering respectively, though remaining indiscernible. There’s the distinct impression here of reality become semi-lost within the sonic smog, and this is indicative of the collisions i spoke of before: like Maud herself, the music is either decorated in gold leaf or coated in blackest pitch.

Another source of friction comes from abrupt tussling tilts between the kind of nebulous material i’ve described and sudden outbreaks of marshalled regularity, coming across as fittingly vain attempts to introduce clarity and certainty to what is otherwise ambiguous and erratic. The most prominent example of this comes in the first of two tracks in the soundtrack that deviate from everything else. ‘I Think It Went Well’ is a brief (56-second) reverie where fast flutes occupy an imaginary oasis of cheerfulness and positivity. This is answered in the closing track, ‘Saint Maud’, where wind instruments return, although now to articulate something akin to a funeral dirge played on a dark day with glimpses of sun piercing through the clouds. Melancholic, wistful, plaintive, even somewhat baffled, it’s the one time when Bzowski’s score leaves Maud’s head, reflecting on the events that have taken place. It plays out over the film’s credits as an epilogue, and in the way it sounds like the music is walking on eggshells, it’s an ideal accompaniment to the sense of stunned shock one’s likely to be feeling at the end of the film.

Once again, one of the most outstanding movies of the year has been matched with one of the best movie scores. It testifies to the fact that less is so often immeasurably more, that soundtracks don’t need to slavishly and superficially mirror their dramas but can more creatively inhabit, pervade and enhance them, and that the most terrifying jolts can come from the gentlest and quietest of gestures.

Released at the same time as the film, a couple of months ago, by Milan Records, unfortunately there’s not (as yet) a physical release of Adam Janota Bzowski’s Saint Maud soundtrack, but there are lossless download options available from Presto Classical and Qobuz.

Great piece about a great soundtrack. Acute observation about what makes it, in it’s restraint and originality, such a powerful score