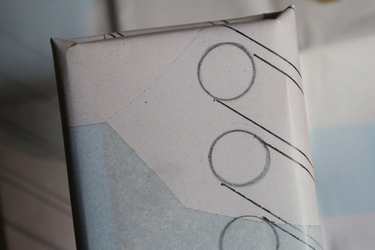 As i’m sure i’ve lamented previously, the organ is a bit of a neglected instrument in the world of new music. No doubt that’s due in part to its historical associations and also the site-specific nature of so many of them, but all the same, considering the range, power and versatility of the instrument, it’s a shame. All the more reason, then, to loudly trumpet (or should that be clarion?) contemporary explorations of the organ, particularly when they’re as imaginative as Luft by Danish composer Sandra Boss. How exactly the music on Luft was created is hard to say, but an organ (midi-controlled) is clearly at the epicentre of it, embellished with a number of other sounds and objects.

The album is divided in two halves, the first of which comprises four episodes – ‘Inde’, ‘Ude’, ‘Himmel’ and ‘Dans’ – the second a single, extended idea, titled ‘Stille’. There’s a great deal of variety in these pieces, but what unites them is their interplay of intermittent, faltering tones. Both ‘Ude’ and ‘Dans’ have these playing out in the midst of rapid, machine-like pulsings. In ‘Ude’ the pitches retreat almost into the background, if anything providing a muted palette backdrop to the more insistent and prominent percussive pulse. Here and there we can hear some of these pitches sliding up and down, and only a gentle push in intensity causes the pulse to vanish, finally revealing a little more of the wonderfully strange details that have been going on behind. There isn’t this distinction between pitch and pulse in ‘Dans’; instead the two are one and the same, the pipes seemingly subject to a runaway case of fibrillation, turning them into a choir of spasmodic chirps and flutters. Again, individual tones can be heard to slide (downwards) within the texture, but what makes this episode so mesmerising are the variations in density, seemingly occurring at random.

‘Inde’ sets up a slightly throbby band of pitch alongside regular bursts of noise, gradually turning on and off additional notes either side of this band. It’s a fascinating combination of stability, coming from the regularity of these tones, and instability, due to the inherently faltering and wavering quality of pretty much everything we’re hearing. Nothing sounds certain or reliable; all is delicate, fragile and potentially on the cusp of sputtering to a halt. Fittingly, ‘Himmel’ emerges from the sounds of electronic pseudo-birdsong, over which a collection of high sustained tones form cloud formations of gently piercing clusters.

‘Stille’ fills the second half of Luft with a 15-minute study of sustained tones of varying clarity. In some respects it’s both a synthesis and an extension of ideas from the previous four pieces. To summarise it as a network of discrete pitched ideas happening at different proximities doesn’t even begin to suggest how engrossing it is. The ear is constantly pulled around: to sounds seemingly trying to haul themselves into being right in front of us, to breathy whistles in the far-off atmosphere, to more tones falling somewhere in between. All the while, these different elements continue to change shape and evolve new melodic possibilities, cluster agglomerations and timbral alterations, often polarising to the extremes of register. In many ways it acts as a steady state, though the extent to which Boss has meticulously crafted its materials or allowed them to unfold subject to coincidence and chance is impossible to tell. Not that it matters: ‘Stille’ is a hypnotic, beautiful experience, one that sounds incredibly different and new on each successive listen, exhibiting an utterly avant-garde yet recognisably lyrical sensibility.

Released by Falt Records in early 2019, Luft is available as a free download from the label’s Bandcamp site.