For me the basic idea how to translate from one field of art into another is not to imitate the surface (like programme music) but to find underlying abstract principles and give them an acoustic representation.

These words of Klaus Lang (from a lecture he gave titled ‘Boston Beauties’) refers to the fundamental relationship between his sources of inspiration and the compositions that spring from them. He was speaking there about his 2018 work Parthenon, which drew upon both the overall architectural design of that building as well as its enormous frieze. Lang describes how

the boundlessness of nature as depicted in the frieze is represented [in Parthenon] by numbers taken from the endless Fibonacci series, whereas the principle of order and lawfulness is present through the usage of static and confined Pythagorean number proportions.

A similar relationship lies at the heart of The Thin Tree, an orchestral work Lang completed in 2014 that references the mythological tale of Daphne and Apollo. ‘References’ is perhaps the best word for it because, in a similar way to Parthenon, The Thin Tree is not at all concerned with narrative but instead taps into the key moment of the tale, Daphne’s transformation from a river nymph into a laurel tree. Lang has essentially taken the myth and both distilled and abstracted it. As such, the piece doesn’t so much seek to convey a clear sense of direction – still less a desired end point or culmination – but focuses entirely on inner processes of development and change. This also mirrors the essence of tree-life itself, an ongoing process of creative growth that continues for as long as the tree can manage to maintain it. In a recent email exchange with Lang about the piece, it became clear that the polarity at the heart of the myth – the opposing characters and qualities of the two protagonists – are something of a parallel of Lang’s relationship with his inspirational starting points, Daphne representing nature and natural growth, Apollo civilisation and intellectual abstraction.

While i’ve said that The Thin Tree isn’t concerned with a clear sense of direction, that doesn’t mean the piece lacks clarity of purpose. The piece emerges from a series of four descending pitches heard at the start – A, F, E, D (or, written another way, D A F (N) E) – that Lang has described as being the basis for everything that follows. It’s impossible not to notice that that collection of pitches encapsulates a number of expanding intervals (semitone (F-E), tone (E-D), minor third (F-D), major third (A-F), perfect fourth (A-E) and perfect fifth (A-D)), and the various sections of the piece are each defined by a certain interval. However, while clearly of fundamental importance, i would argue that what comes across clearest of all in the work is its (even more fundamental?) ongoing process of development. On the one hand, it can feel hard to point to specific moments in the work as examples of that process taking place, since the fabric of the music (as in other pieces by Lang) consists of very long, sustained and slow-moving notes. On the other hand, in such a context as this anything moving or changing is extremely obvious and a potential sign of an underlying process. On the other other hand, determining exactly how or what is the nature of the process (whether locally or globally) is something that only feels more certain over longer periods of time, often only after the piece has evidently moved beyond the section of music we’re thinking about. 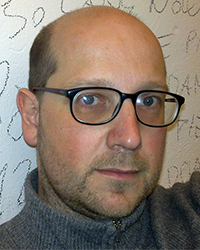 Perhaps the clearest way to begin to latch onto this organic process of growth and development (which, like Parthenon, also employs Fibonacci numbers and Pythagorean proportions) is via the perception of clarity itself. Heard broadly, The Thin Tree moves between episodes where much, if not everything, is nebulous and vague, and occasions where there’s a tenuous and ephemeral yet nonetheless distinct impression of certainty, the latter acting as a brief resolution to the surrounding periods of tension. Sometimes this takes the form of triadic connotations, sometimes it’s simply a few proximal pitches that protrude or are exposed sufficiently to coalesce into a distinct shape or object.

But it’s more than just a simple polarity of intangible and tangible materials. Repeated listening reveals more and more inner details within this continual flux, details that cause the music to rise beyond its (Apollonian) abstracted intentions and tap into something less purely intellectual, more emotional and heartfelt (and Daphnean). Hanging, clashing wind notes project plaintive whiff of melancholy; and there’s a recurring idea – within the ostensibly gravity-less environment – of sounds gradually falling, initially around four minutes in, but more pronounced a minute or two later, that creates a gorgeous, mesmeric but somehow heartbroken soundworld.

As a listening experience, the ear is continually pulled between these and other (often short-lived) instances of small detail and the more massive organic entity that they exist within. This seems entirely in keeping with the notion of how we might look at an actual tree, sometimes regarding the entirety, and the enormity, of its bulk and overall dimensions, shape and character, sometimes looking closer-up at the twists, protrusions and activity going on in smaller regions. Regarded holistically, a tree is a network of multiple, simultaneous, interconnected but discrete processes of development at a multitude of scales, and The Thin Tree both abstracts and embodies that idea in its method and materials.

In another lecture, ‘Zurbarán and Zobel and the translucent cow’, Lang speaks of how, in the paintings of Zurbarán,

[i]n the act of concentration and contemplation on these simple objects to the utmost, simple and mundane things are transformed into a gate to the realm of the sublime.

In Lang’s own contemplation, via myth and natural reality, his abstracted vision of a tree attains a similar kind of sublimity. Though it has an obvious beginning, The Thin Tree feels as if it could – or, at least, aims to – continue on forever: changing, evolving and growing into eternity.

The world première of The Thin Tree was given by the BBC Scottish Symphony Orchestra conducted by Ilan Volkov, at the 2014 Tectonics Festival in Glasgow.