When choosing the theme of nature for this year’s Lent Series, one of the first works i knew i wanted to include was Histoires Naturelles, a collaboration for voice and electronics by Ute Wassermann and Richard Barrett. Not to be confused with Ravel’s song cycle of the same name(!), the inspiration for Histoires Naturelles came in part from a remarkable mid-16th century publication titled Les songes drolatiques de Pantagruel (The drolatic dreams of Pantagruel). Published by Parisian bookseller Richard Breton, the book’s title references the work of François Rabelais, whose most celebrated work, La vie de Gargantua et de Pantagruel (The life of Gargantua and of Pantagruel) is an earthy, occasionally outrageous tale of the adventures of the two titular giants. Breton’s book is something of a curiosity: the collection of 120 woodcut images it contains feature an array of discombobulating and grotesque creatures that, Breton claimed, constitute “the last” of Rabelais’ work, which he felt “compelled to bring to light”. It’s widely accepted today that this was a pseudepigraphical ruse, and that the images were not by Rabelais but by François Desprez, an illustrator who had created similar works around the same time. Not that it matters; Breton’s book (available in multiple formats here) is a marvellous foray into a mad, oblique world of contorted and incomprehensible biology and culture – which seems a fitting phrase to bring us back to Barrett and Wassermann.

These 120 woodcuts constitute a kind of absurdist template for the soundworld and behaviour demonstrated in Histoires Naturelles. In this respect, one could argue there’s nothing remotely historical or natural about it, though, being someone who grew up reading large amounts of classics, mythology and fantasy, i find there’s something grippingly immediate about its unhinged characteristics. As such, Histoires Naturelles is not a work that needs or would benefit from a blow-by-blow of its musical narrative. In some respects i tend to listen to it in a similar way as another early work featuring Wassermann and Barrett, Gute Nacht, created as part of FURT’s (i think) abandoned ‘Failed Experiment’ project in the mid-1990s. Histoires Naturelles is a similarly visceral, immersive sonic experience in which trying to make sense of what one’s hearing, and how it relates to what came before or what might follow after, is as doomed as it is exhilarating. Just like turning the pages of Les songes drolatiques de Pantagruel, what comes next is impossible to predict and baffling to fathom. 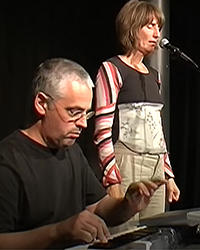 The relationship between voice and electronics is one that is deeply enmeshed, aided by the fact that Wassermann’s voice often sounds not remotely human and Barrett’s electronics are likewise suffused with sounds that are acoustic and organic in nature, plus the way they each imitate one another’s material. Wassermann, in particular, is stunning in the way she channels a kind of extreme glossolalia, manifesting the calls, mannerisms, tics, traits, instincts and behaviours of any number of bizarre, imaginary lifeforms. Barrett both establishes the wider world for these lifeforms, as well as teasing out specific aspects of Wassermann’s material while also, it seems to me, acting in an antagonistic role, throwing new objects and ideas into the mix that Wassermann is forced to contend with (or perhaps this goes both ways: mutual pro/antagonism.) Along the way, the piece veers between wonderful panoplies of acoustic and electronic melding, surprisingly delicate and lyrical interludes that evolve into bird- and/or insect-like sounds, periods where the vocalisations seem to break down completely and the piece enters a vague form of hinterland, and several sequences where it seems as if Barrett and Wassermann are simply trying to outdo each other in terms of raw, animalistic intensity, energy and tenacity. This diversity of musical attitudes makes Histoires Naturelles all the more effective and engaging: a distinct sense of vitality and emotional weight emerges from its conveyor belt cavalcade of madness and monsters.

Whatever else may be uncertain or confusing about Histoires Naturelles, it’s clear that the piece is a white-hot testament to the electrifying power of Wassermann & Barrett’s collaboration, showing off both of them at their best. Premièred on 26 April 2002 at the Wittener Tage für neue Kammermusik (and given a second performance the following day), the piece seems to have more or less vanished into obscurity since that time. An excerpt was included on the accompanying Witten festival double-CD released the same year, and a truncated version (missing the first minute) can still be downloaded via Barrett’s website, but it’s no longer included in Barrett’s list of works and doesn’t appear to be mentioned anywhere else. It’s a shame that such an engrossing and powerfully successful work as this should have disappeared without trace – but still, here it is in its full, original, 17½-minute deranged glory.

Thanks Simon for putting this up – I’d almost forgotten about it too!