In addition to the various multimedia / audiovisual events at Borealis 2021, the festival included a number of more conventional concerts. Violinist Ricardo Odriozola’s recital featured a mix of Norwegian, British and US works, two of which, Dániel Péter Biró‘s blink-and-you’ll-miss-it Moshe Went Up and Tim Hodgkinson‘s The Landscape Theory of Mind proved to be pretty impenetrable (in Biró’s case, it took almost as long to read the programme note – which bore no apparent relation to what we actually heard – as to listen to the piece). Kari Telstad Sundet‘s Reticence, receiving its première, was far more involving, taking J. S. Bach’s D minor Chaconne as a starting point, using it as an allusive reference point rather than a source for quotation. The nature of a chaconne – something going round and round, varying as it does so – was a quality imbued in the piece, which focused primarily on an intense melodic line where velocity tended to keep sputtering out. Paradoxically, it was during these subsequently delicate and fragile moments that the music felt most powerful. 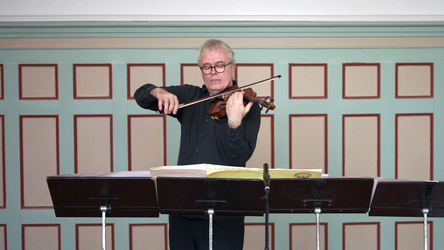 Jostein Stalheim‘s Av garde underwent an evolution toward increasing fluidity and stability, treating melody like a kind of asymptote to which it tended, while Rainbows Stretched as Endless Reins by Kathryn Alexander took ideas from the poetry of Rimbaud to form a litany of abstract shapes and gestures. Though their ferocity and virtuosity felt a touch anonymous and superficial – more about display than content – that didn’t stop it from becoming quite exciting. Similarly abstract but channelled into something very much more tangible was Mogens Christensen‘s Dreamless Fragments, which established its essential tremulous character through violent contrasts in its opening minutes. It says something about the breadth and scope of this piece that, whenever i’ve reflected on it, my mind thinks of it as an orchestral work. Odriozola conjured up a dazzlingly demonstrative sense of both force and narrative, the nervous undercurrent of the piece cut through with sharp chords – in this context, having such clarity they practically lacerated the texture – before squalling down to almost nothing, then being directed into beautiful lyrical trajectories in the upper regions of the instrument. There was something almost symphonic about the piece, testifying to the extent to which both Christensen and Odriozola transcended and redefined the apparent limits of a solo violin.

The festival’s second evening was devoted to four young composers, in a fascinating concert given by early music ensemble Currentes, comprising a quartet of voice, harmonium, recorders and baroque cello. The presentation of the concert was very striking, the ensemble arranged in a spotlit black void, creating a potent, heightened atmosphere. So effective was this atmosphere that it was easy to believe that the arrangement of players and their behaviour within the space had been choreographed into the scores of each of the four pieces. Beyond this perhaps imaginary aspect, all of them to some degree engaged with ideas from, or just the idea of, early music. 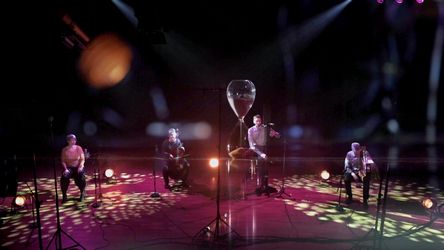 In Sølja mi, Vegar Guleng charted a progression from faint tremulous tones in both real and figurative darkness, over an increasingly wild contour (led by the cello) that eventually receded into something like animal calls. Whereupon an English song struck up, an episode of recognition that was subsequently fragmented when Bodil Lunde Rørtveit’s voice shattered into twittering vocal tics. The piece conveyed the lovely impression of a kind of alien folk music, a vestige of which echoed in the instruments at the work’s close (Rørtveit having left the stage) in weak, scratchy remnants.

By contrast, Tord Kalvenes‘ Fractions, for all its boisterous, even obstreperous, energy, was aimless and indifferent, in spite of its most interesting episode, breaking out into a weird form of madrigal, as if all of them had remembered this music simultaneously. Mirte Bogaert‘s for people with instruments in a space was just as energetic but much more coherent in the way its convoluted narrative unfolded. This was the piece – both due to its title and the way it behaved – that most made me miss the fact i wasn’t physically there in the space with them. Seemingly articulating four facets of a single voice, the players appeared to be fashioning music from elementary sonic particles – all impacts and friction – arriving at something that mysteriously sounded consonant and dissonant at the same time. Twice, these experiments coalesced around dronal, quasi-Baroque sequences, articulated as playful nonsense, leading to a deliciously vaporous coda.

But the piece that proved most effective of all was the one that, when first listening to it, seemed to be by far the least promising. It’s often the case that the most interesting, engrossing music catches you unawares, and that was absolutely true with What if. by Agnes Hvizdalek. Incorporating an hourglass – which appeared to be dictating the precise length of the composition – the music emerged via light dronal rhythms and tappings, and the makings of a melody moving between the players. It began to seem monotonous, but as it reduced to very soft traces and gentle sustained pitches, its hypnotic effect took hold. By reducing to infinitesimal size, its mesmeric pull became inversely expanded. And within this abstruse landscape of hovering drift and croak, Hvizdalek evoked not simply early music but something much more ancient and primordial. Amazing. 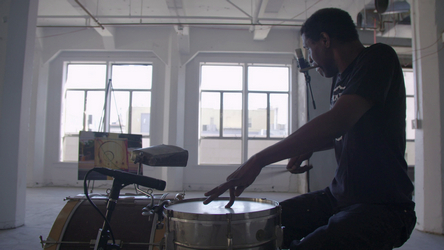 The performance that i found most captivating was 11 Postures by Borealis’ Artist in Residence, composer and percussionist Marshall Trammell. The work takes its inspiration from ‘quilt codes’, which pertain to a folk legend that slaves using the Underground Railroad network may have encrypted messages to one another through embroidered patterns and geometric shapes. Regardless of the questionable veracity of this legend, it’s nonetheless a fascinating creative concept, which in 11 Postures is explored through a new collection of specially-created ‘codes’ that act as graphic scores for Trammell to respond to.

Performances like this live or die not so much on the of integrity of their underlying concept but in the strength of their realisation, and in Trammell’s case, all 11 sections of the work were in their own ways surprising and enthralling. It no doubt helps that he’s a highly personable, even charismatic performer, a fact reinforced by the excellent brief explanations he provided after each Posture, elaborating on this thoughts and aims. For Trammell these codes are a symbol of solidarity and, ultimately, “resistance against hegemonic thought, consciousness and behaviour”, and it was abundantly clear how seriously he was treating each image. He spoke well, but he played better, that intense seriousness constantly revealing itself in Trammell’s face and body language, ruminating on the code in real time, trying to fathom its intellectual and emotional connotations, the abstract and the personal, several times appearing to finish a performance only to then carry on with additional ideas. At no point, though, did it feel as if Trammell was continuing for the sake of it, and in fact several of the Postures were very short indeed.

Despite the relatively limited palette of Trammell’s small percussion setup, his interpretative range was considerable, making each Posture unique and strongly differentiated from the others. Often, his mimicking of certain shapes in the image made him come to resemble a shaman conducting an elaborate ritual using both his body and his instruments. Indeed, the sense that physical action was just as important as actual sound permeated the work (the word ‘postures’ is obviously paramount), Trammell at times appearing to try to tease noises out of the very air around him. This literal embodiment of the codes was crucial to his performance, going beyond a mere representation of them to something altogether more authentic, a genuine synergy. It’s perhaps redundant to single out individual numbers within such a unified suite as this, but a couple of them were especially outstanding. The rapid playing in No. 6, one of the Postures that particularly highlights the essential physicality of the work, was mesmerising, its apparent surface chaos kept grounded by the bass drum (with just a hint of a pulse down there), before it too got swept up into a huge climax of hectic actions. And No. 10 brought to mind the aesthetic of, of all people, Zbigniew Karkowski, Trammell using rapid repetitions now as the basis for saturation, within which fluctuations of density and an assortment of patterns and other rhythmic ideas could be heard moving.

The conclusion of the work, Trammell using all 11 codes at once as a kind of über-graphic score, was far less focused and compelling. Yet that’s simply a testament to the stunningly heartfelt and engrossing music that had gone before. Abstract, theoretical, codified geometry transformed into overwhelmingly vital, passionate statements of fiery assertion. It was easily among the most incredible and moving displays of improvisation that i’ve ever witnessed.

All of the online performances from Borealis 2021 are available to stream online until 18 April, via the festival website.