Early last year, before life on earth tilted over into abject abnormality, i experienced a performance at the Dark Music Days in Reykjavík that, in hindsight, i perhaps summed up a little too succinctly. On the one hand, it was completely true when i wrote, of the performance given by Bára Gísladóttir & Skúli Sverrisson, that “what we heard in the first five minutes … was essentially identical to the 55 minutes that followed”. i think i made it clear that this wasn’t a negative remark – i did, after all, indicate the performance was compelling – but at the time i recall feeling that perhaps it was something of a triumph of atmosphere and style over substance and content. Therefore, despite being subsequently wowed by Bára’s solo album HĪBER, which explored a not dissimilar parallel world, when i saw that the duo was releasing a 2-hour double album of their collaboration, i have to admit to being not just intrigued but sceptical. 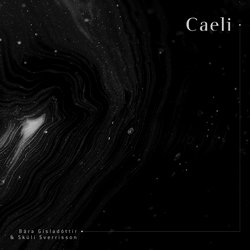 So i’m delighted to say that all of that scepticism has been emphatically and entirely proved unfounded by Caeli. It’s again true to say that what we hear in the first five minutes is essentially identical to the 125 minutes that follow – a point made more palpable by the fact that the first track lasts five minutes – though the real-time, long-term listening experience of Caeli is the most compelling new music i’ve heard so far this year.

Perhaps it makes some sense to speak of Caeli as being a kind of ‘variations on a behavioural theme’. This theme manifests in the form of a quasi-monochromatic, dark ambient environment comprising shifting quantities of cloud and rumble and wavering, wandering tendrils of melody. To call it ‘post apocalyptic’ is perhaps a bit over-dramatic, but there’s nonetheless an edge-of-the-seat tension and nervous anxiety permeating almost all of the album. Not, it must be said, that Caeli sounds especially bleak or melancholic in tone; in general its music simply establishes and explores this environment rather than being ‘afflicted’ by it. Indeed, there’s a great deal of warmth and gentleness to be heard in the 19 tracks that make up this remarkable cycle.

In some respects Caeli is difficult to write about in terms of details, as its consistency and homogeneity is so fundamental to the way each section plays out. Nonetheless, certain general aspects of the work can perhaps give some indication of the considerable range of musical ideas heard in these ‘variations’. Richness of tone is a quality that seems of paramount importance, Bára & Skúli sometimes pitting opposing extremes against each other – the double bass a fragile waif amidst threatening waves of noise – or escorting the entire unified texture through anaemic sequences of wan fragility and borderline opulent heft. Light, too, is an aspect that continually varies; i’ve characterised Caeli as being “quasi monochromatic”, and while its music does give the impression of existing only in hues of white and black (perfectly mirrored in the cover artwork), the resulting sonic chiaroscuro is stunningly nuanced and intricate. This is achieved through a mixture of register and density, the distinction between low and high creating a vivid parallel for shadow and light, the varying heaviness of the former giving the weird impression of an impossible ‘black radiance’, anti-shining like a black hole, while the former shivers, glints and, just occasionally, manages to release more focused streams of incandescence. When expressed in a less polarised way, the music at times becomes the clear product of multiple overlaid strata; here and elsewhere, drone is, if not an omnipresence, then a kind of default mode to which both instruments tend towards and inevitably return to. Whereas in other music such drones would provide a foundation, in Caeli they have all the substance and solidity of the ‘surface’ of a gas giant.

The aspect of Caeli that is arguably the most beguiling, precisely because it’s the most obviously in a state of flux, is timbre. The fact that just two instruments, double bass and bass guitar, are used (in conjunction with electronics) is only occasionally apparent. Like everything else in Caeli, the music’s timbral identity is remote and allusive, taking the illusory form of a bass clarinet in ‘cieli pesanti’, or extruding into sheets of industrial squeal in ‘anche il mare è un cielo’, and even conjuring up the notion of a swarm of bees in opening track ‘unum caelum’. Of course, Bára’s double bass is often apparent as the basis for the shapes, lines and fragments of melody searching at great height in Caeli‘s dark, all-enveloping expanse. Over the course of the album, alongside the aforementioned dronal elements, this melodic voice comes to serve as pretty much the only tangible fixed point of reference as the universe tilts and transforms around it. Directly connected to this is the music’s sense of scale: the curling filigree of the bass provides the possibility of intimacy and closeness, which finds its opposite in the seemingly endless vistas stretching as far as the ear can hear.

One of the most striking things about Caeli is the way it conveys such strong emotional weight despite being so demonstrably abstract. Depending on your mindset, the track titles may or may not play a part in enhancing that experience (for me they didn’t), but either way, the mysterious goings-on in these all similar, uniquely different tracks offer exhilarating, unsettling windows into the same wondrous, unfathomable cosmos.

Released last month by Sono Luminus, Caeli is available in both physical and digital formats.