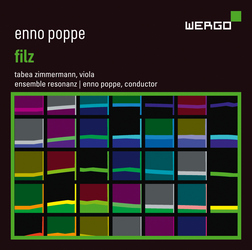 In my last article i explored a CD featuring an overview of the string music of Penderecki, and it’s been interesting to reflect further on aspects of that in relation to Filz, a new album devoted to German composer Enno Poppe – featuring Ensemble Resonanz, and conducted by Poppe – which also focuses on music for strings. There is a tentative connection between them, inasmuch as one of the compositional concerns that drove Penderecki’s radical early work, the construction of shifting sound masses constructed from collections of unique but related actions, plays a part in the three pieces on this album. Poppe isn’t working to the same ends as Penderecki, of course, and it would be pushing it to describe the music as ‘sonorist’, but the particular kind of relationship it establishes between individual players (or a soloist) and the larger ensemble is comparable.

It’s ironic that, of the three works on the disc, the one that exemplifies this best is also the least engaging. Composed in 2010, Wald utilises four string quartets in such a way that they continually slip between small- and larger-scale focus. It’s easy to imagine that the title (“forest”) hints at this – looking at one or many trees – in the way our attention is guided from individual players, to individual quartets, to a homogeneous mass of sixteen parts. Though occasionally compelling, the emphasis throughout Wald on more ‘raw’ (and to a large extent undifferentiated) forms of behavioural action tends to make it easy to glaze over for periods of time. It’s stretching a point, perhaps, but it almost brings to mind the snapping in and out of focus / attention engendered by many works of minimalism, exacerbated in Poppe’s case due to the near half-hour duration of the piece. Nonetheless, at its best the effect is potent, particular at points where generalised and specific actions occur simultaneously, such as around the centre of the piece, when tendrils start to extrude from the texture.

Stoff, for nine string players, works better, primarily because it expands beyond an emphasis on behaviour to encompass a fascinating development of its ideas. Throughout the piece it’s hard to say to what extent what the players are doing is part of a unified action, a demonstration of cause and effect, examples of imitation (though who’s imitating whom?), or simply serendipitous (or perhaps even imagined) coincidences. By contrast, it’s abundantly clear how the work’s opening network of unison staccatos slowly evolves, alongside sporadic cluster shapes, first connecting into little two-note motifs that in turn join to create the semblance of longer phrases. The progression could be heard as a gradual connecting together of isolated points of origin – literally ‘joining the dots’ – though, again, to what extent the players’ parallel actions are related often remains debatable. Not always, though, and some of the most exciting moments are where the ensemble demonstrably unites. A collapse around seven minutes in is a powerful example of this, the instruments huddled in a near-unison buzzing shuffle, as is the climactic plateau arrived at a few minutes later via a sequence of three-note clusterphrases, which Poppe renders unstable by making it sound as if the players’ attempts to smoothly work together keep jamming. Some of the mass textures that the piece passes through are completely mesmerising, perhaps none more so than at its conclusion, where a Shepard tone like effect is produced by the strings seemingly undergoing an infinite upward ascent.

The best example of interplay between individuals and groups, not surprisingly, comes in Poppe’s viola concerto Filz, which in this recording features soloist Tabea Zimmermann (recently announced as winner of the 2020 Ernst von Siemens Music Prize). Even more so than in Stoff, the success of Filz is partly due to the way the exploration of this interplay is just one aspect in an altogether more involving inner drama. As such, in some respects, Filz is more disorienting than the other two works precisely because of its twisting narrative and structure, though it’s all too easy to be convinced by the power of its drama, and by its excellent – in hindsight, clear – sense of direction. There’s a second interplay at work, manifesting in varying degrees of stability. This finds greatest solidity not simply when the viola is backed up and reinforced by the orchestra, but when both strongly push forward, becoming energised and rambunctious, as happens in its middle movement. Indeed, ‘rambunctious’ isn’t remotely an adequate word for the ear-splittingly shrill, stupendous climax that emerges from the violent but sinewy material that came before it.

Yet for all its overt strength, this isn’t where Filz is most interesting. The intimacy of the outer movements is enticing and at times quite moving. The relationship between the viola and orchestra is also more fractious, with a quartet of contrabass clarinets acting as both a friend and a foil for the soloist, providing a firmament early on when the viola is especially wavering (bringing to mind Tan Dun’s typically slip-slidy string writing) but later becoming more ambiguous, either helping to drive things forward or acting to challenge proceedings. Here, the relationship between individual paths and progressions and group dynamics are at their most variegated and beautiful, forming exquisite textures filled with falling motifs like a chorus of sighs from which tiny morsels of pitch feel their way outward and upward. Real unity is found in the final movement; though it begins more unstable than ever, its transformation into a kind of group introspection is hypnotic, melodic meandering that culminates in a gorgeous sequence of complex chords – like a weird chorale – before its close compaction is slowly loosened into soft, single-minded counterpoint. It may be one of the strangest, but Filz is also one of the most lovely viola concertos i’ve ever heard.

Released by Wergo, Filz is available on CD and digital formats.