A few years ago, in a book about ambient music that i co-edited with Monty Adkins, i wrote a chapter where i proposed the possibility of ‘meta-ambient’, the idea that a great deal of music not necessarily immediately heard as being related or even connected to ambient – as it tends to be traditionally (mis-)conceived – can and should be regarded as such. i justified this in part due to the fact that ambient, at its most fundamental level, is concerned with behaviour (rather than trivial, subjective notions of ‘prettiness’) and the way its elements are arranged and juxtaposed over time. 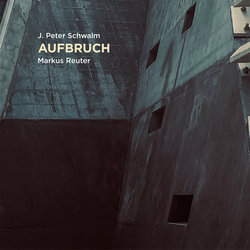 A new example of this kind of meta-ambient comes in Aufbruch, a new collaborative album from German musicians J. Peter Schwalm and Markus Reuter. Its 49-minute duration is divided up into nine tracks, but the more time i’ve spent with it the more i’ve perceived those divisions as becoming blurred, and the tracks as interconnected variations on not so much a theme as a behaviour, a palette and an attitude. Though Schwalm comes at the collaboration from an electronics-focused angle, and Reuter from a guitar-based one, their roles are similarly blurred and while their respective sounds and timbres can often be discerned they’re almost invariably treated such that the resulting music becomes a synthesis of them.

The meta-ambient connection emerges in various ways, perhaps the most obvious being how Schwalm and Reuter bring together discrete elements and allow them to drift and meander such that it’s often impossible to tell conclusively whether these elements are actually gelling, interacting and responding to each other, or whether they’re simple adjacent, the counterpoint they create a by-product of their simple juxta- and superposition. It’s a form of sonic uncertainty that, when done well, can be almost endlessly fascinating (one of the reasons why long-form ambient is able to retain its focus), and there are some nice examples of this on Aufbruch.

The nature of its elements is relatively easy to summarise: drones in various registers, floating tones, vague abstract sounds, guitar notes, and an assortment of blunted beats, though the way these are employed has a great deal of spontaneity and unpredictability. In this respect Aufbruch for the most part doesn’t demonstrate use of ‘steady states’, eschewing patterns and processes in favour of more improvisational forms of nebulous narrative. Though not an element as such, an additional recurring feature of this music is, for want of a better word, distortion: layers of buzz and fuzz that regularly coalesce and accumulate around pretty much everything else. This never takes the form of obfuscation, though; rather, it adds a palpable energy to the drones and tones, crackling and vibrating as if in response to injections of electricity coursing through them.

During some parts of Aufbruch the overall effect takes on a passivity that can cause one’s attention to drift, though whether that’s the music becoming ‘ignorable’ or not is a judgement call. It’s a situation that particularly arises during the later tracks ‘Lebewohl’ and ‘Losgelöst’, the former developing from vocal phrases (contributed by Sophie Tassignon) into a rich dronal texture with twanging guitar notes, the latter a mixture of floating middleground tones (also featuring Tassignon) and insistent foreground beats, paradoxical in the way it envelops while remaining aloof and cyclical. Elsewhere, the ambiguities of the music are more compelling, such as a sequence of buzzy pitches emerging in ‘Von Anbeginn’ that become an idea of sorts but not a melody, loosely following each other in relaxed fashion. Yet the main ambiguity is its highly dramatic sense of narrative. Especially mesmerising is the opening track ‘Der Aufbruch’, where its stable, dronal introduction gives way to the intrusion of a new note that triggers small but growing surges in response, while causing the entire atmosphere to become more and more caked in noise, a steady but thrilling development.

The best example of this drama, and the highlight of the album as a whole, is ‘Abbau’, which opens with the most clear demonstration of the aforementioned ambiguity of connectivity, its combination of dull but strong beats, side impacts and drifting upper and lower pitches keeping its options open about the extent to which they relate to or impinge on each other. This is replaced with a gradual expansion that’s beautiful to behold, all these elements becoming forceful while being held in a lovely sense of balance. When the beats drop out the greatest ambiguity of all arises, their absence simultaneously throwing clarity on everything else, revealing it to be turning like a form of mobile, yet also rendering the music more vague, as if the beats were the ‘focus’ with the other elements obfuscated by a bokeh-like blur. Its culmination is pure wonderment: a dense, complex soup of stuff, behaviourally and harmonically static yet spontaneous, like a cauldron bubbling with ingredients, to hypnotic effect.

Released last week on the RareNoise Records label, Aufbruch is available on vinyl, CD and download via Bandcamp.