Last Friday brought the first UK performance of the shortest, and by far the simplest, of this year’s Proms premières, Charlotte Bray‘s Where Icebergs Dance Away. Coming in the wake of some highly complex new works (none more so than George Lewis’ Minds in Flux) this was rather refreshing. In her answers to my pre-première questions, Bray mentioned that this work was in the process of “growing into a much larger piece entitled Forsaken“, and based on what we heard at the Proms, that proved to be both understandable and more than a little frustrating. 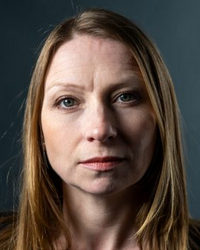 It’s frustrating because, as it stands, while Where Icebergs Dance Away certainly works as a straightforward miniature composition, it nonetheless feels unsatisfactory and limited, less like a comprehensive, argued piece than a ‘cut and shut’ of two ideas (one substantial, the other somewhat preliminary) to form a quick-and-dirty, cogent mini-structure.

That’s not in any way to suggest that these two ideas lack interest. Arranged in a clear ternary form (when did that last appear so obviously in a Proms première?), the outer idea is pregnant and quite potent: a glistening music, full of stretched out, glacial chords, overlaid with fragments of filigree. It points not to itself but to something else, something beyond, possibly grand and majestic in scale and scope. Contrasting with this is the work’s second idea, forming a brief central episode where the music lives up to its title, engaging in fleet, fizzy material that’s both more overtly forceful as well as carried along by what at times seems to be an almost dizzying implied sense of momentum (i know we’re talking about icebergs here, but to my ear i can’t help hearing real speed during this sequence).

There’s nothing inherently wrong with either of these ideas, except the way they’re juxtaposed here seems not simply dissatisfying but preliminary, like an in-progress play-through of the sketches of what will presumably eventually become Forsaken. The glacial idea returning, essentially unchanged, for the final third of the piece is strange and ineffective, its potency neutralised now as it finds itself repeated (admittedly not verbatim), now serving the role of a recapitulation. And the playfulness at the work’s core feels like so much squandered promise, a flash in the pan that goes nowhere except back to precisely where it just came from.

Bearing all this in mind, it seems almost unfair to seek to form a critical opinion about the piece. It’s adequate, i guess, but that continual sense in the music that this isn’t anything like the full story, and that it’s pointing towards something much more developed yet to come, means that it’s hard to take seriously in and of itself. i’m going to give Bray the benefit of the doubt, and look forward to hearing Forsaken in due course; but as for Where Icebergs Dance Away, it’s hard to do more than just shrug.

The world première of Where Icebergs Dance Away was given by the BBC Symphony Orchestra conducted by Sakari Oramo.

Charlotte Bray - Where Icebergs Dance Away