The saying goes that you don’t know what you’ve got until it’s gone, but in the case of the Ultima festival in Oslo, the latter half of which i experienced last week, i don’t think i truly realised how much i’d missed contemporary music festivals until i was back in the midst of one again. Bucking the trend of so many new music festivals, Ultima doesn’t adopt a theme, enabling the composers and their music to speak freely, on their own terms, without being shoehorned into prefab, homogenised notions of meaning.

Going in search, literally, of meaning was the point of Voices from your future past, an augmented sound installation created by composers Davide Luciani and Fabio Perletta, spatial sound artist Jordan Juras and vocalist Stine Janvin. The work occupied, virtually, three zones around Oslo city centre, with the sound materials presented in real-time via a smartphone app and headphones, according to the listener’s movements within each zone. This work was doubly rewarding – not only due to its own intrinsic merits, but because of the more basic fact that, after so much time being unable to travel, it was an experience that actively involved being outside, walking freely around an environment that, for me at least, was very far from home.

The three zones, each represented by a letter (though i don’t know what they meant) were situated at the Oslo Opera House (W), the Kontraskjæret park near the harbour (H), and Nedre Foss park (A), a little further away from the water’s edge. Each zone created a unique soundworld to accompany the real-world environment, two of which were primarily concerned with atmosphere. Zone H filled the space with moving bands of noise with assorted small-scale sound objects moving over them, and glimpses of something akin to calls, whistles and whispers. Zone A was more pitch-focused, featuring soft sung chords at one end of the space morphing into forceful accents at the other end, with various (unsettlingly close) scratching sounds popping up unexpectedly at different locations. Most engrossing of all was Zone W where, to the sound of (possibly) a crackling fire, Janvin’s voice quietly intoned an impassionate section from towards the end of Sophocles’ Oedipus Rex: “…if I could somehow block my ears and kill my hearing, I would not hold back. I’d make a dungeon of this wretched body, so I would never see or hear again.” i happened to be exploring this part of the work early in the morning, just as the sun was coming up, and the juxtaposition between the open clarity of the day (completely clear, no clouds) and the sharp geometry of the Opera House, with these often distorted and only partially audible words, made for a thought-provoking experience, as if (tapping into the work’s overall title) one were hearing a ghostly echo from the dark, distant past materialising in the bright morning light.

Various possible futures were hinted at in a pair of concerts devoted to music composed and performed by students of the Norwegian Academy of Music. Student concerts are always going to be the epitome of the mixed bag, and these were no exception, but i wish more contemporary music festivals included events like this: where better to give prominence to the literal newest of the new? That being said, many of these works displayed surprisingly conservative instincts, which in the radical context of Ultima made them seem all the more timid and traditional. Among the braver exceptions was Olivia Køppe Christoffersen‘s Down, down, down, there was nothing else to do, an ensemble piece that rather nicely moved in and out of periods of stability, while Anna Berg‘s klucceeckax set up a quietly engaging steady state of drifting layers, including the sounds of accordion and bells. More striking still was the String Trio by Christoffer Håård, exhibiting a multi-faceted (if rather too episodic) language of croaks and splutterings becoming drawn out to form a careful kind of consonance, before transitioning through glinting harmonics into a chorus of vaporous arpeggios. It was more about gesture than real substance, but as gestures go they were highly enjoyable, and it was excellently performed by the (sadly uncredited) students. Best of all was Ida Grande Kaurin‘s Qlikk, a work for solo accordion that gave the impression that the instrument was almost becoming sentient and learning to play itself, which perhaps doesn’t give enough credit to the actual human performer, whose rendition of the piece was mesmerising. 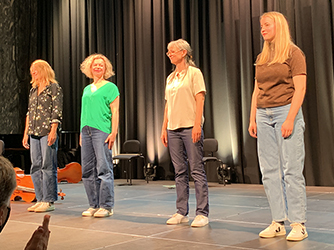 The search for meaning in conjunction with different forms of language re-emerged in a curious concert titled “Extended Composition”. Each of the two works being premièred were as concerned about the physicality of performance as with the actual sounds being made. Tanja Orning‘s Ensemble Studies was concerned with a quartet of performers (Orning, Helga Myhr, Gry Kipperberg and Camilla Eeg-Tverbakk) undergoing a graceful, coordinated and/or imitated sequence of movement that involved treating various instruments and implements as an extension of their bodies, becoming both an epicentre and a mouthpiece for expression. Like a form of avant-ballet, while the reason and direction for their actions remained elusive, their combination of playfulness and implied emotional weight (particularly during an apparent lament later on) was strangely compelling. In the case of The Hands. The Double, an electroacoustic collaboration between composer Henrik Hellstenius, choreographer Kristin Ryg Helgebostad and pianist Ellen Ugelvik, it became increasingly hard to distinguish between cause and effect. Ugelvik’s theatrical actions on a piano and synth were initially grandiose and unequivocal, hammering out chords with overblown rock star panache and energy, though the work’s subsequent development made one question the extent of her autonomy; indeed, at points she had taken on the air of a robot, a seemingly empty vessel for instructions and triggers being sent from somewhere external, though this contrasted with sequences ostensibly laden with tender tactility. 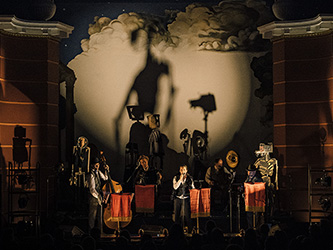 Meaning was more literally impossible to grasp in the first performance of Ludenoper (The Pimp’s Opera) by POING & Maja S. K. Ratkje, simply due to the fact that it was sung in a mixture of Norwegian and German. On the one hand, the details of the narrative – concerned with the origins of Kurt Weill and Berthold Brecht’s Threepenny Opera – were completely lost on me, yet it hardly mattered. Presented in the beautiful, almost century old, Frogner Kino, the opera’s convoluted, decadent blend – and deconstruction – of jazz, cabaret and improvisation was captivating and (especially in the case of accordionist Frode Haltli), stunningly performed. Rakje manifested something of Ute Lemper channelling Marlene Dietrich, while the trio (plus a narrator) took on a mix of sinister and mischievous roles, all wielding a collection of bizarre and grotesque puppets. Didn’t understand a word of it; loved every minute of it.