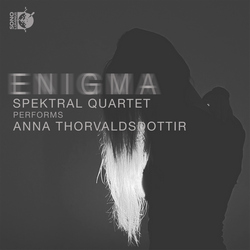 i’ve been spending quite a bit of time lately with two interesting recent releases of Icelandic music. The first is a short album (an EP really) featuring a string quartet by Anna Thorvaldsdottir titled Enigma. The first thing that struck me, long before actually listening to the music, is that it’s a title that could be applied to pretty much any of Thorvaldsdottir’s compositions. All of them unfold in a way that, while generally demonstrating logic and clarity in their long-term structures and narratives, nonetheless invariably display signs of quirk and kink, evidence of a restless creativity that ultimately won’t conform to or be bound by expectation, formality, convention or process, but insists on doing something simply because. In addition to this, Enigma continues a line of compositional consistency that has been a feature of her work for many years: the juxtaposition of stable and unstable elements.

Enigma is Thorvaldsdottir’s first string quartet, and though structured in three movements, the distinction between them could be described as negligible, with regard to the work as a whole; yet equally it’s possible to regard each movement as undergoing discrete (though connected) progressions from nascence to (quasi-)resolution. All of them get there through the presentation of gestural, textural or timbral building blocks that slowly and gingerly transform into something ostensibly more stable and concrete. In the first movement it’s like a soft but elemental depiction of the evolution of harmony, a process that plays out three times, two of them moving from basic, unstable sounds – scrape noise, shuffling friction, swishes and swoops – that first slowly become clarified and solidified as chords, and then just as slowly start to suggest the makings of a progression. The second of these is different, instead become locked as a perfect fifth, forming the drone that’s become quintessential in her work, and which is embellished by a familiar assortment of further slides and rapid sul ponticello slivers.

The second movement behaves similarly, using the same fundamental elements, but explored in two sections rather than three. The first arrives at chords through less obvious means, first dissolving its tappings, pizzicati, glissandi, friction and melodic fragments into a kind of buzzy noise chrysalis, before re-emerging as a weird, dazed squeezebox that slowly takes the form of chords. The second section channels arbitrary croaks and glitches into a new dronescape that persists through a series of oblique harmonics implications and individual bursts of filigree. The final movement isn’t subdivided, but again has an instinct towards establishing a fundamental, arriving at it through glistening glissandi and harmonics. It’s tenuously held in place through a wavering fifth, creating a curious mix of ordered and disordered materials, the latter glancing off the glacial progressions and somewhat folk-like simple melodic ideas that ensue.

i said before that all three movements move towards (quasi-)resolution, and the question as to whether or not they are, in fact, resolutions is an important aspect in making Enigma live up to its name. The music’s essential tilting – even teetering – on the edge of stability and disorder – especially when this is revisited over several movements, each time reducing the structural permutations (different attempts at the same problem? and/or different attempts to believe the problem is solved?) – calls into question just how convincing they really are at ‘resolving’ what went before. The first movement’s final chord is a juddering, dirty minor triad, the second’s is a tonic made harsh through a prominent tritone, while the third’s isn’t a chord at all: despite being the most ‘grounded’ of the movements it ends up evaporating, its constituent elements floating apart into a more ethereal form of the same friction with which the piece began.

As with pretty much all of Thorvaldsdottir’s music, i love the fact that it sidesteps – and perhaps obviates the need for – conventions of tension and resolution, resulting in music that’s impossible easily to pin down or define. It’s not simply the nature of the material in Enigma that’s enigmatic, but its purpose, direction and outcome. All of these things remain uncertain, and as a consequence each time i’ve listened to Enigma i’ve heard it as being, and doing, something different from before. Its avant-lyricism often makes it feel disarmingly moving, but the exact nature of those emotions is just as enigmatic as everything else.

Released by Sono Luminus, Enigma is available on CD and download. The full score is available to view or download via Chester Music.