Rohan Drape & Anthony Pateras – The traces of a mistake, the most simple one possible the reactions of even younger children 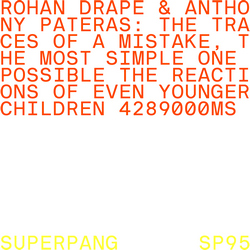 Let’s get static – or, at least, steady static. The latest collaborative work from Rohan Drape & Anthony Pateras, The traces of a mistake, the most simple one possible the reactions of even younger children, could be regarded as a development of the processes explored on their outstanding 2018 album Ellesmere. Whereas previously the emphasis had been on glacial pipe organ movement, here the instrument is joined by various others, including piano, violin (Erkki Veltheim), percussion (Maria Moles), electronics and a Revox B77 tape machine. However, this expanded instrumental palette is channelled toward similar behavioural ends as Ellesmere, establishing immersive steady states that challenge our understanding of action and interaction, cause and effect, and longer-term ideas of direction and progression.

This challenge isn’t just confined to the content of each piece but across the album as a whole, in the similarities and differences between the three tracks. One of these – the title track – is presented in two different versions, first for piano (Pateras) and electronics (Drape), and later joined by Veltheim and Moles. The other piece, Distance bestows then takes right back, is a sibling work for piano, organ and electronics. It’s fascinating to hear how, despite being behaviourally similar (even the same, in the case of The traces of a mistake), subtleties of long-forms expression that arise lead to quite different demeanours.

The quartet and electronic version of The traces of a mistake, for example, presents an environment rooted on a sustained electronic shimmer, around which noodling piano notes, glistening violin arpeggios and soft, sporadic percussion play out, occasionally flecked with scratches possibly emerging from the Revox. The overall impression is of a pretty austere form of stasis, where what stands out are the things that obviously contrast with this, such as the division between the halting, glacial passivity of the piano and the unceasing rapid activity of the violin, or the way that the drums occasionally inject the faintest whiff of more conventional improvisation tropes, suggesting (falsely) the possibility of a pulse. In this sense it’s the most enigmatic performance here, primarily because it’s so aloof.

Contrast this with the duo version that opens the album, which in some respects could hardly sound more different. While the quartet version only occasionally suggests harmonic ambiguity as part of its language (particularly during a sequence implying a lingering 7th chord), this completely dominates the piano and electronics version. From the outset, we’re drawn to making tentative connections between the piano notes and the hovering shimmer (itself the product of a close dissonance). Sometimes these notes seem to relate directly, acting like a quasi-diatonic teasing out of pitches contained or implied within the shimmer, but just as often they sound unrelated, following an independent (or entirely arbitrary) path that only overlaps by accident. This ambiguity is greatly enhanced by the way this floating harmonic underlay evolves throughout the work’s 26-minute duration, gaining considerable complexity while repeatedly evoking recognisable forms of progression, which in turn makes the piano seem by turns intimately connected or obtusely irrelevant. The resultant combination of tension and release leads to curious notions where one could almost be convinced of a cadence; imaginary, no doubt, though that doesn’t prevent the music from giving the weird impression of “resolution” in its latter stages. It all makes for a beautiful, beguiling experience.

Yet more engrossing, though, is Distance bestows then takes right back. The connections between piano, organ and electronics are asserted more clearly here – evidently all sounding in relation to the same underlying harmonic design – but they’re articulated with the greatest delicacy. The opening could hardly be more gorgeous, the piano glancing off tones present in the shimmer causing a combined effect that sounds transfixed, captivated in a reverie. Indeed, as it progresses it’s possible to hear this omnipresent shimmer, unlike everywhere else, not as something in own right but as a reverberant by-product of the tones and overtones resonating from the piano. Again, the relationships, and the nature of cause and effect, is blurred. The harmonic palette again complexifies, causing low piano chords to resemble tolling bells, answered by something akin to tinkling chimes. The complexity is greatest of all in this piece, extended through quantities of soft noise that form part of the soundscape. The uncertainty of this sequence makes the organ almost sound like it’s letting out a sigh or a sob two thirds through, but even more striking is the effect when everything simplifies again, transforming the piano into a shimmering bell, in a passage no less mesmeric and beautiful than at the start. Everything resolves, but not in an even remotely conventional way.

It’s a magnificently tranquil yet convoluted performance, the high point of this hugely impressive three-part testament to the ways that Drape and Pateras continue to reinvent what ambient can be.