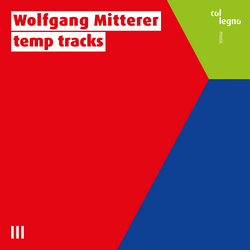 i’ve written previously about my love of large-scale compositions, so it’s been fascinating to spend time with Temp Tracks, the latest album by Austrian composer Wolfgang Mitterer, which explores music at the opposite end of the continuum. Taking its title from the film scoring practice of using extant music as a temporary soundtrack (in order to get a feel for what tone the movie requires), Temp Tracks consists of 37 miniature compositions – ranging from a mere 31 seconds to nearly 4½ minutes – each of which functions as the soundtrack to a similarly small-scale imaginary movie scene. As such, listened to in its entirety, it is simultaneously deeply immersive and wildly disorienting, making the imagination do cartwheels in an attempt to parse and process its unstoppable cavalcade of suggestive moods and allusive atmospheres.

From the perspective of conventional film scores – and most film scores these days are the absolute epitome of conventional – some of Mitterer’s tracks play into familiar ideas. The fast electronica of ‘temp’ would be an ideal accompaniment to late-night driving (it even incorporates car sounds), and the swirling mélange of ‘temper’ contains various elements that discernibly hint at tried and tested formulaic tropes (even briefly alluding to Hans Zimmer’s ‘Mombasa’ from Inception). But just as the whole album is something of a perpetual tease – both in terms of each track’s brevity and also the lack of a visual counterpart – these two opening tracks are something of a red herring, as what follows is very far from being the equivalent of a collection of generic offcuts.

A recurring characteristic of many of the tracks is the apparent coexistence of two or more discrete layers of musical thought, existing in parallel such that the extent to which they affect or even impinge on each other can often be regarded as either negligible or entirely moot. This manifests most demonstratively in the juxtaposition of a kind of floating ‘underlay’ that progresses and develops in its own way and at its own pace while sporadic loud stings unpredictably fire out like futuristic cannon fire. In ‘template’ it takes the form of a gentle, lyrical layer in close proximity to, but completely unaffected by, driving pulses below . ‘temporal’ briefly features beats attempting to go somewhere while everything else is more interested in being contemplative, until a heraldic trumpet appears; in ‘temptation’ the beats manage to get going but a parallel strain of soft, somewhat melancholic triads ultimately prevails. Hints of romantic sweep at the start of ‘tongue’ seem to be threatened by an adjacent thread concerned with wobbly bass and percussive clatter but, again, it’s calm that remains at the end.

Sometimes, Mitterer ramps up the complexity such that the discernment of layers is complicated and they start to meld and bleed into each other. The result of this in ‘temple’ is a convoluted form of stasis, where buzzy bass and potential beats sit within a light, poised soundscape littered with traces of accordion, a horse (which appears in numerous tracks), a cow, bells and various (synthetic) orchestral instruments, all of which appear to be existing in their own, discrete layer of activity while Mitterer’s hypothetical ‘camera’ shifts between them in a series of jump cuts, cross fades and crash zooms.

When the notion of layers is lost, as it often is, these pocket-size dramas sometimes resemble the kaleidoscopic yet implausibly coherent mash-ups of John Oswald. But where Oswald often tends towards the frenetic and hyperbolic, Mitterer’s narrative sensibility, as already indicated, is more restrained, even equivocal. If there’s a fault to be found in Temp Tracks, it’s in the gradual awareness that, perhaps due to their durational confines, the musical scope and dramatic range are similarly limited, Mitterer preventing any particular element from running amok, presumably simply because there’s no time for it to go anywhere significant.

But i don’t hear this as a fault at all; rather, there’s the distinct impression of a collection of sonic objects jostling awkwardly together in close proximity like elements wilfully thrown together in a reckless science experiment. In any case, the sense of ostensible limitation is greatly mitigated when Temp Tracks is listened to in its entirety. As i said at the start, it is a hugely discombobulating experience, though the growing familiarity – in terms of its scale, dramatic sense and musical / gestural vocabulary – works to unify the album as a whole and make it function as a large-scale iteration of what each track is doing in miniature. Heard in this way, Temp Tracks comes to resemble a bizarre 55-minute experimental movie constructed from 37 disparate yet related scenes that propel us pell-mell through heightened notions of tension and repose. i’m not really sure whether, at the end, we’ve progressed an inconceivable distance or have simply ended up back where we started, though the unexpectedly withdrawn, reflective epilogue (‘tonight’) indicates, if not a clear-cut outcome, then an arrival somewhere genuinely new. Perhaps Mitterer is implicitly drawing on another cinematic trope: maybe everything tangible in Temp Tracks is simply a MacGuffin, individually irrelevant sonic props that nonetheless enable his weird and wonderful drama to play out.

As someone who’s been a fan of movie scores since i was a child, i’m not sure i’ve ever felt more dismal about the nature of contemporary soundtracks, which have sunk further and further into miasmas of disposable and instantly forgettable musica generica. Though its visuals are purely imaginary, Temp Tracks is better than any film score i’ve heard this year, serving as a potent reminder of how energising and exhilarating – and memorable! – scores can be when they’re the product of genuine imagination rather than cheap, run-of-the-mill conventions and formulas.

Released by Col Legno, Temp Tracks is available on CD and download.