Something of an oddity behind today’s Advent Calendar door, and a real rarity too. Some decades ago, US composer Stephen Montague, who had developed a close relationship with John Cage, had asked Cage for a piano piece. Nothing came of this until 1990 when, in Montague’s words,

He borrowed a book … and took out a piece of paper, and began drawing this very beautiful drawing, which he then entitled ‘Variations I for Stephen Montague’. It consists of 4 lines and 5 dots. […] I made a grave mistake … I hesitated for a moment and I said, “Is that an instrumental work or a choral work?” There was a long pause, and he said mischievously, “Let’s flip a coin: heads it’s chorus, tails it’s instrumental” – we flipped a coin, and damned if it didn’t come out chorus instead of instrumental! […] I asked him, “Okay, if it is a choral work, what sort of text are we going to use?”, and he said, “Well, why don’t you use the phonemes from your name? You have some very beautiful sounds in your name.”

This graphic score, which can be seen below, was subsequently framed and displayed in Montague’s home until 2004, when he realised it for performance as part of the BBC Symphony Orchestra’s ‘John Cage Uncaged’ celebratory weekend. 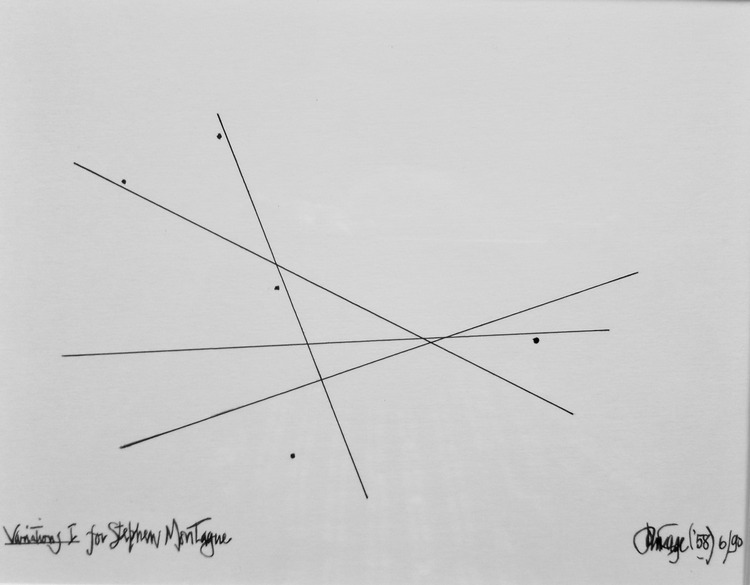 The performance process can be summarised as follows. The basses begin, progressing through the phonemes of “Stephen”, followed by the sopranos working through “Montague”. At this point, in an acknowledgement of both Cage’s decision-making process and the festival for which the performance was devised, any of the singers may flip a coin up to three times: each time, if it comes up heads, they are allowed to sing the melody C A G E (un) C A G E D, with the central “un” whispered. Then the altos progress through the phonemes of “John” and the tenors work through “Cage”. The visual arrangement of the score is mirrored by positioning the the singers in the performance space according to the arrangement of the four lines; the score then effectively moves across from left to right, each phoneme being passed from singer to singer until they’re all singing. The five dots occur roughly where they appear across the score, each represented by a short, individual percussive impact on any freely-chosen instrument.

The way this plays out is as a rather beautiful series of gradual timbral shifts between hard attacks, sustained tones and air noise, plus those five uncanny momentary intrusions of something “other”. The tones take the form of microtonal clusters, which appear to coalesce from or dissolve into the contrasting sounds around them. The exception, of course, is the C A G E melody sequence, opening out at the centre of the piece in what Montague calls a “chorale”, taking the form of a seemingly static yet continually adjusting floating major 6th chord – an oasis of harmonic clarity in the midst of dense microtonal clouds. Depending on your listening perspective, it’s fun to try to keep track of the names slowly being worked through, but equally it’s just as (if not more) engaging to become immersed in the work’s slow timbral metamorphoses.

The world première – and, strangely, to date the only performance – of Variations I for Stephen Montague took place on 18 January 2004 at the Barbican, London, performed by the BBC Symphony Chorus conducted by Stephen Jackson. As a cheeky nod to Montague’s original request to Cage, one of the five dots was played on a piano by Rolf Hind.

i’d like to thank Stephen Montague for sending me the image of Cage’s graphic score and his realisation of it, and for allowing me to share them here.