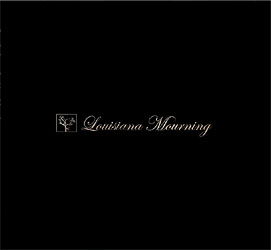 Out this week is the latest release from Benn Jordan, better known as The Flashbulb. It’s high time Jordan’s music was featured on here, as he’s nothing short of a marvel, his music touching on a wide variety of styles, every one of which seems to turn to gold in his hands. In many ways, he has to draw comparisons with Hecq (another Ben, about whom i wrote here), flitting as he also does between the crystalline intricacies of IDM and the warm shroud of ambient.

But there’s a wealth of other inspirations at work in Jordan’s music, and this is palpably obvious in his new 21-minute EP, Louisiana Mourning. Prior to the release Jordan had hinted on his website that ambient and bluegrass would be the defining characteristics of this release, and to some extent that’s borne out in the music. “I” (the titles simply use Roman numerals) is an ambivalent opener, laden with rapid guitar picking early on, before giving way to dreamy tonal waves. “II” immediately returns to fast guitar figurations, whereupon violinist Greg Hirte joins in with a lovely folk-inspired melody, inflected with poignant minor chord shifts; midway, the piano takes over, leading to the music again dissipating into ambience. It’s not the first time Jordan has subdivided a single track into markedly different sections (another similarity to Hecq), and here it’s a highly effective device, creating soft, luscious codettas that contrast well with the sharp hectic twanging of the guitar. “III” shifts in almost quixotic fashion, beginning once again with guitar, another highly pretty miniature ditty, that then switches into a smaller idea, drifting but driven, before being enveloped by wind and curiously distant, reticent chords, moving near the horizon of clarity; whereupon guitars return in a guise gently redolent of Pat Metheny, until the ambient conclusion once more subsumes everything into wetness and warmth. “IV” takes a new, jazz-flecked direction for its first half, a slightly flamenco-esque one for its second, this shortest track being the only one where ambient music doesn’t exert its influence.

If this is bluegrass, the connection is at best an obtuse one, refracted through Benn Jordan’s complex creative prism. Those familiar with his back catalogue may well be surprised and disappointed at the complete absence of the insanely frenetic beat and glitch agglomerations that are a (if not the) trademark of The Flashbulb. But Jordan hasn’t got his Flashbulb hat on here, and without it, he has on Louisiana Mourning revealed new kinds of subtlety and a distinct interest to move along some roads less travelled by. And that has, indeed, made all the difference; it’s his most introspective release to date, and as his EPs usually foreshadow album releases, it suggests very interesting things lie ahead for Benn Jordan and his audience.