Tuesday 17 August’s Proms concert brought the world première of Huw Watkins‘ Violin Concerto, the second new violin concerto heard this season. The opening movement sets a commanding tone, its fast tempo instigated by the solo violin, surrounded by pointillistic contributions from winds and upper strings, firmly drummed in place with massive bass thuds. In no time at all, the soloist seemingly accelarates… only for everything to stop abruptly, and a brief lyrical interlude ensues. Gradually, the initial mood is re-established—although not the pace, which has been seemingly blunted somewhat by the interlude. Large, looming melodic suggestions are put forward by the strings, but the violin seems quite happy to ignore them all, dancing on their surface and into another lyrical excursion; for all its romanticism, Watkins is leaving no doubt as to who wears the pants in this relationship. And this is swiftly confirmed as the violin emerges from its episode into a manic burst of notes that gets the orchestra very excited (they clearly just want to bang a lot in this movement)… whereupon, once again, all is stopped even more demonstrably than before; this violin is something of a tease, is it not? 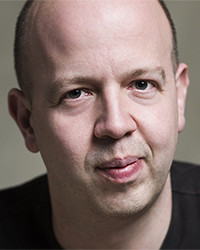 These assorted hints at lyricism are initially allowed free rein in the central slow movement, the violin charting a simplistic, broadly tonal path, gently supported by the orchestra. Support doesn’t seem to be the only thing on its mind, though, and in an asserted act of rôle-reversal, on two occasions it brutally attempts to bring back something of the driving character of the preceding movement. The violin gives short shrift to these attempted coups, however, once again riding high before dissipating them without provoking too much protest, and the movement finally subsides into a rather lovely succession of horn chords that usher in a plain, poignant descending scale.

The surprisingly brief finale initially finds the relationship between solo and gli altri slightly less frosty, with everyone getting pretty carried away, leading to the violin exploding in a blinding, frantic passage that in its ferocity is a world away from anything else it’s delivered so far. Ultimately, though, this is a violin absolutely determined to sing, and after a few minutes of this, the tone is emphatically slowed and softened, the harmonies cooled and simplified to (often) bare fifths, before evaporating completely.

At first glance, Watkins’ work is staunchly conventional: standard orchestra, three movements, fast-slow-fast, each with familiar Italian tempo indications—why, the work doesn’t even have a fancy contemporary title! What is clearly suggested here is the Classical model handed down from Mozart, and Watkins’ Violin Concerto certainly does capture the cut-and-thrust kind of concerto writing that Mozart instigated and of which he was so fond. Indeed, while there’s little sense of material development, the work arguably doesn’t need it, thriving instead on its high drama, which is superbly engaging and forms a far more cogent ‘argument’ than something more purely intellectual might have achieved.

Incidentally, after the applause has subsided, violinist Alina Ibragimova returned to present as an encore a delightful performance of the final movement from Watkins’ Partita. Her playing, throughout the concerto and alone here, was simply astonishing.

This concertos amazing, the performance by Alina Ibragimova even more so.