For this year’s Proms, Saturday 14 August was designated “Bach Day”, and buried beneath all the BWVs were two new works, by Tarik O’Regan and Alissa Firsova, both works described as ‘arrangements’. 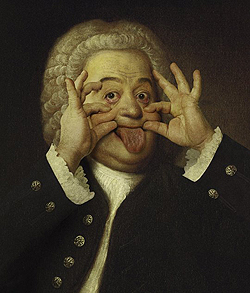 O’Regan’s approach, as he saw it, was to tease out ‘hidden’ musical lines within the opening movement of Bach’s Violin Sonata No. 3 BWV 1005. Who’d have thought that, buried within Bach’s music, was a whole load of post-John Adams material waiting to get out? The conductor, Andrew Litton, says in the interval discussion that his criterion for judging a great transcription or arrangement is “when you listen to it, you don’t wish you were hearing the original…”, and on that basis O’Regan comes off rather badly. All the same, Latent Manifest has some nice orchestrational moments, preventing it from being entirely dull.

Firsova roots herself in the last movement of Bach’s Viola da gamba Sonata No. 3 BWV 1029 and, thankfully, she doesn’t try so obviously to be seen to be clever. The title, Bach Allegro, says it all; unlike O’Regan’s work, which was nothing of the kind, this is a true arrangement, allowing Bach’s material to stand squarely in the foreground. While the orchestration is a little dry, there are some beautifully quirky moments, including an amusing brief dialogue between tubas and piccolos (Berlioz would be proud), as well as a hilarious bit of counterpoint proffered by, of all things, a flexatone (Gordon Jacob would be proud). It’s by far the superior offering, and the audience was clearly able to perceive that as well.

Both works were given their first performance by the Royal Philharmonic Orchestra conducted by Andrew Litton.