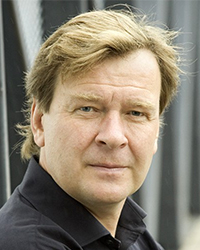 A little over a week ago, on 13 October, came the first UK performance of Magnus Lindberg‘s new orchestral work, Al largo, given by the London Philarmonic Orchestra under Osmo Vänskä. The title is an interesting one; as well as suggesting the musical term, associated with considerable slowness, the expression in fact refers to “being offshore, specifically referring to the moment when you reach the open sea and you don’t see the coast anymore, and what is before you is vast” (from Lindberg’s programme note).

The opening is all grand fanfares, dominated by the heavy brass (but nicely flecked with muted trumpets), out of which emerges a music in search of its own momentum. Bass drums make leaden stabs at something pulse-like, the rest of the orchestra respond with an inchoate morass of melodic tendrils; with Lindberg’s title in mind—and without wishing to get too Donald Tovey about it—this opening episode is highly suggestive of a boat slowly gathering speed. The grandiosity of the moment isn’t over-stated, however; Lindberg treads carefully through the momentous triads and imposing bass pedals, peppering the texture with softer woodwind flourishes, introducing a rapid chromatic motif that will become important later. After a short time it becomes clear that a pulse—at least, a clearly delineated one—isn’t a prerequisite for momentum, and the music charts a new path, one made particularly vibrant by the strings’ lush chords. More fanfares ensue, and the music seems to expand sideways, now capturing the kind of epic vista Lindberg spoke of in his programme note; within it, the harmonies coalesce briefly on assorted tonalities, barely glancing them before instantly moving on. These fanfares assume ever greater importance, eventually bringing about Al largo‘s first climax, in which the bass drum positively thunders out with gusto. This becomes the trigger for (forgive me) a sea change; Lindberg escorts the strings to the foreground, endowing them with an episode of strange but gorgeously rich material. It’s the first time that a sense of stasis—or, at least, brief repose—enters the piece; the sudden shift to introspection is an unexpected, exquisite moment. The strings’ material is intoxicating, a spell Lindberg allows to shimmer for several minutes before breaking it with the brass, who usher in more tattoos and a second climax, the strings rushing back into focus. A scurrying piano is the cue for the orchestra to ebb, leaving a solo oboe, its filigree melody embellished by some cartwheels in its upper register.

The second half of the work is dominated by dense textures, heavily redolent of Scriabin’s orchestral writing in their intricacy and continual state of flux. It’s difficult to catch hold of anything for very long—echoes of both the chromatic motif as well as the fanfares are heard but quickly forgotten—yet far from being disorienting (still less confused), the result is exhilarating, with more than a little sense of expecting the unexpected. Lindberg keeps the scope broad, even hinting at vast chorales lurking beneath the surface; for a time, the music even takes on a filmic quality, a new rhythmic idea hinting at the soundtrack of a certain über-mensch. Scriabin’s spectre (and, momentarily, Mahler’s) hovers even more forcefully towards the work’s conclusion, in both the melodic figures as well as the occasionally strident tonalities on which they’re founded (and even, to an extent, in the orchestration). There are times when the tonal protrusions, elsewhere so carefully integrated into the overall fluid sense of harmony, seem a little forced—a sense of “the end’s in sight”; or perhaps, in keeping with Lindberg’s programme, “Land ho!”—but the last few minutes are sufficiently curious and disarming that such concerns become moot. Far from having a big finish, Al largo ends in a place of unexpected quietude; the string and woodwind tendrils emerge again from the fabric, quickly dissipating to leave an oboe and clarinet to conclude the proceedings, given uncanny drapery by a cold string chord. It’s a far cry from the bluster and hullabaloo that’s been so much a part of Lindberg’s musical voyage, and the fact he wraps things up without an all-too-obvious final climax makes the work very much more interesting and, indeed, satisfying.

“Al largo” is an unusual title. This is the fastest music I’ve ever written, yet somewhere deep down there is a feeling of a very slow undertone and a very slow momentum, something large and wide in terms of expression. For a long time I already had an idea that I should call the work something contradictory—not something indicating a fast piece but, rather, something like Adagio or Largo. I then happened to speak with Luca Francesconi, an Italian composer who is a good friend of mine, and I asked him what would go well with “largo.” He suggested that I use the Italian expression “Al largo,” which means being offshore, specifically referring to that moment when you reach the open sea and you don’t see the coast anymore and what is before you is vast.

Al Largo is full of fanfares and joyous noises, but somehow its main structure falls into two halves, both of them starting very energetically and ending up as slow music. I like the sound of the word largo and I like the historical ballast of the word largo; even when you put it into the context of the Italian meaning of its name context, the piece remains abstract, musically.

One of my earliest ideas with regard to this project was to create a big piece, but I didn’t want to use a huge orchestra since I had done that many times in the past; I wanted the work to be more constrained, played by a smaller ensemble, and a perfect masterpiece in that category is Ravel’s Ma Mère l’oye (Mother Goose), which is a gorgeous piece, particularly in the way that Ravel builds up tremendous expression with smaller resources.

Another work that became very important to me was Schoenberg’s Verklärte Nacht. For me, the most beautiful moment in music history occurs at the end of that work. I actually worked in a one-bar quote from Verklärte Nacht at the end of Al largo. I use my own melodic material on top of it, but there is a real, small gesture toward Schoenberg. I’m still fascinated by that moment in music history, when tonality somehow collapsed. I’m sort of like an archaeologist; in a way, I want to go back to that moment when tonality was still cold. I’m the archaeologist coming from the future, looking into “Could there be another way to go? Could there be another direction?”