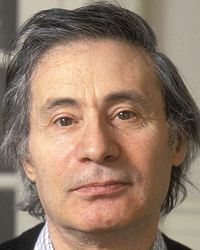 Today’s featured Alfred Schnittke concert was broadcast on 14 January 2001, and comprised two monumental pieces, the Cello Concerto No. 2, with Torleif Thedéen taking the solo role, and the dual-named Symphony No. 5 (Concerto Grosso No. 4); Vassily Sinaisky directs the BBC Philharmonic. More than the others, this recording has suffered the effects of time (and, possibly, previous attempts at cleanup); there’s some crackle audible in the performances as well as the speech, and to add insult to injury, on the original recording (made on cassette) i neglected to use Dolby. So—despite my best efforts—my apologies for the sound quality, although the performances are so good that (for the most part) they transcend these problems.

Completed in 1990, Schnittke’s Cello Concerto No. 2 is a work that dives into high lyricism at the outset, the cello’s opening gambit pitched towards the top of its compass, followed by an extensive meditation at the opposite end of the pitch spectrum, ushering in a loud declamatory statement from the orchestra; throughout this short opening movement (Moderato), the orchestra’s role is restricted to punctuating the ends of the cello’s lengthy meanderings. While it seems as though the soloist is going to stay ponderous for some time, the second movement (Allegro) abruptly establishes a tempo, and a fairly brisk one at that. The orchestra gets excited once again, but falls back almost as quickly as before; only the brass engage with the cello, although from a distance. Things continue in this vein for a while, until a more pointillistic idea initiates more assertion in the orchestra, seemingly placing their notes in the momentary gaps left by the soloist. They construct a curious waltz that fizzles immediately into a strangely sparse string chorale, in which a flexatone can just be heard. Aggression breaks out; it’s clear this is an orchestra profoundly irritated at being sidelined, and they seem to form packs that assault the soloist from all directions; for the cello’s part, its material, ever in flux, is thus instantly forgettable and yet projects itself as though each and every leaping note was agonisingly important. At the movement’s crashing final beat, one is left breathless and wondering where things stand; in this performance, there’s a significant pause at this point, which adds to the drama.

When the third movement (Lento) does finally begin, it’s almost imperceptibly, hovering in the middleground, wary of projecting force of any kind. Cello and orchestra are as one here, united in a music that, while it couldn’t be called an outpouring (it’s too reserved for that), seems almost crushed by the weight of its emotion; semitones are flattened into quartertones, causing held notes to waver unsteadily. Attempts at something emphatic are short-lived, the soloist falling back into shimmering backdrops and leaden bass chords. An occasional cutting twang from the harpsichord—doing nothing; going nowhere—only makes the mood more desolate; and yet, having practically shrugged itself out of existence, the cello summons up sufficient energy to launch a final melodic offensive, heaving itself up and bringing about the fourth movement. Marked ‘Allegretto vivo’, the cello is quickly thrown into a loud and oppressive melée, responding with a frantic line that seems almost beyond its capabilities to continue. The cello’s domination of proceedings in the first couple of movements now seems very distant, subjected as it is to constant onslaughts from the instruments, their gestures calculated for maximum impact and bite. As in the previous movement, the cello makes another stab at the impressive lyrical stance it took at the outset, only to be shot down instantly by the full force of the entire orchestra. And so we enter the vast final movement, ‘Grave’, which opens with a funereal brass cortège borne upon deep bass pedals. A passacaglia is established, and once again soloist and orchestra work together in a unified expression. And what expression it is: Schnittke draws on material from his score for Elim Klimov’s Agony, the title of which perfectly captures the inconsolably distraught character of this music. While, for a time, there’s the sense of something being worked through (or, at least, confronted), the orchestra increasingly parts company from the cello, which, after a massive eruption from the orchestra, is left beside itself, bereft of any sense of direction—or, indeed, any reason to carry on. Yet, it does, quietly crying to itself, lost and alone.

Symphony No. 5 (Concerto Grosso No. 4) dates from 1988, and its convoluted title betrays the difficulty Schnittke had in making it fit neatly into either category. This large-scale conflict of forms is a writ large manifestation of the fundamental schism that permeates each of the four movements; it may not seem possible, but the work inhabits a yet more extreme emotional place than the Second Cello Concerto, its violence nothing short of vicious, its melancholy abject, exhausted, beyond mere despair. The opening Allegro seems to chug merrily along, laden with cheerful, even saccharine, pasticheries, but as it progresses, the momentum becomes uncomfortable, suggesting a movement taking place under duress. There’s a particularly striking middle episode where, above the distant chatter of the harpsichord, a violin courageously picks out a melody in an incredibly high register, barely controlling it before sliding ignominiously back down to earth. The orchestra grows oppressive, and during the final moments climaxes in a deafeningly militaristic display. Schnittke slows the pace slightly for the second movement (Allegretto), but enters a sound-world light years away from its predecessor; several minutes are spent in a weird, directionless manner, the strings painting pale streaks of contrast against a bland backdrop. But what follows is so much weirder; the orchestra gets its hands on fragments of Mahler—from the second movement of his unfinished Piano Quartet, which he attempted in his mid-teens—and tries to make some headway with them. The effect is like music played with boxing gloves; attempt follows attempt, any semblance of coherence lost in a morass of overenthusiastic bombast. The orchestra having broken down, Mahler’s unadulterated original material emerges, as heard from afar, its delicacy all the more exquisite in the wake of such gauche bowdlerisations.

The tempo slows further (Lento) for the work’s lengthiest movement, opening with ominous intonations in the sonic depths. A contrabassoon melody, blanched on either side by timpani and tam-tam, yields to a potent idea from the brass, restrained but hinting at awesome power. Schnittke unleashes his pent-up energy gradually, in stages, at first wildly acidic, later more defined, but always shockingly raw. It’s a long while before anything remotely lyrical appears, and even then it’s a music that hobbles, wounded, misshapen and percussively bludgeoned beyond recognition. The ghostly apparition of a chorale, answered by deep bass phrases and upper string trills, is a chilling moment; there’s a violent backlash, but even that slumps down exhausted within moments. The movement seems to recommence: contrabassoon moves to brass again, now trying counterpoint; the strings weigh in, and a vast tutti is pummelled into existence as if from nowhere. For all its aspirations, the orchestra just seems merely loud, its gestures vapid rather than epic; and the abrupt halt at the end of the movement—the trombones part-way through a (seemingly) important phrase—emphasises the emptiness of it all. Having reached a brisk if redundant Allegro, the work returns to Lento for its last movement. First shy, then harsh, it settles into a quiet, regular gait, suggestive of the final walk to an execution. Despite excursions elsewhere, this is the ultimate fate of the movement, climaxing in a large-scale death march, concluded by drained, drawn-out repeated notes in the brass.

Works little known to me so many thanks for posting these..I've dipped in and out of the world of Schnittke..Sometimes I find it forbidding..Other times I get engaged..Looking forward to hearing these recordings..I've heard the Rostropovich reading of the 2nd Cello concerto so am interested to see how this performance strikes me..Thankyou.

I have an excellent copy of the Sym5/CG4 conducted by Sinaisky if you want it to replace your crackly copy. I’m pretty sure it’s the same recording, recorded digitally directly from Radio 3 in 2001. It’s in mp3 format – encoded at 192kbps. Email me if you want me to send it to you.