Last Thursday’s Prom was an all Austrian affair, opening with the world première of Thomas Larcher‘s Concerto for Violin, Cello & Orchestra; Viktoria Mullova and Matthew Barley were the soloists, pitted against the BBC Scottish Symphony Orchestra conducted by Ilan Volkov. 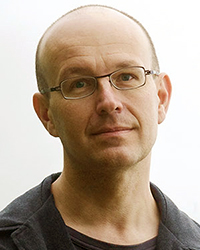 Beforehand, one wondered if it might prove to be the most tantalising new work heard this year; alongside the twin soloists, Larcher has included a peculiar concertino quartet comprising accordion, electric zither, percussion and prepared piano (played by Larcher himself). Within minutes, though, it became abundantly clear that we were in very similar territory to that explored by Pascal Dusapin in his String Quartet/Concerto ‘Hinterland’/’Hapax’ three weeks ago. Throughout the first movement, Larcher, too, is hyperactive almost to the point of absurdity, but certainly well beyond the point of irritation. His material feels like the result of a large-scale collage, one put together from microscopic, barely-similar fragments. There are, admittedly, notions of unity in the movement—an occasional returring motif, and an oscillating chord progression redolent of film music—but they can do little to prevent the music from coming across as skittish and schizophrenic. For all their bluster (and there’s a shedload of it), not once do the soloists, the concertino or even the orchestra suggest they’re presenting something of real substance or importance. There are some lovely initiatives of melodic invention, but swiftly they become subsumed in furious but empty arpeggiations capped with gruff accents, the aural equivalent of vigorously shaking an Etch-a-Sketch™, wiping the slate clean. The quieter episodes that are interspersed about the mayhem contain some touching, even captivating moments (most notably the threadbare chorale towards the end), but they’re prevented from being taken seriously, even at times seeming comic in such a madcap context as this. Larcher is, to be sure, no idiot, but his opening gambit is most definitely “full of sound and fury, signifying nothing”. As for the second movement, Larcher—continuing the non-sequitur tone of the piece—opts for a largely unsullied C major tonality. Tim Rutherford-Johnson speaks truth in his programme note when he states the resultant music “speaks with Stravinskyan clarity”, but if only it contained some Stravinskyan imagination. In every sense of the term, this is incidental music, its rare clarity revealing only how startlingly little it has to say; as such, it’s disappointingly in keeping with the piece as a whole, conveying little beyond mere superficial interest.