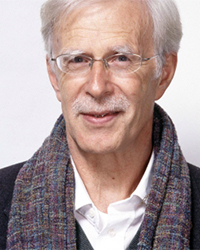 Yesterday evening, in Birmingham’s Symphony Hall, Jonathan Harvey‘s large-scale new work for choir and orchestra, Weltethos, was given its first UK performance. The opening event of Birmingham’s London 2012 Cultural Olympiad, when one considers the legacy and reputation of Harvey together with the combined forces of over 300 performers – the CBSO joined by their full choral complement of Chorus, Youth Chorus and Children’s Chorus, plus two conductors (Edward Gardner and Michael Seal) and a speaker in the form of renowned actor Samuel West – in a work of 80 minutes’ duration, it’s hardly surprising that the superlatives and hyperbole had started to fly before even a note had been sounded. Expectations could hardly have been greater, nor hopes higher. To my amazement, they were all emphatically quashed.

Weltethos certainly doesn’t fail in terms of scope or ambition, setting a lengthy text by theologian Hans Küng that seeks to draw on common values from six of the world’s great faiths and philosophies, Confucianism, Judaism, Hinduism, Islam, Buddhism and Christianity. Speaking of these values, Küng says that “[they] need not be invented anew, but people need to be made aware of them again; they must be lived out and handed on.” Yet the problems with Weltethos begin right here. The six values—1) humanity, 2) the so-called ‘golden rule’, that we don’t do to others what we wouldn’t want done to us, 3) non-violence, 4) justice, 5) truth and 6) love—are all deeply significant and important aspects of our interactions one with another, but Küng frames them in such a pallid, dry way that they feel entirely theoretical, one step removed from anything approaching genuine emotion and feeling. Brief paragraphs from each religion’s sacred texts are used to allude to the six values, but in a flat, narrative fashion that seems entirely self-defeating; surely Küng was aiming at a kind of moral/ethical rally cry, but what he’s produced is as motivating as a party political broadcast.

Despite these flaws, Jonathan Harvey clearly believed he was able to tap into something deep and ineffable within Küng’s text. He describes his approach to the words thus:

Hans Küng’s text is in the form of a huge Lied with six similar strophes, each one a movement. Within a typical movement, first there is an orchestral prelude. Secondly follows the Speaker’s introduction to the culture and principal figure of the culture, also giving some background to the ethical ideas he expresses. Thirdly there is a shadowy whispered exploration of some of the sounds made by the Speaker’s words, for chorus and orchestra. Fourthly there is a subsidiary choral statement of some text from the culture. Fifthly there is a climactic choral statement of a principal text from the culture. Sixthly comes the Refrain, for children’s choir. As in the other movements, the orchestra is playing too. 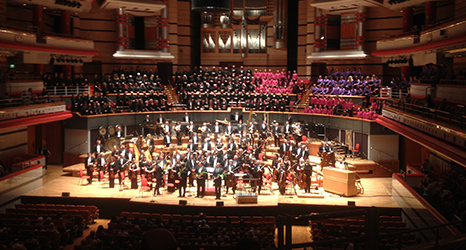 Bearing in mind the problems of alienation with the text, such a bald, analytical description as this may seem even more disheartening. Yet Harvey’s words echo the kind of descriptions Olivier Messiaen used to give for his own compositions, belying the astonishing depths of emotion and insight captured within the music. But the challenges Küng presented ultimately seemed far too great to overcome. From a structural perspective, Harvey left unaltered Küng’s piecemeal text—exacerbated on this occasion by leaving some passages in the original German—which actively undermines the (admittedly dubious) religious unity it seeks to convey by compartmentalising each faith in its own section, the texts kept decisively apart from each other. Sonically, there was something extremely exciting in the opening sections of the first two movements; Samuel West’s warm, impassioned delivery of the portions of narrative were matched with genuinely thrilling music in the orchestra, made otherwordly by some wondrously stomach-wobbling low notes from the organ. But the passages of whispering that followed were far too long, their accompanying music irritatingly obtuse. Thankfully, these don’t persist into the later movements, which put greater emphasis on choral writing and more demonstrative orchestral material. But these bold, lengthy perorations, quite clearly radiant at their extremities, were repeatedly blighted by textures in the orchestra that were frustratingly unclear—and in Symphony Hall, arguably the most transparent acoustic in the land, that’s saying something. Maybe Harvey composed a few intricacies too far, it’s hard to tell (the BBC broadcast goes some way to improving the situation), but the result often served only to obfuscate and render yet more distant the already aloof text. Only occasionally did the music seem to lift from the page and display a real sense of life, and almost without fail these were the passages where the orchestra was playing alone. Even the loveliest choral moments (and there were many) foundered at the hands of the text, and this includes the children’s refrain, undoubtedly heartfelt in theory, but an increasingly annoying series of empty, nagging shouts in practice.

Harvey’s gift for exquisitely luminous, delicate writing was apparent at various points in the work, but some of the most striking moments were when delicacy was put aside in favour of more simple, unfussy statement. The third movement, focusing on non-violence, was a superbly-judged exercise in what could be called “non-combative bombast”, its bullish swagger and pounding rhythms emanating from a sense of earnestness rather than anger; and the climactic sixth movement, to all intents and purposes exploring love (but labelled, rather limply, ‘partnership’) opted simply to overwhelm us all with extended outbursts of richness and colour, outbursts that only slowly faded away to leave a kind of glowing haze in the orchestra, the embers of what was, for a while at least, an incredibly intense musical fire.

For moments as wonderful as these, it was worth spending time with Weltethos, but all the same, i can’t recall a concert experience that’s left me so crestfallen. Over the years, Harvey’s music has been a constant in terms of imagination and ingenuity, as well as being one of the only truly radical western engagements with the sacred, eschewing the cheap theatrics and platitudes that bedevil so much contemporary ‘sacred’ music. So to hear such an uninspiring fizzle of a work come from such an esteemed composer is a profoundly shocking disappointment. When one imagines the huge amount of time, money and effort that must have been put into this project, Weltethos may unfortunately prove to be the dud of the decade.